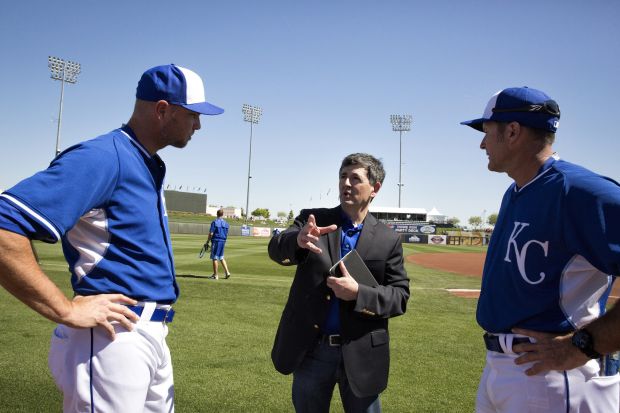 GLENDALE, Ariz. (CNS) — The crack of the bat is a sure sign of spring, one that calls Ray McKenna to the field.

“How’s the team looking this year?” he asked the top trainer for the Texas Rangers. “Anything we can do? Please let us know,” he told catcher Tyler Flowers of the Chicago White Sox.

The Washington-based attorney was busy checking in with baseball players, coaches, trainers and fans at spring training camps in Arizona and Florida.

McKenna though was not dispensing batting tips or offering legal advice. He was there to make sure Catholic players have access to the sacraments and to share the good news.

A former minor-league baseball chaplain, McKenna is the founder and president of Catholic Athletes for Christ. He said the 10-year-old sports ministry has a two-fold mission of service and evangelization.

“The service is to provide the sacraments to the players so the players are able to practice their faith,” he said. Evangelization, he continued, “is simply a fancy word for going out and sharing the good news and telling people that God is good.”

McKenna said he saw a need for the formal sports outreach while working as a lay chaplain. He could impart spiritual messages and support to athletes, but he could not provide the sacraments.

“The result of that logically was that players were leaving the Catholic faith and becoming so-called non-denominational, born-again Christians and not understanding and receiving the fullness of our Catholic faith,” he said.

Catholic Athletes for Christ now has a cadre of priests it works with to make sure that athletes can go to confession and celebrate Mass at stadiums, club houses and practice fields, accommodating their game schedules. It also coordinates events with the Vatican’s Church and Sports office within the Pontifical Council for the Laity and with the Knights of Columbus.

Msgr. Ned Brockhaus, a priest of the Diocese of San Diego, is active with the Catholic group and is the chaplain for the Padres. He celebrates Sunday Mass in the Padres’ press room when they are in town. 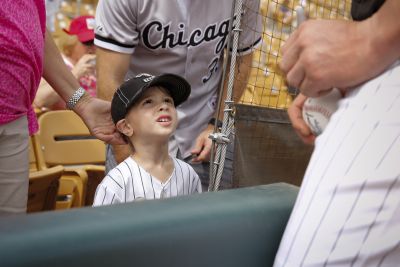 A young fan looks up to Tyler Flowers of the Chicago White Sox as the catcher signs baseballs during spring training March 11 at Camelback Ranch ballpark in Glendale, Arizona. (CNS photo/Nancy Wiechec)

A baseball fan since he was a boy, the priest considers himself a missionary to the sport. He said he helps players to “keep their faith alive” and give them some reason to come to Mass.

He said pro athletes have a lot of demands and pressure — and unique needs. “I try to help them in the unusual life that they lead.”

Spring training, the yearly passage to opening day, is just one stop on the Catholic Athletes for Christ’s annual agenda. The organization holds a yearly retreat for baseball players and is also working to build stronger relationships and initiatives with the national football, hockey and basketball leagues.

It has a program for middle school and high school athletes. With more than 100 chapters in formation, “it’s growing like wildfire,” McKenna said.

If baseball mirrors religion in its rituals, then for Catholics one might say that Mike Sweeney of the Kansas City Royals is a key evangelist.

Sweeney, the team’s former first baseman and now special assistant, was recently named to the club’s Hall of Fame. He is chairman of the athletes advisory board for Catholic Athletes for Christ and sponsors a Catholic baseball camp for kids. With his wife, he runs the Mike and Shara Sweeney Family Foundation, which supports youths and pro-life initiatives and encourages unity between Catholics and Protestants.

On a practice field in Surprise, Arizona, McKenna caught up with Sweeney and they chatted with Royals relief pitcher Ryan Madson, who will become a fully fledged Catholic at Easter. A talk given by Sweeney had inspired Madson to learn more about Catholicism and enter the Rite of Christian Initiation for Adults program.

Their conversation was interrupted by fans calling out to Sweeney for autographs. He graciously accommodated them, and with his signature added a Bible reference.

“We got a good Scripture for ’em,” Sweeney said as he signed and passed back a fan’s souvenir baseball.

McKenna watched most of the Royals-White Sox matchup from the Kansas City dugout. It ended with a White Sox 6-2 win.

On his second day in Phoenix, McKenna met up with Bishop Michael F. Olson of Fort Worth, Texas, one of 22 bishops who serve on Catholic Athletes for Christ’s board. He was taking some vacation time and had tickets for that day’s game between the Chicago White Sox and the Texas Rangers.

When asked which team he was rooting for, Bishop Olson answered with prudence. “I’m rooting for a well-played game.”

“I am a loyal lifelong Chicago White Sox fan,” he admitted. But said as bishop of Fort Worth he also cheers for the Rangers. And his third-favorite team? “Whoever plays the Cubs,” he quipped.

McKenna, Bishop Olson, catcher Flowers, Msgr. Brockhaus and Jaime Reed, the senior director of medical operations for the Rangers, stood talking near home plate at the Camelback Ranch ballpark. The White Sox-Rangers game was to start in about an hour.

Reed told Catholic News Service that he often prays the rosary using a knotted string made by his daughter. On his way to work or on the way to the ballpark, “it just kind of balances me a little bit, kind of put my priorities in the right place,” he said. “It lets me know that I don’t have to worry about a lot of things, but God’s got it under control.”

Flowers said he appreciates the work of Catholic Athletes for Christ and the chaplains.

“They do a great job helping us,” he said. “We can have Mass at the stadium at the majority of places we go.” He added that Sunday Mass is a “good refresh, a good reset” for the beginning of his week.