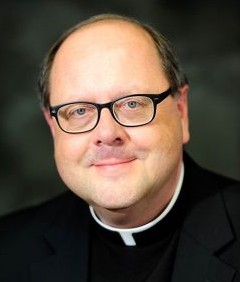 WASHINGTON (CNS) — Pope Francis has accepted the resignation of Bishop Lawrence E. Brandt of Greensburg in Western Pennsylvania, and appointed as his successor Father Edward C. Malesic, judicial vicar of the Diocese of Harrisburg.

Bishop Brandt, who has headed the Greensburg Diocese since 2004, is 76, one year past the age that bishops are required by canon law to tender their resignation to the pope.

Bishop-designate Malesic, 54, has been judicial vicar and secretary of canonical services in Harrisburg since 2006.

The changes were announced in Washington April 24 by Archbishop Carlo Maria Vigano, apostolic nuncio to the United States.

The newly named bishop will be ordained and installed during a July 13 Mass at Blessed Sacrament Cathedral in Greensburg.

“This is an office that I never strove for nor expected,” said Bishop-designate Malesic, describing his shock when he received a call from Archbishop Vigano telling him the pope was appointing him to Greensburg.

“But now that reality is setting in, I must thank God who has blessed me so much in this life and in the priesthood,” he said at a morning news conference. “It has been quite a journey so far and I suppose there is much more to come — and the people of Greensburg are going to be a huge part of my journey from now on.

“I am grateful to Pope Francis for placing his confidence in me. I do not feel deserving of it, but I am accepting of it,” he added. “I love Pope Francis, and the way he has asked us all to examine and deepen our personal relationship with God. I give him my loyalty and devotion.”

Bishop-designate Malesic thanked Bishop Brandt “for welcoming me so warmly.”

“When you called me last week, you told me that I am inheriting a gem of a diocese. I know that you have worked hard to keep it sparkling during times of change. The Catholic community here owes a debt of gratitude to you,” the newly named bishop added.

In Philadelphia, Archbishop Charles J. Chaput called Father Malesic’s appointment as the fifth bishop of Greensburg “a moment of joy for the Church in Pennsylvania. I’m confident that he will carry on the work of his predecessors with joy and fidelity.”

The bishop-elect’s “wide ranging pastoral and administrative experience” the Harrisburg Diocese “will serve him well in the office of bishop,” Archbishop Chaput said. “He also possesses a keen understanding of Catholics in our Commonwealth and the issues facing our Church here. He will be a gift to the people of Greensburg and I welcome him enthusiastically as a brother bishop.”

Archbishop Chaput also offered Bishop-elect Malesic “heartfelt congratulations on behalf of the priests, deacons, religious and lay faithful of the Archdiocese of Philadelphia. And I pray that the Holy Spirit will strengthen him as a successor of the Apostles.”

The Diocese of Greensburg was founded in 1951 with the appointment of Bishop Hugh L. Lamb — an auxiliary bishop of the Philadelphia Archdiocese — as its first bishop. The diocese covers 3,334 square miles. Out of a total population of about 665,700 people, just over 144,000, or 22 percent, are Catholic.

Edward C. Malesic was born Aug. 14, 1960. He received a bachelor’s degree in 1983 and a master’s in divinity in 1987, both from the Pontifical College Josephinum in Columbus, Ohio. He was ordained a priest of the Diocese of Harrisburg May 30, 1987.

Bishop-designate Malesic holds a licentiate in canon law from The Catholic University of America in Washington. He served as an auditor in the ecclesiastical tribunal, 1996 to 1998, and as defender of the bond and canonical consulter for the tribunal, 1998 to 2000. He has served as judicial vicar and secretary of canonical services in the Harrisburg Diocese since 2006.

NEXT: Archdiocesan choirs warming up for big concerts