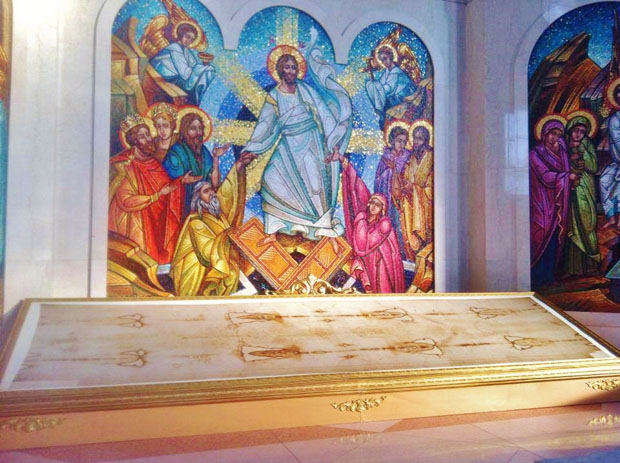 PHILADELPHIA (CNS) — More than 2 million visitors are expected to view the famed Shroud of Turin during a rare public display at the Cathedral of St. John the Baptist in Turin, Italy, over the next two months.

A trip to see what many Christians believe is Christ’s burial cloth is probably out of reach for most people, but for Catholics and others in the United States, there’s an alternative: A full-size, Vatican-authorized replica on permanent display in Philadelphia.

The replica is situated in front of a mosaic of Christ’s resurrection in the city’s golden-domed Ukrainian Catholic Cathedral of the Immaculate Conception.

Archbishop Stefan Soroka of Philadelphia, who is metropolitan of U.S. Ukrainian Catholics in the United States, procured the replica, according to an archdiocesan news release. It is the ninth such replica to be sanctioned by the Vatican.

The cathedral welcomes visitors on Wednesdays and Saturdays. Visiting hours and the cathedral’s location can be found at http://ukrcathedral.com.

Pope Francis authorized the public display of the shroud in Italy to help commemorate the 200th anniversary of the birth of St. John Bosco, a 19th-century priest from the Turin region who was a pioneer in vocational education, worked with poor and abandoned children and founded the Salesian order. 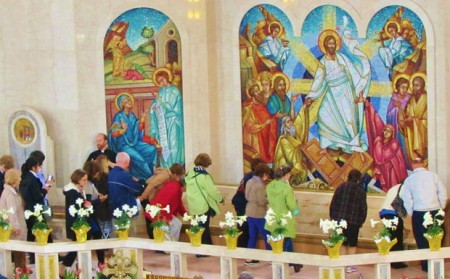 The 14-foot by 4-foot shroud bears the photonegative image of the front and back of a man whose wounds correspond to the Gospel accounts of the torture Jesus endured in his passion and death.

The church has never officially ruled on the shroud’s authenticity, emphasizing instead the shroud’s importance in helping people reflect on the person of Christ, the human dimension of suffering and the mysteries of death and everlasting life.

The cloth continues to be an invitation to reflect on the Passion, Resurrection and Incarnation, which in turn inspires and calls people to reach out to others in need, said Archbishop Cesare Nosiglia of Turin at a morning Mass April 19 marking the official opening of the venerated icon’s exposition to the public.

“The shroud invites us to never let ourselves be beaten down by evil, but to overcome it with good,” said the prelate, who is papal custodian of the shroud.

The pope was scheduled to visit Turin June 21-22 and was to venerate the shroud.