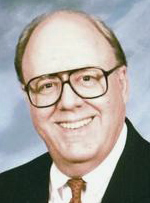 Deacon Richard L. Stoughton, 72, a permanent deacon assigned to Our Lady of the Rosary Parish in Coatesville for more than a quarter century, died suddenly on March 28.

He was born in Philadelphia the son of the late Maxwell L. Stoughton and the late Helen (Smith) Stoughton. After graduation from Villanova University he served in the United States Army during the Vietnam War era. He married his wife Joyce (Luff) on April 30, 1966 and they have one son, David.

A resident of East Fallowfield, he was the owner and operator of Client and Stoughton, an advertising, communications and marketing firm.

An active parishioner and CCD teacher at Our Lady of the Rosary, he entered the diaconate program and was ordained May 29, 1988 by Archbishop Anthony Bevilacqua at the Cathedral Basilica of SS. Peter and Paul.

Deacon Stoughton was also active in the parish Pre-Cana Program and RCIA. Although he officially retired from ministry in December 2013, he continued to assist at the parish.

It was on Palm Sunday while he was vesting for participation at the Mass for the parish he loved that he was suddenly stricken and died in the sacristy.

“He was very loyal and devoted,” said Father Thomas Brennan, the pastor of Our Lady of the Rosary. “During my time as pastor he was mostly doing weekend ministry but he was doing religious education, retreat work and youth ministry among other things.”

Deacon Frederick Kerr, who is also a permanent deacon at Our Lady of the Rosary, will always remember Deacon Stoughton for “his constant smile no matter what. He was a really nice guy,” Deacon Kerr said, “and his Joy was always at his side.”

A viewing for Deacon Stoughton was held Tuesday morning, April 7 at Our Lady of the Rosary Church followed by the funeral Mass celebrated by Bishop John J. McIntyre.

Among the concelebrants were Father John Ferrence, O.S.A., and Father Brennan who was the homilist. The deacon of the Word was Deacon Kerr and the deacon assisting at the altar was Deacon M. Eugene Favinger, an ordination classmate.

In addition to his wife and son, Deacon Stoughton is survived by his grandsons, Bradley and Maxwell.

Interment was at All Souls Cemetery, Coatesville.

NEXT: Franciscan sister, a native of Ireland, dies at 81