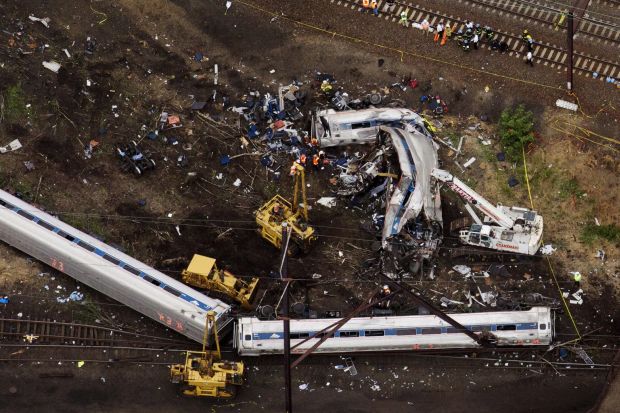 Emergency workers look through the remains of a derailed Amtrak train in Philadelphia May 13. Philadelphia Archbishop Charles J. Chaput urged prayers for all affected by the May 12 derailment in the city's Port Richmond neighborhood that left at least six people dead and injured more than 200 others. (CNS photo/Lucas Jackson, Reuters)

PHILADELPHIA (CNS) — Philadelphia Archbishop Charles J. Chaput May 13 urged prayers for all affected by the Amtrak train derailment in the city’s Port Richmond neighborhood that left eight people dead and injured more than 200 others.

“I urge all people of goodwill to join me in extending prayerful condolences to those mourning the sudden loss of a loved one and in asking the Lord to bring healing to all those suffering physical and emotional anguish in the wake of this incident,” he said in a statement.

“Let us also pray for all of the first responders, emergency personnel, and medical professionals who have been working to assist those affected by the derailment,” he added. “May God bless and protect them.”

(See a related story of local religious tending to victims of the disaster.)

Amtrak’s Northeast Regional Train 188 heading from Washington to New York derailed around 9:30 p.m. May 12. Aboard were 238 passengers and five crew members.

According to an AP story, the train derailed as it was going around a curve in the Port Richmond area, leaving the engine and two cars standing upright. Three other cars fell on their sides, and a sixth car was flipped over almost on its roof.

A team from the National Transportation Safety Board was on the scene by early morning May 13 to lead an investigation into the cause of the accident.

U.S. Transportation Secretary Anthony Foxx said his agency would work with the NTSB “to conduct a thorough investigation into the cause of this devastating event.”

Among the 200 injured who were taken to local hospitals were at least eight people listed in critical condition. Most people were treated and released.

As of noon May 13, local officials said a passenger identified as Rachel Jacobs remained missing. A CEO at ApprenNet, a Philadelphia-based company, she was returning home to New York City when the train crashed.

Philadelphia Mayor Michael Nutter described the crash scene to reporters as “an absolute, disastrous mess. I’ve never seen anything like this in my life.”

At a press conference May 14, the mayor confirmed eight fatalities after the body of an unidentified person had been discovered during the recovery efforts.

In a statement released May 13, Vice President Joe Biden said: “Our thoughts are with every person who is grieving right now from this terrible tragedy. As a nation, we pray for the victims and their families.”

“Amtrak is like a second family to me, as it is for so many other passengers,” he said. “For my entire career, I’ve made the trip from Wilmington (Delaware) to Washington and back. I’ve come to know the conductors, engineers, and other regulars — men and women riding home to kiss their kids goodnight — as we passed the flickering lights of each neighborhood along the way.”

NEXT: Sirens call priest, religious to scene of train wreck