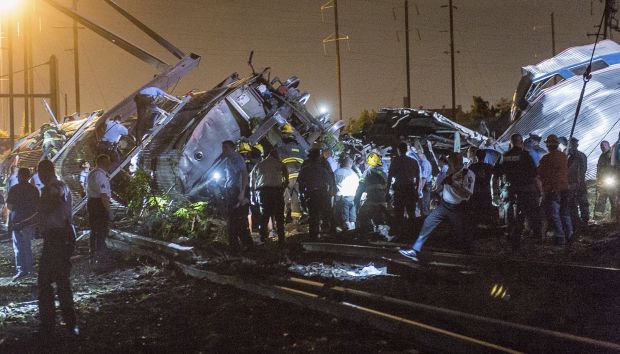 Rescue workers search for victims in the wreckage of a derailed Amtrak train in Philadelphia May 12. At least seven people died and eight others were in critical condition as a result of the crash, a doctor from Temple University Hospital said the morning of May 13. (CNS photo/Bryan Woolston, Reuters) 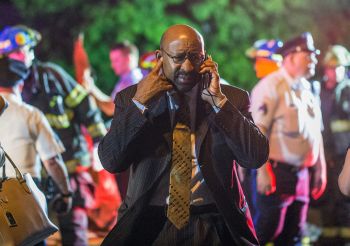 If you live in the country, the sounds of the night may be the chirping crickets. In the inner city, more often than not it is the wailing of police sirens.

Father Tom Higgins was minding his own business watching television in his rectory at Holy Innocents Parish in the Juniata Park section of Philadelphia on the evening of May 12. St. Joseph Sisters Linda Lukiewski and Julie Sertsch were doing the same thing at St. Joan of Arc Convent not far away in the Harrogate area.

As a matter of fact, because of parish closures Joan of Arc is a mission chapel of Holy Innocents and Sister Linda does evangelization and outreach in the neighborhood, while Sister Julie’s day job is ministry at the Romero Center in Camden, New Jersey.

Tuesday night the sirens were more persistent; obviously many police cars were in the area. Sister Linda’s first reaction was, “a policeman must have been shot” because “that generates a great police response.”

At about 9:30 p.m. news came over the television there was a train wreck near Wheatsheaf Lane and Frankford Avenue. It was Amtrak’s Northeast Regional train 188, which started in Washington, D.C., and was headed for New York City.

The immediate area where the train derailed with some cars overturned and smashed was near a sharp curve and also the junction where trains headed to southern New Jersey are switched to other tracks. There would be at least seven deaths from the disaster and many injuries.

“That’s only two blocks from here,” Sister Linda exclaimed when she heard the location. The two sisters hurried over to get as close as they could and try to help in any way.

Meanwhile Father Higgins, also mystified by the persistent sirens, heard the same news report, and realizing he was now the closest priest to the scene he decided to drive over.

He could only drive halfway before hitting the roadblocks and walked the rest of the way.

It was chaotic when he arrived as close as he was permitted. A helpful police officer directed him to a spot where some passengers whose injuries did not require immediate transportation to a hospital were to be placed on buses to be taken to a triage point, in this case the Webster Public School a very short distance away.

After not meeting any of the people at the designated site, Father Higgins went to the Webster School himself and found Sisters Linda and Julie were already there, assisting as best they could.

He was able to talk to some of the families and comfort them.

“I spoke to a family from Singapore here on vacation; there were two daughters, a brother and sister-in-law. The parents had already been sent to Einstein Hospital. The rest were OK except one of the girls had badly injured her leg. They put her in a wheelchair and the family went to another hospital.

“I didn’t have to give anyone the sacrament of the sick or last rites. No one there was that critical, thank God,” he said.

Meanwhile Sisters Linda and Julie had arrived just as the Red Cross and paramedics were setting up.

“We brought them water, cookies and coffee,” Sister Linda said.

Those people who did not have injuries sufficient to require further treatment were free to go, and while Amtrak would eventually provide transportation to their destination it was not immediately forthcoming because the railroad was shut down.

Sister Julie offered to drive a group of five people to Trenton, N.J., where hopefully they could continue the rest of their journey. When they arrived in Trenton there were no trains running north from there either. Although three of the people either had cars or family to pick them up, a young married couple who were headed for New Brunswick had no means to get there.

Without hesitation Sister Julie drove them to New Brunswick before returning to her convent for a scheduled 7 a.m. departure on a planned trip to Vermont.

For all three — Father Tom, Sister Linda and Sister Julie — there wasn’t a need to put their lives at risk although they would have done so.

“We didn’t do anything spectacular,” Sister Linda said. “We just tried to do what we could and it was no more than as Christians we should do.”

NEXT: Seven men one step away from priestly ordination Saturday