Archbishop: Time to ‘refocus on the basics’ 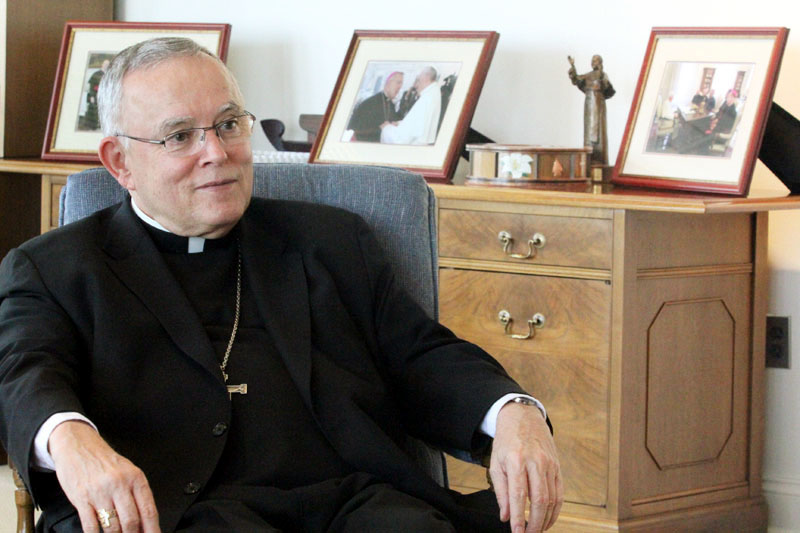 Archbishop Charles Chaput discusses the Philadelphia Archdiocese and the coming World Meeting of Families and visit of Pope Francis to Philadelphia. (Photo by Sarah Webb)

For all the opportunity the World Meeting of Families presents to strengthen families and invigorate the Archdiocese of Philadelphia, Archbishop Charles Chaput is looking forward to one thing in particular this September.

“I’m looking forward to it being over with,” he said during a wide-ranging recent interview (see the full transcript). “I say that jokingly but I mean it. It’s an extra responsibility that requires a whole lot of my time. I haven’t had a normal year yet as a bishop (of Philadelphia).”

Archbishop Chaput looked back over his past four years leading the Philadelphia Archdiocese during perhaps the most tumultuous period in its 200-year history, and ahead to the historic World Meeting of Families and the visit of Pope Francis to the city this September.

He recalled that his first year beginning in September 2011 was occupied with dealing with the fallout from the second Philadelphia grand jury report on sexual abuse of children by some priests. The following year saw the revelations of tens of millions in annual operating losses for the archdiocese’s central administration and hundreds of millions in underfunded obligations to pensions, insurance and other funds.

Last year and this were consumed by planning for the Sept. 22-25 families’ congress expected to draw at least 20,000 people from 150 countries and up to 2 million for the papal Mass on Sept. 27.

“I’m looking forward to 2016 as an ordinary year in the life of a bishop,” Archbishop Chaput said. “I hope that I can do the things bishops ordinarily do rather than handle specific kinds of crisis situations.” 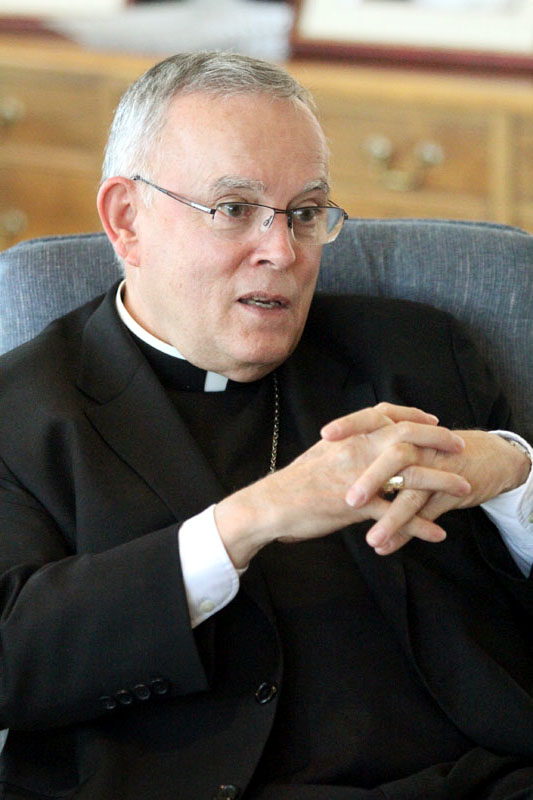 Among the things he enjoys most are parish visits and spending more time with priests and candidates for priestly and diaconate ordination.

In addition, “I’d like to refocus on the basics,” he said. “We need to reorganize our family life ministry and our marriage preparation ministry, and I want to give personal attention to those kinds of things, not just delegate that to the Family Life Office.”

One of the stated goals of the World Meeting of Families is to rejuvenate the Catholic community in the archdiocese. Besides the financial crisis and the challenges to priestly morale over the past four years, parishioners have endured painful parish mergers. All of these elements created an underlying crisis of confidence among many Catholics in the archdiocese.

As he travels among parishes Archbishop Chaput sees some signs of encouragement among parishioners, but not everywhere.

“It depends on where I go. People are genuinely and understandably upset about losing parishes, and some people have not accepted that yet in places where we’ve found it necessary to (merge parishes),” he said. “Other places, I get a lot response from people saying they’re happy we’ve made the decisions we have, in terms of trying to get some order in the chaos of our finances.”

Identifying the crux of the issue for the 219 parishes of the archdiocese, the archbishop said, “We have an excessive amount of buildings for the number of practicing Catholics today. And it’s really important that we don’t let all our resources go into maintaining unnecessary buildings. We have to make sure the resources are going into preaching the Gospel, and new initiatives of evangelization and re-evangelization.”

He added some people seem enthusiastic about the changes in parish landscape while others remain hesitant. “They don’t know yet whether they think that we’ve turned the corner or not. I think it’s important to be realistic about that. It’s a very large diocese and people feel differently in different locations.”

Looking at the archdiocese as a whole – finances, parishes, ministries and schools – Archbishop Chaput described it as stable, acknowledging that people whose parish was closed might not agree.

“All those people are part of the diocese, even if it’s a small minority,” he said. “It’s a concern to me because they’re as much the church as anybody else. But I have to be persistent in standing firm on the decisions we’ve made because the decisions are made for the good of the whole.”

But he added, “I really do think we are in a better place than we were three and a half years ago.”

And the events coming this September, he suggested, hold promise for a boost in confidence.

“I think the World Meeting of Families does present us with a great opportunity not only for the strengthening of family life, which is basic to all of us, but also in having confidence in ourself as a church,” he said.

“To pull this off, to be the host for the World Meeting of Families at a very important time in the history of the world regarding what family means and what family life is all about. I think we’re going to do a great job and it’s going to give us confidence because we should be grateful for the opportunity and proud of what we’re able to do.”

He said he hopes the congress “convinces everybody in the diocese – the families but also our clergy and those who work full time for the church – that we need to focus on supporting and strengthening families. Everything else – whether it’s schools, youth ministry, care for the aged, helping poor families — all of it really flows from family life. We have a great opportunity here to formally connect all those in our minds as well as our actions. It will be interesting to see what happens.”

He said he was “deeply grateful” for the enthusiasm of people in the archdiocese who “want to be part of this great adventure.” They talk to him often about the coming events “both in terms of the massiveness of the scale of this — they’re astonished over what’s going to be necessary — but also they’re happy, they want to participate,” he said.

The issue of poverty is an important one to Pope Francis and one he is likely to address during his visit to Philadelphia Sept. 26-27 and during earlier stops in New York and Washington, D.C. But Archbishop Chaput underscored the difference between donating money to organizations that help the poor and Catholics actually getting to know the poor, and becoming poor themselves.

Pope Francis is “calling us to be personally involved with the poor. He’s not calling for us to have the government do more for the poor, although it could happen that’s what needs to be done,” the archbishop said.

“But he’s saying we find our salvation and we also find our conversion in a personal relationship with the poor and you can’t delegate that to others, whether that’s the government or even Catholic Charities.”

The archbishop praised Catholic Charities’ social ministries, “but if we just give money and don’t have a personal involvement with the poor we’re missing a great opportunity,” he said. “We need to be present in their life. We need to love them as well as serve them. And we have to become poor ourselves, which is the message that people don’t want to hear. 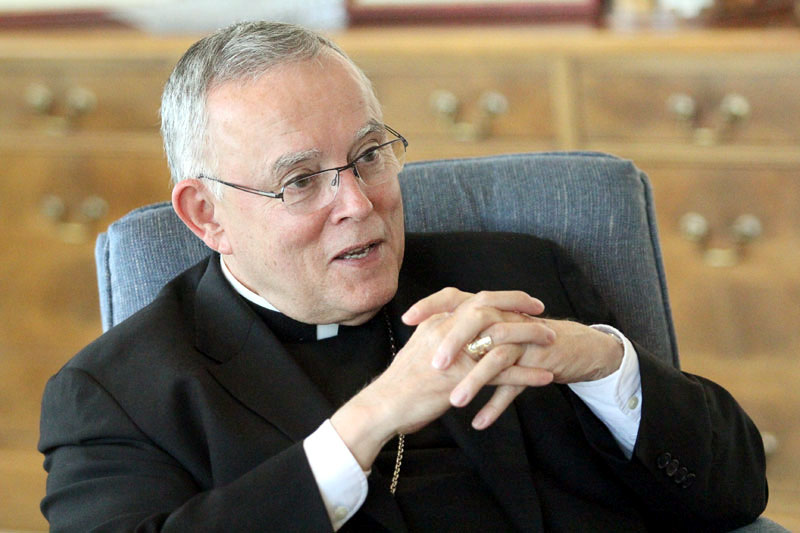 “So I think that’s one of the unique contributions of the pope to the conversation of our time, and I hope he brings that up when he’s here. We have some wonderful things here but not enough people are personally involved in helping the poor.

One of the fruits of the papal visit, the archbishop said, would be “if we commit ourselves as individual Catholics to do something about this personally.”

The archbishop said he hopes Pope Francis would also speak about religious freedom, sexual abuse of children, Catholic education and immigration, “which is another important issue that we don’t seem able to face as a country in an adequate way,” he said.

If there is to be an intensification of faith among people, whether or not it is the result of a “Francis effect” following the pope’s visit, the signs will be recognizable.

“It will mean that the poor are cared for, that people pray intensely,” the archbishop said. “We’ll see an increase of vocations to religious life and to the priesthood. Priests and religious come from families so we need families that have children, first of all, and who want their children to be committed to Christ for those kinds of vocations to flourish.

“The signs will be a renewal of commitment to the church by going to church on Sunday but also being involved in the ministry of the church in the world.”

Thanks to a one-on-one meeting Archbishop Chaput had with Pope Francis in February in Rome, the pope will have a sense of the state of the Philadelphia Archdiocese, including its recent struggles, its parish life and relations with civil government.

“I wanted him to know the diocese he was coming to visit,” the archbishop said. “He seemed to be relaxed and serene about everything. He is very much looking forward to coming to be with us.”

PREVIOUS: Seven men one step away from priestly ordination Saturday

NEXT: Clergy appointments announced in archdiocese