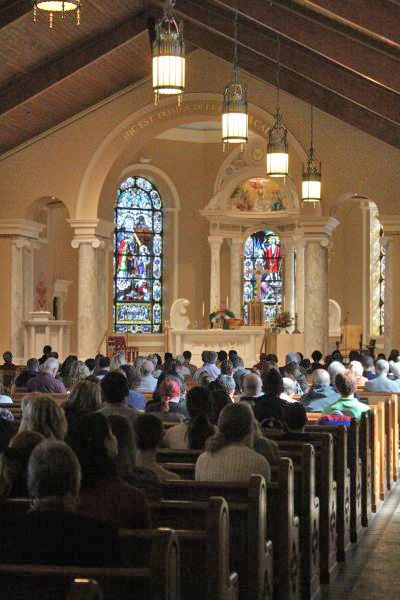 The interior of St. Bede Church during Mass.

St. Bede the Venerable Parish in Holland, Bucks County, will mark its 50th anniversary on Sunday, May 31 with a 12:30 p.m. Mass celebrated by Archbishop Charles Chaput, followed by a gala banquet. Since that time the parish has seen growth in population and in buildings, but even more so in the strong sense of community.

The actual founding date was May 26, 1965, which happened to be the anniversary of the death of St. Bede, an English theologian in 735 A.D. (By the way it was St. Bede who popularized A.D. — Anno Domini, the year of Our Lord — in the Christian world.)

Father James Martin was the founding pastor and his first Masses were held in the auditorium of nearby Villa Joseph Marie Academy. He quickly went to work and within six months a rectory was built on the present parish campus. This was quickly followed by a school under the direction of the Sisters of St. Casimir. The church was completed in 1967 and a convent the following year.

Father Martin served until his death in 1978, and was succeeded in turn by Father William Faunce, Father Peter Slane and Father Eugene Gordon “Father Gordy” Cusick.

It was Father Cusick who established the parish’s Perpetual Adoration Chapel and built the St. Katharine Drexel Center, which houses a new school wing, parish offices and a gymnasium. St. Bede’s has a special connection to St. Katharine in that the family of Amy Wall, the child whose cure from deafness was the canonization miracle for St. Katharine, were parish members.

The present pastor, Msgr. John Marine, was appointed in 2005. By that time St. Bede was becoming one of the largest parishes in the Archdiocese of Philadelphia with well over 10,000 parishioners. It was Msgr. Marine’s task to conduct a capital campaign for an extensive $5 million renovation of the church, completed in 2011.

The result seamlessly incorporated beautiful stained glass and other sacred artifacts from the former Most Blessed Sacrament Parish in Southwest Philadelphia, which in its heyday was the largest parish in the archdiocese.

“I’ve got to tell you it was just an average parish,” said Tony Canuso, one of the founding parishioners, who with his wife, Joan, raised eight kids in St. Bede’s. “Msgr. Marine really brought it to life. We have a nice school; I go to the adoration chapel once a week and also stop in a couple of times a week for 10 minutes or so.”

Under Msgr. Marine a number of new committees, organizations and events were established including a Teen Advisory Council, Teen Choir, Evangelization Committee, CCD Advisory Board, Women’s Club, Knights of Columbus, an annual parish picnic, a Patriotic Concert in the summer and an annual Passion Play in Lent.

The school, which has combined with Assumption B.V.M. School in Feasterville as St. Katharine Drexel Regional School on the St. Bede campus, has approximately 350 students. The recently added St. Francis Center houses the Youth Ministry and Parish Nurse Program as well as a first-ever preschool.

“There is a tremendous sense of community here,” Msgr. Marine said. “I have never seen such a sense of Christian community as there is at St. Bede. As a testimony to the generosity of the people, Bishop Herbert Bevard spoke at our Masses recently about his diocese in the Virgin Islands and the collection was thousands and thousands of dollars.

“Thanks to our team captains every hour, day and night, is covered in our Adoration Chapel,” Msgr. Marine said. “People come from other parishes to pray there.”

Kathy McVeigh and her husband are more recent arrivals. When they came to their very first Mass five years ago, she was amazed when people came up to them and welcomed them. Now their two boys are in the school, her husband helps with CYO and she will begin teaching in the new preschool in the fall.

“There are a lot of activities for all ages,” she said. “The priests connect well with the people of the parish. We were involved in our previous parish, but it wasn’t like this.”