In bronze statue of Christ, a lasting gift of beauty 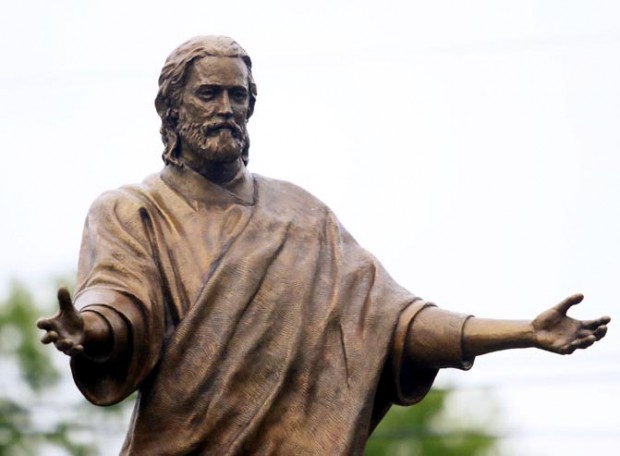 "Welcoming Christ," the new statue that greets all visitors to Archbishop John Carroll High School in Radnor, was dedicated May 21 at the school. (Photo by Sarah Webb) 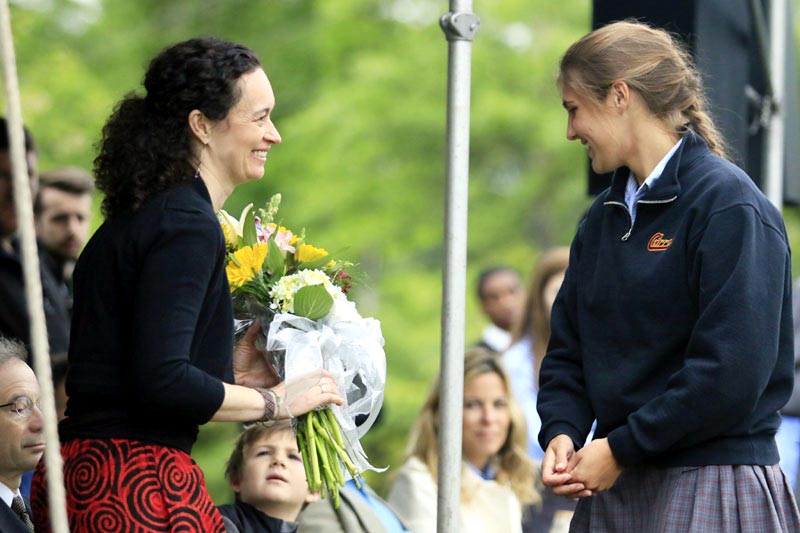 It was six years in the making from concept to completion and well worth the effort. The heroic bronze statue of Christ titled “Welcoming Jesus” facing the highway is indeed a welcome addition to the entrance of the campus of Archbishop John Carroll High School in Radnor.

The statue measuring 12 feet high, including the five-and-a-half-foot base, is the work of Lawrence Joseph “Doobie” Nowlan Jr., a 1983 Carroll graduate and gifted sculptor who is best known in the Philadelphia area for his statue of sportscaster Harry Kalas at Citizens Bank Park and in New York for a Port Authority Terminal statue of Ralph Kramden, the iconic Brooklyn bus driver depicted by Jackie Gleason in the television classic “The Honeymooners.”

“Welcoming Jesus” was unveiled, blessed and dedicated May 21 by Auxiliary Bishop Michael Fitzgerald, who oversees Catholic education in the Archdiocese of Philadelphia, before a gathering of an estimated 2,000 students, faculty, archdiocesan Catholic education officials and alumni.

The only person of importance missing was Doobie Nowlan, who died suddenly at age 48 in 2013 after his part in the project, the sculpted clay figure of the image from which a mold would be created and the statue would be cast, was essentially completed. He was represented at the unveiling by his widow, Heather Nowlan, who came down from Vermont for the ceremony.

The genesis for “Welcoming Jesus” was a presentation by Doobie Nowlan at a career day assembly at Carroll. A daughter of Marita Coffey Finley, class of 1986, spoke about it at home and her mother, an ardent Carroll booster, called Nowlan that same night with the proposal that he create something meaningful for the high school. 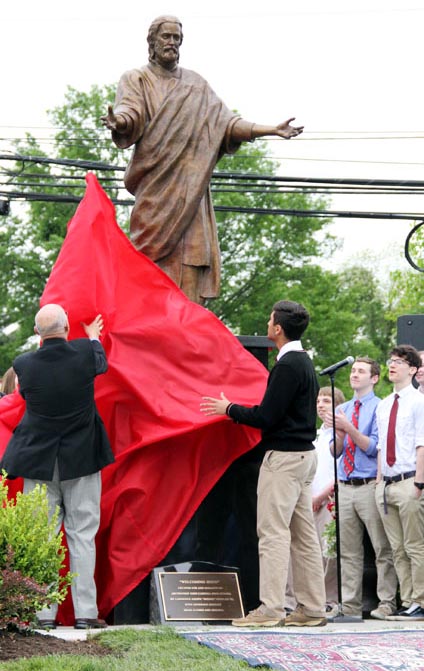 The statue is unveiled May 21 at Archbishop Carroll High School. (Sarah Webb)

He readily agreed, and the alumni set to work to raise the necessary funds to have his work cast in bronze and do the necessary site preparation among other costs.

“He is certainly gone too soon, but he showed us his passion and he used his God-given gifts and talents to give back, to motivate, to enlighten and inspire,” Finley said at the ceremony. “Now each and every day we have this incredible reminder of his love and goodness and the awesome potential within each of us.”

Clearly the most powerful words were those given by Heather Nowlan.

“I still think of this piece in clay,” she said. “This is how Doobie’s sculptures always started out. He would create the piece in clay using his hands and tools until he was satisfied a mold could be made.”

As his wife explained, Doobie’s Vermont studio was in an unused church that still retained its stained glass but was cleared of pews. At the time of his death “Welcoming Jesus” dominated the center of the building.

“After his passing I would go there searching for answers,” she said. “I knew he wasn’t there but he was there in his spirit, his soul and his art, and (he) allowed that art to guide me and teach me.”

Their little son and daughter, now in kindergarten and second grade, would also play in the studio. They adored using their dad’s tools and clay to fashion little works of their own.

She recalled her husband counseling students to find their passion as they moved into the real world.

“Doobie found for him making sculpture was living his dream,” she said, “raising his young children with me in the mountains of Vermont and New Hampshire. He accomplished a lot in the 13 years I knew him.”

Nowlan left the students with two quotes from her late husband: “Life isn’t a dress rehearsal, it is now or never” and “The things that come easy to you are of less value to you than the things you struggle to accomplish.”