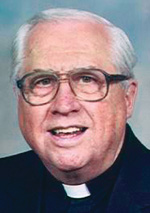 Born in Philadelphia, the son of the late Edward Benedict Gallagher and the late Anna (Boyle) Gallagher, he attended Our Mother of Sorrows School, St. Thomas More High School and the University of Pennsylvania before entering St. Charles Borromeo Seminary.

He was ordained May 19, 1951 by Bishop Hugh L. Lamb at the Cathedral of SS. Peter and Paul, with his first assignment in hospital ministry at All Saints Chapel, Philadelphia.

He also had secondary assignments on the archdiocesan Parish Sites and Boundaries Commission and as an auditor for the Office of the Metropolitan Tribunal.

Mary Costello, who was his secretary at St. David’s, remembers him as “a quiet man and a good priest. There was never a hard word between us,” she said. He loved to walk and would often walk to the cemetery to pray where his parents are buried.

Although he retired in 1992, some members of the parish kept in touch sending cards, and visiting, Costello said.

Msgr. Richard Bolger, who succeeded Father Gallagher as pastor of St. David’s, called his predecessor “someone who never blew his own horn. He wasn’t looking for praise but he told it like he saw it, and there is no question he was a good faithful priest.”

The Reception of the Body for Father Gallagher will be held at 9 a.m. on Friday, May 29 at St. Francis Center for Rehabilitation and Health Care, Darby, followed by a viewing and 11 a.m. funeral Mass celebrated by Bishop John J. McIntyre.

Concelebrants include Msgr. Daniel Sullivan and Father William Dombrow, and Msgr. Bolger, who will be the homilist.