A winding road leading to the altar 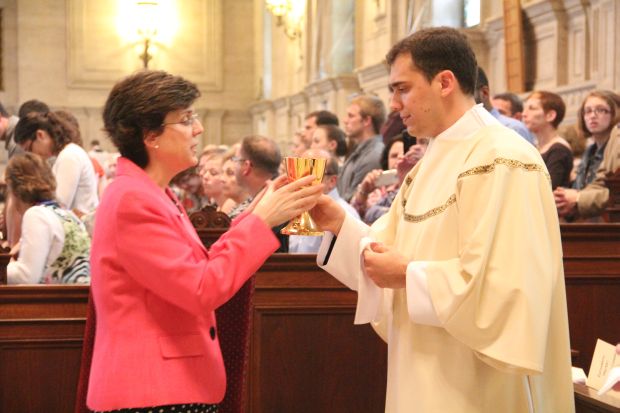 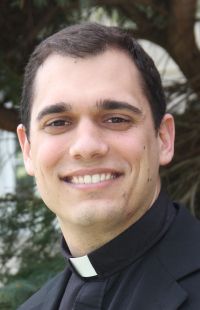 In the summer of 2013, a long-armed Dan Arechabala played a pickup basketball game against a group of guys at a parish, all hailing under 5 foot 8 inches.

Dan played defense on one player who hadn’t made a basket that game. The player dribbled down the lane, picked up the ball for a layup, then dribbled again when he saw Dan.

“So I stopped,” Arechabala said. “I stopped following him, and I just called a travel.”

The player continued to the three-point line and drilled his first shot of the night to end the game.

“Game’s over,” said the opposing player, exhilarated on the floor. “Game’s over!”

Dan was ready to let it go, but his teammates weren’t.

Arechabala saw the man several times in church afterward, but he wouldn’t look at Dan or return his attempts at acknowledgment.

That ability to relate attracts people to Rev. Mr. Daniel Arechabala, soon to be ordained a priest for the Philadelphia Archdiocese. He and his six other classmates will be ordained Saturday, May 16 at the Cathedral Basilica of SS. Peter and Paul, and his first Mass will be Sunday, May 17 at 11:30 a.m. at Mother of Divine Providence Church in King of Prussia; Father Patrick Welsh will be the homilist.

“He’s really approachable,” said Rev. Mr. Addisalem Mekonnen, a classmate and friend of Arechabala’s and another soon-to-be priest. “He’s very generous in serving others in their need.”

Arechabala first experienced the call to priesthood at a young age.

As a 5-year-old, Dan turned to his mom at Mass and asked why the priest used a plate instead of a bowl for the paten. 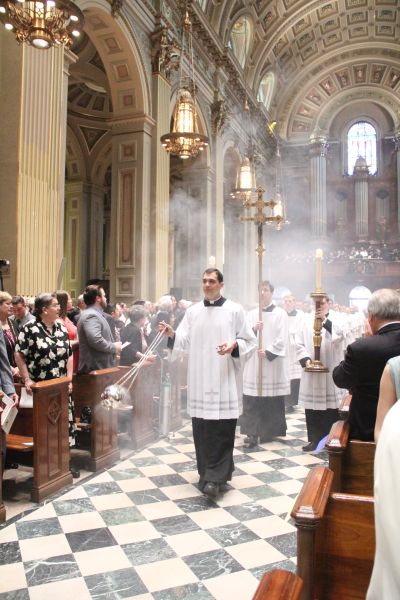 Seminarian Daniel Arechabala leads a procession in the Cathedral Basilica of SS. Peter and Paul in this file photo. (Sarah Webb)

“Well, we’ll have to go ask Father after church,” said Mary Beth Arechabala, Dan’s mother. “It’s just how much attention he was paying to the vessels and the ceremony and the vestments and everything.”

The call continued as a teenager, when Arechabala wrote a letter to God, who called him to the priesthood, but Dan wanted to experience the world.

Arechabala dated intermittently in high school and attended seven proms between his junior and senior year. In and out of relationships, he usually ended them, except for one girl who broke up with him during his senior year. Mary Beth saw him struggling with the call throughout high school.

Several months after the breakup when Arechabala attended Franciscan University of Steubenville, Ohio, he and the girl talked over the phone as friends, as she explained her decision to end the relationship.

When Arechabala applied for college St. Charles Borromeo Seminary in Wynnewood was on his mind, but his parents wanted him to delay a year.

At that point in his life, Dan remembered his parents had misgivings about the seminary. If not a priest, Dan planned on learning a trade, like his father, and raising a family.

His parents, though, were adamant about him going to college. His mother thought he needed better perspective and more life experiences.

After Dan’s relationship during senior year, he didn’t date again.

“It wasn’t until relationships could’ve been more serious when I was a freshman in college that I began to really reflect on what’s the point of any of this,” Arechabala said. “I determined that I was too immature to be dating at that point.”

He made a personal vow not to date for a year in front of the Blessed Sacrament.

“Mom, if I was gonna meet anyone that I wanted to marry, it would’ve happened at Franciscan because there’s such a wonderful, holy group of women there,” Mary Beth recalled her son saying.

Those 12 months turned into eight years. When dating crossed his mind, he took a step back and again affirmed his commitment to become a priest.

And that letter he wrote as a teenager proved somewhat prophetic, encapsulating continued anxiety between living in the world and dying to it. It was a tension he continued to experience while in the seminary. To him this signifies fulfillment, not emptiness.

“For me, it was just kind of always there,” said Arechabala about his call to the priesthood. “I didn’t always know what to do with it. Sometimes I wished it wasn’t there, but I never really saw myself doing anything else.”

PREVIOUS: Three generations share food and faith under one roof

NEXT: ‘Father’ comes home to Philadelphia