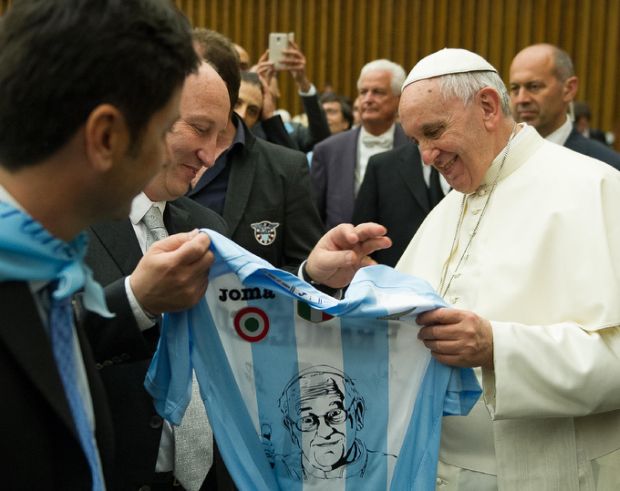 Pope Francis holds a jersey offered to him as a gift after leading a special audience for the Lazio sport association in Paul VI hall at the Vatican May 7. (CNS photo/L'Osservatore Romano)

VATICAN CITY (CNS) — Never let practice and competition get in the way of going to Mass, studying for school, being with friends and helping the poor, Pope Francis told an Italian sports association.

And never let Italy’s infatuation with soccer — like in the pope’s native Argentina — crowd out all the other sports, which are just as important for teaching kids the benefits of teamwork and sacrifice, he said May 7.

In the Vatican’s Paul VI audience hall, the pope met with athletes, coaches, sports fans and team owners that belong to the Lazio Sports Society, which was established in 1900 by young people who wanted an organization that was open to everyone and upheld sports’ ethical and moral values.

Back then, organized sports were geared toward those who had natural athletic talent, the pope said, but the group’s founders wanted people of all abilities and backgrounds to be able to take part.

“I encourage you to continue to be welcoming, to value diverse talents” and offer a way for people to experience friendship and harmony “without discrimination.”

The pope read out a saying by the 4th-century philosopher Sallustius, in Latin, and jokingly remarked how “interesting it would be to ask one of your kids for the translation.”

“Hmm. Better not to,” he remarked. Instead he provided his own translation to the quote “Concordia parvae res crescunt, discordia maximae dilabuntur,” saying it means “With harmony, small things grow; with discord, great things decay.”

He praised the sports association for giving “equal dignity to all sports. In Italy, like in my country, too, in Argentina, there’s the risk of always talking about soccer and neglecting all the other sports.” 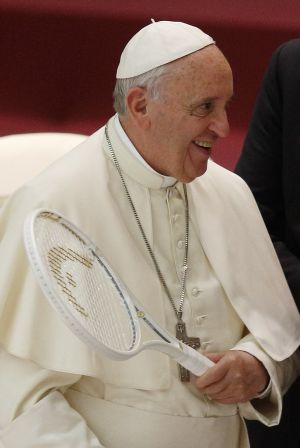 Pope Francis holds a tennis racket he received during an audience with the Italian Tennis Federation in Paul VI hall at the Vatican May 8. (CNS photo/Paul Haring)

Every sport has its worth — not just in physical and social benefits, but also morally in the ways it can offer people, especially kids, a chance to experience a more balanced life, “self-control, sacrifice and loyalty toward others,” he said, especially today when it seems “betrayal” is on the rise.

The Bible teaches that the human person is both body and soul, he said.

“Sometimes it happens that a boy or girl forgets about Mass, catechism because of work-outs and competition. This is not a good sign” because it means they do not have their priorities right, he said.

“Studying, friends, serving the poor” also are important and should not be “neglected in order to do just one thing. No. Everything together,” he said.

The pope met with another large group of athletes, coaches, team owners and family members during an audience with the Italian Tennis Federation May 8.

He urged them to never let the high pressure and high stakes involved in competition lead them to take “shortcuts as happens in the case of doping.”

“How awful and sterile a victory gained by breaking the rules and deceiving others,” he said.

He told them to always do their best and give their all in life by seeking the good “without fear, with courage and with enthusiasm.”

“Spend your life on what really matters and what lasts forever” and put “your talents at the service of bringing people together, friendship and inclusion,” he said.