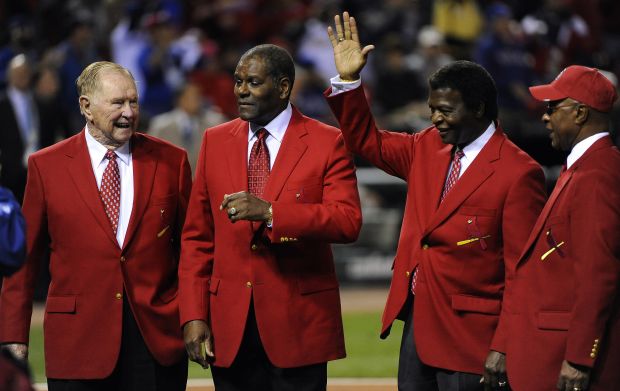 In this 2011 file photo, St. Louis Cardinals Hall of Famer Red Schoendienst, left, stands with other Cardinals legends Bob Gibson, Lou Brock and Ozzie Smith on the field prior to the start of game six of the World Series between the St. Louis Cardinals and the Texas Rangers at Busch Stadium in St. Louis. (CNS photo/Tannen Maury, EPA)

ST. LOUIS (CNS) — Seventy years ago, a ballplayer from a small-town Catholic family began a Hall of Fame career in major league baseball.

Albert “Red” Schoendienst, 92, also is known for quietly living his faith and serving as a mentor and role model for young players.

The St. Louis Cardinals marked the milestone by honoring the player, manager, coach and now team special assistant before an early season game. The team also launched a season-long campaign encouraging fans to demonstrate their affection for Schoendienst by sharing a video message via social media using the hashtag #LoveRed2.

He called the ceremony a terrific gesture, especially having his grandchildren and great-grandchildren on hand. “Baseball’s been so good to me,” he said. “I don’t know how to express myself to thank them for everything that’s happened to me.”

He was a familiar figure in recent years, donning a uniform for pregame practice at home games and routinely hitting fungoes to infielders.

Schoendienst grew up in Germantown, Illinois, not far from St. Louis. A member of St. Anselm Parish in the St. Louis suburb of Creve Coeur, he was “born Catholic and stayed Catholic.”

He spreads the credit around. “I owe a lot to a lot of people for being around as long as I have — people who take care of me, trainers, doctors and everybody else, on and off the field, including my family,” he said.

Schoendienst told of games when he went hitless or when he had a hand in a loss, “and you come home and there’s your little girl or little boy giving you a big hug, and that’ll take the pressure off you. All in all, 70 years … I don’t remember everything, but it was great to be in a World Series, that’s what you go to spring training for.”

He made his debut in left field April 17, 1945, when the Cardinals played the Cubs at Wrigley Field in Chicago. He recalls making an error and hitting a triple.

“Yeah, there’s been a lot of ups and downs and there’s a lot of good things that happened to me” as well as a lot “you wish would have gone the other way, but that’s part of the game,” he said.

Baseball was all Schoendienst knew. He recalled his first game as a professional in the minor leagues in Union City, Tennessee, and thinking that it might be his last because he made two errors at a key point. Cardinals General Manager Branch Rickey was on hand and put him at ease, telling him he was a fine ballplayer — he had four hits in four at-bats — and that he would make many more errors before his career was through.

“He made me feel pretty good. I thought I was going back home, but I stayed and I’m still here,” Schoendienst said.

Schoendienst loves to be around young players, seeing how they react on good days and bad. “I’ve talked to a lot of these younger guys on different things. … You lose a tough ballgame and there’s a lot of pressure put on you. … You try to keep the players in as good a mood as possible.”

Dr. Stan London, who was the Cardinals’ team doctor for 11 years, called Schoendienst “a wonderful person and family man. … Unquestionably he was a mentor to players and managers.”

In his second year in the majors, 1946, Schoendienst moved to second base. St. Louis won the World Series over the Boston Red Sox that season. He played 19 years with the Cardinals, Giants, and Braves, and was a 10-time All-Star.

With Milwaukee, Schoendienst helped the team to consecutive pennants in 1957 and 1958.

Seven times he led or tied for the league lead in fielding percentage. In 1950, he handled 320 consecutive chances without an error, and in 1956 he set a National League record with a .9934 fielding percentage at second base, which stood until 1996.

Schoendienst served as a coach on the 1964 World Championship team and was named manager when Johnny Keane resigned at the end of the season. He led St. Louis to a World Series victory over the Red Sox in 1967 and another National League pennant in 1968, part of a 12-year tenure as manager. He ranks second in franchise history with 1,041 managerial wins.

An illness prevented Schoendienst from attending the Cardinals’ spring training this year. He bounced back and hopes to keep bouncing back for a while.

“I want to be around for one more World Series,” he said. “I hope it’s this year.”