Being Christian is seeking Jesus, not looking for seers, pope says 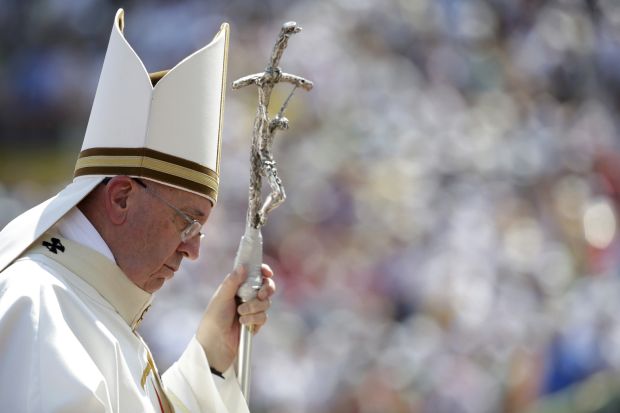 VATICAN CITY (CNS) — Being Christian is looking for, following and imitating Jesus Christ — nothing more, Pope Francis said at his morning Mass.

Being Christian is not looking for those who always have something new to reveal, saying, “‘Where are the seers who will tell us today about the letter that Our Lady will send at four o’clock in the afternoon?’ for example,” he said.

“This is not Christian identity. God’s final word is called ‘Jesus’ and nothing more,” the pope said June 9 during the Mass in the chapel of the Domus Sanctae Marthae.

Christian identity is “beautiful” and concrete, he said, according to Vatican Radio; it is seen in a living witness to Christ, the Beatitudes and the “Judgment of the Nations,” which refers to feeding the hungry, clothing the naked and the other actions mentioned in Matthew 25:31-46.

However, because of human sin, Christians may not be faithful to their identity and may be tempted to weaken or misplace it, the pope said.

The danger of a weakened identity is seen when someone “goes from witness to ideas, watering down witness: ‘Well, sure, I am Christian. Christianity is like so, a beautiful idea. I pray to God,'” the pope said.

The person goes from concrete Gospel commandments to “this religion that’s a bit ‘soft,’ in the air and on the path of the Gnostics,” who emphasized special knowledge over witness.

The danger of losing the proper focus of Christian identity can be seen with “those who always need some novelty” and don’t realize it all begins and ends with Jesus.

They have “forgotten that they have been chosen, anointed,” and have the Holy Spirit, not seers, to guide them.

The pope did not specifically refer to Medjugorje, the site of continuing alleged apparitions. Yet, the pope told reporters June 6 that the Vatican was getting ready to make an announcement concerning an investigation into the claims of six people who have said Mary began appearing to them daily in 1981 and giving them messages.

There is also the risk of being too open to the world and “widening the conscience so much that everything fits in there. ‘Yes, we are Christian, but this is OK …,'” Pope Francis said.

Being too much of the world and too ambiguous is seen in Christians who “cannot and do not know how to give witness to Jesus Christ.”

Jesus “became man and died out of obedience,” the pope said, and “this is identity and there lies witness.”

He asked that people pray for God’s gift of identity and not try to water it down, put it on the wrong track or mold it to the things of the world.

PREVIOUS: If you made mistakes, ‘turn back’ to Jesus, pope urges

NEXT: When we give of ourselves, we enter the Kingdom of God