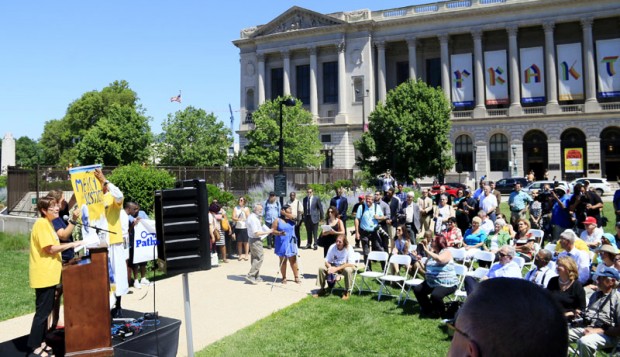 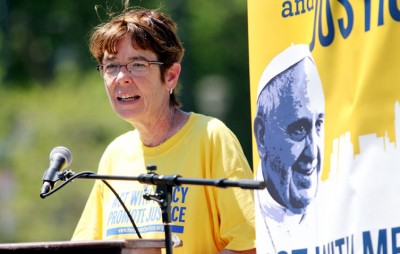 The selection of the Benjamin Franklin Parkway for the June 22 official launch the World Meeting of Families’ Hunger and Homeless Committee’s Francis Fund would seem an obvious choice.

After all, this is Philadelphia’s proudest and most beautiful boulevard, lined with museums, fountains and stately monuments, and it is here Pope Francis is scheduled to celebrate Mass on Sept. 27, before what is expected to be a massive crowd representing Philadelphia, the nation and the world.

There was another reason this spot between Philadelphia’s Central Library and the Shakespeare Memorial was chosen. The area, in addition to its cultural splendors, “is also home to some of our poorest citizens who have no place to go and are often hungry. They live and sleep on this very parkway,” said Sister Mary Scullion, R.S.M., the chair of the Hunger and Homeless Committee and executive director of Project HOME, Philadelphia’s leading charity in work with the homeless.

A main thrust of the WMOF Hunger and Homeless Committee is together with Project HOME the establishment of the Francis Fund, which has a stated goal of raising at least $1.5 million to be distributed to selected organizations that serve the poor and disenfranchised. About $700,000 has already been raised.

It is also promoting a campaign to petition all members of Congress on a bipartisan basis to address issues of poverty and justice.

Because Archbishop Charles Chaput along with officials of the World Meeting of Families and civic leaders was in Rome as part of the preliminary planning for the WMOF and the visit by Pope Francis, a letter from the archbishop was read at the Francis Fund launch by Danielle McNichol of the World Meeting. 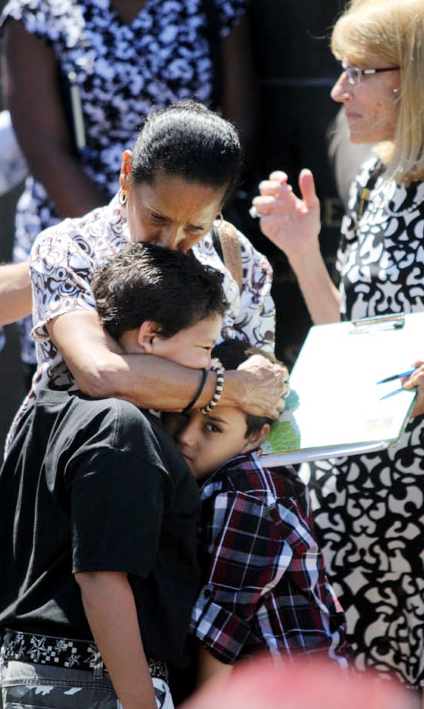 Maria Guzman kisses her grandsons Jesus and Christopher Terreforte at the launch of the Francis Fund. Guzman, a widow who while raising her grandchild was helped by Visitation Community Center in Kensington,
now serves on the Hunger and Homelessness Committee. (Sarah Webb)

“The visit of Pope Francis to Philadelphia this fall is a great opportunity for our entire city,” the letter read in part. “His presence will be deeply informative, not only for the Church but for countless people in our region. His energy, enthusiasm and deep sense of joy and mercy will leave their marks on all of us.

“In particular the Holy Father has made a fervent call for persons of faith, and indeed all people of good will, to care for the poor. He has challenged us to make our love concrete by reaching out in charity and mercy to those who are suffering, and also — in the social sphere — by working for justice. This challenge will be key to his message when he comes to our city and nation.”

The Francis Fund is almost halfway to its goal thanks to founding gifts by the Connelly Foundation and Wells Fargo Bank, and also major gifts given by JBJ Soul Foundation, Janet and John Haas, Lynne and Harold Honickman, Leigh and John Middleton, Brian and Aileen Roberts and Wawa.

Describing the organizations that have been selected to receive grants from the Francis Fund was Emily Riley, executive vice president of the Connelly Foundation.

“All of the groups have a strong commitment not only to service but to upholding the dignity of the persons they serve,” Riley said. “We honestly believe this can be a powerful legacy of the Holy Father’s visit to Philadelphia.”

Greg Redden, regional bank president for Wells Fargo, complimented the organizers for “your compassion and focus in reaching out to the most challenged of our city’s residents” which “inspires all of us to be part of your long-term efforts in promoting economic justice.”

Actually the Francis Fund is not limited to Philadelphia; it extends to the suburbs, especially Chester and also Camden, N.J.

The grants did not specifically target Catholic groups. Also included were Protestant, Jewish, Muslim and secular programs that are devoted to meeting the needs of the poor, starting alphabetically with the Aquinas Center and ending with Women Against Abuse.

Although the fundraising is being done through Project HOME, none of the funds raised will assist Project HOME programs.

As concrete examples of those who will be assisted, testimony was given at the Francis Fund event by people whose lives were changed for the better by community outreach programs.

Alfonso Geiger, who was formerly homeless, was assisted by Project HOME and is now an advocate for the poor. “There are still people out there who need mercy and justice,” he said. “These are not bad people, they just need an opportunity to turn their life around.”

Anne Marie Jones, a survivor of sexual exploitation on the streets of Kensington for more than five years, received the helping hand she needed though Dawn’s Place, which will receive a Francis Fund grant. “I was broken when I got there. Dawn’s Place helped me realize who I am and that I am worth something,” she said. 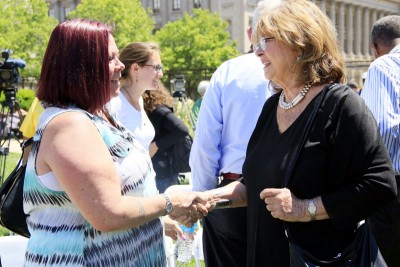 Anne Marie Jones (left) a former resident and advocate for the women’s shelter Dawn’s Place, speaks with Emily Riley of the Connelly Foundation and a member of the Hunger and Homeless Committee, after the press conference June 22. (Sarah Webb)

Maria Guzman was literally living on the streets trying to support a grandchild, and starving herself for his sake when the staff at Visitation Community Center intervened and helped her become self-sufficient. “I believe in God and I believe in angels,” she said. “If it weren’t for groups like the Francis Fund I don’t know where I would be.”

While many of the approximately 50 groups that will receive a grant from the Francis Fund are independent, some come under the banner of the Archdiocese of Philadelphia’s Catholic Social Services, including Casa del Carmen, Family Service Center of Delaware County, Mercy Hospice, St. Francis-St. Joseph-St. Vincent’s Homes and St. John’s Hospice.

“We are fortunate to receive funds from the Francis Fund,” said Joseph Sweeney, secretary for Catholic Human Services. “I feel great about it and it is a testament to Sister Mary. She is an incredible force of nature, and talk about ecumenism, this is it.”

Major donors are, of course, an important part of the Francis Fund, but it really represents an opportunity for everyone to contribute to this very special priority of Pope Francis — the poor.

“In particular, the Holy Father has made a fervent call for persons of faith, and indeed all persons of good will to care for the poor,” Archbishop Chaput said in his message. “He has challenged us to make our love concrete by reaching out in charity and mercy to those suffering, and also — in the social sphere — by working for justice. This challenge will be key when he comes to our city and nation.”

For more information about the Francis Fund and how to contribute, visit www.mercyandjustice.org 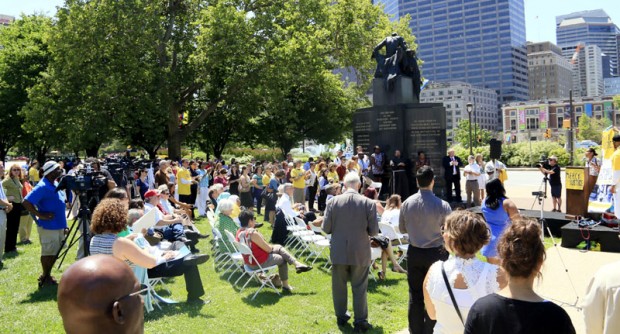 Maria Guzman speaks to the gathering on the parkway where Pope Francis will visit during his trip to Philadelphia in September. (Sarah Webb)

NEXT: Catholic Bible conference focuses on the family