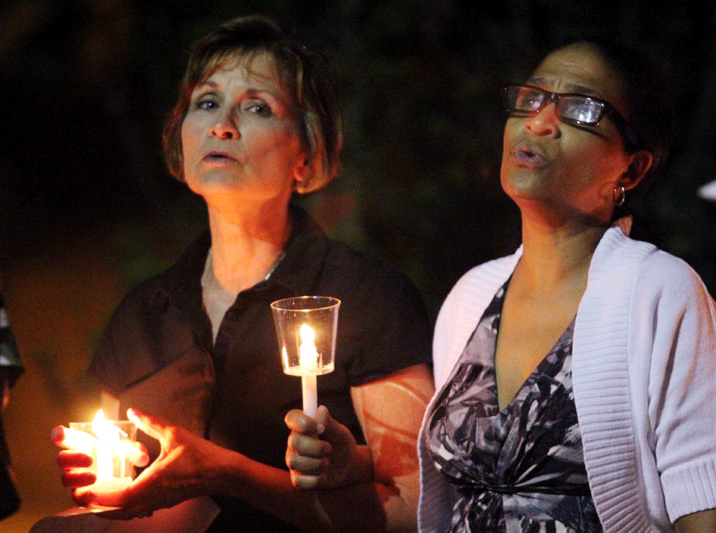 Catholics in the Philadelphia region came together recently to remember the nine people massacred June 17 in a church in Charleston, South Carolina.

The Archdiocese of Philadelphia’s Office for Black Catholics worked with several Catholic parishes to pray in solidarity for the victims, their communities and an end to racial hatred in the United States.

“Faithful throughout the Archdiocese of Philadelphia are invited to pray for the victims and the families of Emanuel AME Church,” said Deacon William Bradley, director of the Office for Black Catholics. “In unity and solidarity with Emanuel AME Church and all affected by senseless acts of violence, the Bible study and prayer gatherings are aimed to promote fellowship, prayer and open dialogue.”

First, a candlelight vigil drew a cross section of the faithful outside St. Raymond of Penafort Church in the Mount Airy section of Philadelphia on Sunday night, June 21. (See our photo gallery of the vigil.)

Then, Bible study sessions were held on the following Wednesday night, June 24, at four Philadelphia parishes to give witness to the right to pray and worship in churches as well as to mark the one-week anniversary of the Charleston shootings.

At Sunday’s vigil Father Christopher M. Walsh, pastor of St. Raymond, listed the three natural reactions that he noticed most people had. They were sadness, righteous anger, and hope. He said it was normal to feel sad for the victims and their families and appropriate “to celebrate them as Christian heroes.”

He acknowledged that anger is a natural response after any trauma. He pointed out that the massacre opened old wounds, especially for those who lived through the more overtly southern segregation. He noted many people are particularly angry because they thought this type of racial animosity was behind them.

Finally, he said there was reason to hope. “The Dylan Roofs, the Ku Klux Klan, and the racist rants on Facebook will not have the last word,” Father Walsh said. “We remember the words of the Rev. Dr. Martin Luther King. We remember his words knowing that it is God’s dream.”

For Eugene and Louise Frasier, members of St. Athanasius Parish, the vigil had special significance. They are natives of Columbia, South Carolina. Eugene grew up in the African Methodist Episcopal Church in Columbia, the sister church of Mother Emanuel AME Church in Charleston. He was a member there until he converted to Catholicism while in high school in 1958.

“My wife and I still have family in South Carolina,” he said. “I not only have ties with the AME church in South Carolina, but I graduated from Allen University where the pastor and the youngest church member who was killed graduated from. I lived through the bigotry and hatred, so I have righteous anger. I am here to get some solace because of the evil of racism.”

Louise Frasier said she has three sisters and 170 nieces and nephews who still live in South Carolina, and she has great concern about the well-being of her younger relatives.

“I am going to see them in about two weeks and we will talk about this with the younger generations of the family,” she said.

St. Raymond’s member Valerie Holmes asked those gathered for personal prayers for her and her family. The daughter of a Tuskegee Airman, she grew up “in the midst of hatred” and the “Civil Rights Movement activism” in Alabama, she said. “The shootings just brought up many old wounds for me so that is why I was asking all to pray for me,” Holmes said.

“I came out to send up prayers for the people that died,” said Pat Kerr, a member of St. Raymond’s. “I am hoping that the lives of their families and those in South Carolina will get better. I am praying that they will all move towards loving each other more.”

Madeline Tymes came to the vigil from Yeadon, Delaware County. “I am hoping that God opens our eyes as we pray. There is much power in prayer and the Scriptures, and we must believe that God is first,” Tymes said.

NEXT: Francis Fund helps the poor and answers pope’s call