Over drinks, young adults get to know their archbishop 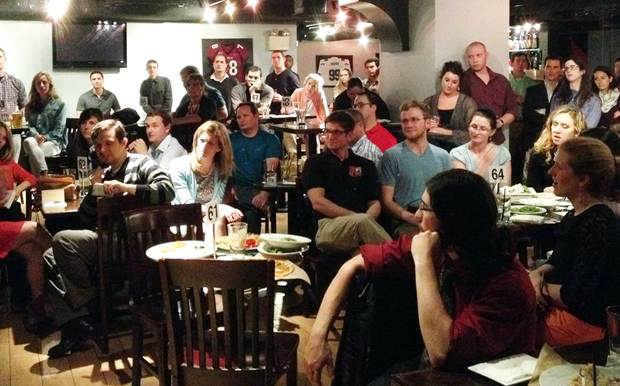 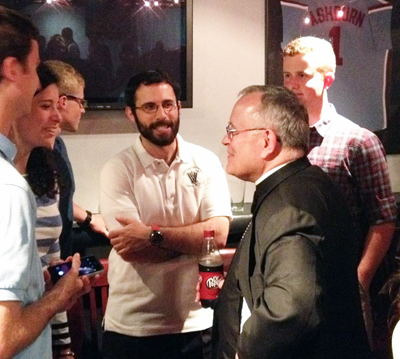 Archbishop Chaput talks with young adults at the “Chat with Chaput” event June 4 at the Field House in Philadelphia. (Facebook)

Beth Riordan’s data suggested Catholic young adults in the Archdiocese of Philadelphia really wanted to know more about their shepherd, Archbishop Charles Chaput, and some of the big issues he’s tackled since his 2011 installation.

So Riordan, who works in young adult ministry in the archdiocesan Office for Catechetical Formation, organized the “Chat with Chaput” event June 4 at the Field House, a bar in center city Philadelphia, for about 100 Catholic young adults.

After a performance of original songs and cover music by Catholic singer/songwriter Teresa Peterson, the archbishop began tackling questions that were submitted prior to the event. One such was the book that had a profound impact on his life.

“I would say the biography of St. Francis of Assisi. His life reflects mine in a certain way,” the archbishop said, encouraging everyone to read biographies of famous people.

“Read about people who are significant to your career. Learn about what that person did and learn how you can be better. It doesn’t have to always be a prolific figure,” he said.

Archbishop Chaput shared his daily prayer schedule which includes waking up at 4 a.m. to pray. Then after coffee and going through his email, he celebrates Mass. During the daytime hours that follow, he reads the Bible and the newspaper and reflects on them.

He also answered a question about his favorite saints. “Saints Augustine and Francis of Assisi are my favorites,” he said. “Augustine was a bishop and that is what I am. Francis of Assisi founded the Franciscan Order and I belong to them. I also admire Saints Charles Borromeo and John Paul the Great.”

One of the hot-button topics he addressed, among others, was about divorce for Catholics. While he reiterated church teaching, he also mentioned his experience with the issue as his own niece has divorced.

“Marriage teaching can be a challenge but it will never change,” he said. “Divorced Catholics must get an annulment and proof of no marriage or be faithful to their spouse; for better or for worse. Marriage is a sacrament and symbol of Christ’s love.”

Another hot topic was gay marriage. Archbishop Chaput urged his listeners to make a stand to defend traditional marriage between one man and one woman. The purpose of marriage “is to procreate and bring in new life for the sake of children,” he said, encouraging people to “give witness to what you believe.”

The young adults in attendance wanted suggestions on what they can do to help the Catholic Church, especially in Philadelphia. The archbishop simply answered, “Be saints.”

Young adults, no matter their career, “must model Christian virtues and do it with charity,” he said, adding they should “form small communities and build fellowship.” He also suggested they bring a fallen-away Catholic or two to church.

Archbishop Chaput was asked to reflect on the last three popes since being bishop in 1995. He came to know all three of them and he highly respected them, especially Pope Benedict XVI who was a great thinker of the Catholic Church.

His first encounter with St. Pope John Paul II was after his ordination as bishop in the 1990s. He also shared a story about meeting Pope Francis in 1995.

“It was at the Synod of the Americas that I met then Archbishop Jorge Bergoglio. I said that he will make a good pope one day, and sure enough it happened.”

Archbishop Chaput reflected on a comparison of Catholics in Philadelphia to those in Denver, which he led as archbishop from 1997 to 2011. What he noticed was Philadelphia was more cultural and older, in more ways than one, than Denver.

The Philadelphia Archdiocese has seen a 30 percent decrease in church attendance despite the larger number of elementary and secondary schools in the archdiocese, according to the archbishop. Meanwhile the comparatively young Denver Archdiocese, with its strong Catholic community, sees more young people attending church even with fewer Catholic schools. Denver had “one Catholic college while Philadelphia had several,” he noted.

Joe Lindsley, a parishioner of St. Francis Xavier Parish in Philadelphia and emcee for the event last Thursday evening, believes the discussion with the archbishop will bring hope to the archdiocese.

“This event is a great way to lead us into the visit of Pope Francis” this Sept. 26-27 after the World Meeting of Families in Philadelphia, Lindsley said. He encouraged his fellow young attendees to reach out to their peers and evangelize them.

PREVIOUS: Young men know where they are going: On vocations retreat

NEXT: Work begins on new senior housing project in Kensington