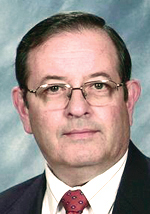 Deacon Clark was a retired police sergeant who had a second career with the Archdiocese of Philadelphia with the Family Life Office and as a theology teacher in the Catholic high schools.

Born in Philadelphia, the son of the late John and Genevieve Clark, he entered the Philadelphia Police force ultimately with the rank of sergeant, counseling police officers as part of the Employee Assistance Program.

“He maintained his faith and did counseling for police officers based on Catholic principles,” said Philadelphia Police Captain Louis Campione, an officer with the League of the Sacred Heart, the organization for Catholic police officers and firefighters.

Deacon Clark was married to his wife, Eleanor (Ellie) Clark, for the past 47 years and the father of three: Father Luke (born Gregory Thomas) Clark, O.P.; John Christopher and Julie Kotsiopoulos.

He entered the diaconate program for the archdiocese, and was ordained as a deacon at the Cathedral Basilica of SS. Peter and Paul by Archbishop Anthony Bevilacqua on May 29, 1988, as the first member of the policed force to be ordained.

His initial assignment was at St. Jerome Parish, Philadelphia. He transferred to St. Joseph Parish in 1997 and ministered there, except for a brief period when he relocated to Florida, until his death.

At St. Joseph’s, Deacon Clark was very active in ministry, preaching weekly, participating in baptisms and wakes and other programs, according to Father Eugene Tully, St. Joseph’s pastor.

In his years with the Catholic schools he taught theology at Archbishop Wood and Archbishop Carroll high schools.

A viewing for Deacon Clark was held May 29 at the Urban Funeral Home, Ambler, and another on Saturday, May 30 at St. Joseph’s Church followed by his funeral Mass celebrated by Father Luke Clark, who was also the homilist.

Deacon Clark is also survived by his grandchildren, Evan and Alex Kotsiopoulos.

NEXT: Franciscan sister, a PhD chemist and teacher, dies at 68