6,000 volunteers ready to lend many hands this September 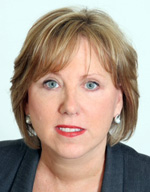 Susan Kinkel, director of volunteers for the World Meeting of Families.

Although Jesus told his disciples, “The harvest is abundant but the laborers are few,” that’s not the case for the World Meeting of Families in Philadelphia, for which more than 6,000 volunteers have signed up since April.

Even before the website to register volunteers was up and running, “we had people jostling at the gate,” said Suzanne Kinkel, director of volunteers for the World Meeting. “Over a thousand had e-mailed our office as far back as October 2014 when I came on board.”

As a part of the online process, applicants are required to undergo a criminal background check that usually clears in 72 hours, though many people have reported a much quicker turnaround. The process is engineered to take fewer than five minutes and seamlessly auto-fills between the World Meeting website and Verified Volunteers, the service that conducts the background check.

“After all,” Kinkel said, “people are volunteering their time. We want to make sure the whole process is as easy as possible, while still being very secure.” Over 30 percent of volunteers have opted to pay for their own background check, which costs the World Meeting $35 per person.

Applicants can register for 103 different events and locations, and can even select one of six more specific roles within their service assignment if so inclined.

Operations volunteers will assist with technical set-up; those signed up for “special services” will assist people with exceptional needs, such as wheelchair access. “Digital diplomats” are assigned to help provide social media coverage throughout events, and language specialists are assigned from among bilingual volunteers, many of whom are Spanish-speakers.

Volunteer captains direct the activities of each particular group. Events are assigned on a first-come, first-served basis, and there is a waiting list for certain events.

Rae-Maria Smith, a parishioner of St. Ignatius of Loyola Parish in West Philadelphia, signed up for what Kinkel described as the most popular activity: guest services, which entails greeting and providing hospitality services to participants at the World Meeting and the papal events. Many will be posted to transportation hubs to welcome attendees to Philadelphia.
“Initially I was waitlisted,” Smith said. “But I’m really looking forward to giving back a little of what I’ve been given — you know, paying it forward,” said Smith, who works as an administrative aide for Philadelphia City Council President and Fifth District Representative Darrell L. Clarke.

“It’s just such a blessing to have the pope visiting Philly,” said Smith. “I still sometimes can’t believe he’s coming.”

Volunteers must register individually because of the background check, but they can opt to be included in a registered group, which Kinkel said many parishes have done. Smaller groups are possible, allowing families to stick together, such as Elaine and Dominick A. Flacco who have signed up to be volunteer captains.

The couple transplanted from South Philadelphia to New Jersey 31 years ago before raising their son Dominick W., who recently graduated from Drexel University.

“I was the initial sign-up and then talked my husband and son into it,” said Elaine. “I’ve been volunteering through the Volunteer Center of South Jersey for some time, and when the pope announced his visit, I knew we had to join up.”

The Flaccos, like many families, selected the same events — in their case, the Festival of Families (Sept. 26) and the Papal Mass (Sept. 27) — in order to stay together and make the commute into Philadelphia a little easier. “We’ll also be staying with family once there,” she said. “My mother is still in the city, so we’ll probably park, stay over and take public transportation from there.”

Most of the volunteers hail from Pennsylvania (analytics for the event were only available by state) and New Jersey. Currently Texas has pulled ahead of New York as the state with the third-highest group of volunteers attending the World Meeting.

Once stationed at their assignments, volunteers will be given specially designed World Meeting 2015 T-shirts and hats to give them visibility and to encourage the event’s Twitter hashtag, #PopeinPhilly.

Volunteer Director Kinkel reflected on what for her is the most exciting thing about the World Meeting of Families.
“Well, of course having Francis in Philly is amazing. But also it’s really exciting to get to work with 10,000 new friends, all of whom are just trying their utmost to make this event come together well,” she said.