Born to privilege, Sister Nirmala rose to leadership via poverty 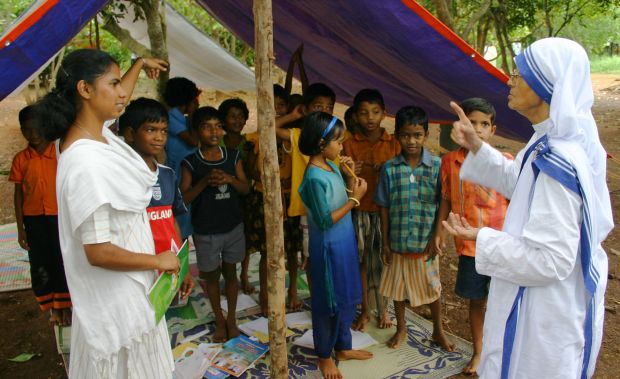 A frequent visitor to Norristown passed away two weeks ago in India. Sister Nirmala Joshi, M.C., who succeeded Mother Teresa as head of the Missionaries of Charity, died in Kolkata. She was 81 years old.

After the anniversary mass, a petite Missionaries of Charity sister came into the sacristy and greeted all the priests. In reality, she resembled Mother Teresa very much in stature and in kindness.

Sister Nirmala’s parents were high-caste Hindu Brahmins from Nepal who had placed their daughter into a Catholic missionary school in the 1940s. Their intention was for her to pick up some English and arithmetic. For that privilege her father, a devout Hindu, was willing to have his daughter participate in Catholic Mass, prayer sessions and Bible study.

What he had not expected was that his daughter would convert to Catholicism and dedicate her life to the vow of “wholehearted and free service to the poorest of the poor.” She took the name “Nirmala” when she became a religious sister which means “purity” in Sanskrit. She had earned a master’s degree in political science and received a doctoral degree in law from the University of Calcutta before entering Mother Teresa’s order.

Sister Nirmala was one of the first sisters to head a foreign mission when sent to Venezuela in 1965 to found the first house outside of India. She later headed other missions in Europe and in Washington, D.C.

Mother Teresa announced, “Now I am happy” upon hearing of her election. In a very humble way Sister Nirmala responded, “Mother Teresa can never be replaced. She is gifted with rare charisma that can never be acquired in one’s lifetime.”

Many doubted that the Missionaries of Charity would survive after Mother Teresa’s death in 1997 but Sister Nirmala proved them wrong. The order grew stronger and is today very active in more than 145 countries. It runs soup kitchens, AIDS hospices, leprosy center, shelters for the homeless, homes for women and orphaned children, etc.

Archbishop Thomas D’Souza of Kolkata, India, described Sister Nirmala as the one who “continued the legacy of Mother Teresa and took it forward.”

Sister Nirmala was given the Padma Vibhushan, India’s second highest civilian award, for her social work in January 2009. As superior general Sister Nirmala was directly involved in the beatification of Mother Teresa, a step toward sainthood in the Catholic Church.

Archbishop Souza characterized Sister Nirmala at her funeral as “one who never talked about herself, she was more about how to support peace, to be helpful to the poor. She had a deep union with Jesus and she was a gentle apostle of peace until the end.”

Sister Nirmala was succeeded by German-born Sister M. Prema Pierick, M.C., on March 25, 2009. When asked about what made Sister Nirmala so exceptional, Mother Teresa merely replied, “She is a Missionary of Charity.”

NEXT: Heading to the beach — with the pope’s encyclical