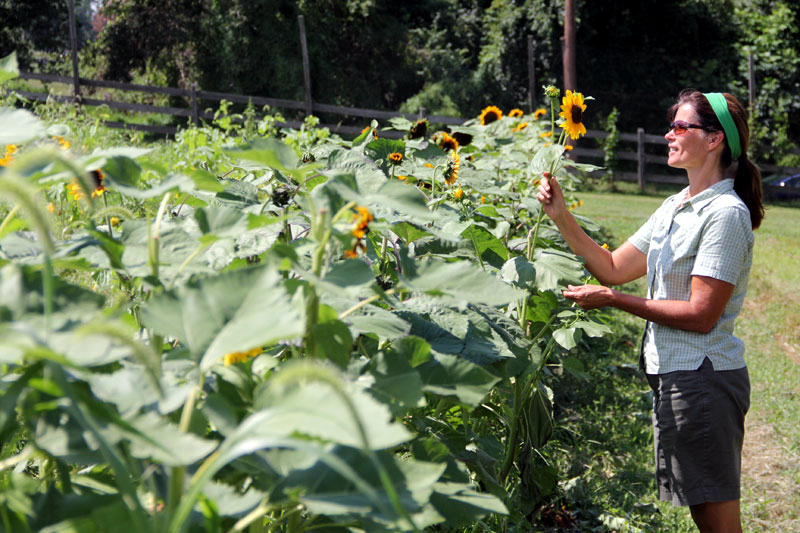 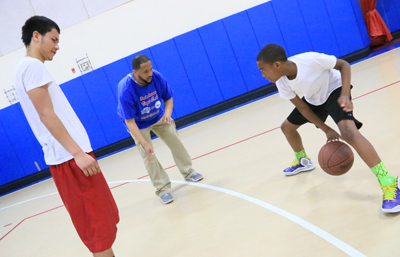 The grant to Visitation Community Center will support the center’s youth programs, such as coaching basketball and other skills to young people. Above, coach Lionel Knight (center) shows Zay Wilson, a sixth grader at Gesu School, how to dribble as Derek Neveres looks on. (Sarah Webb)

The Catholic Foundation of Greater Philadelphia, which addresses Catholic outreach programs throughout the Archdiocese of Philadelphia, has just completed its second fiscal year of operation and is growing nicely.

First announced in September 2013, it replaced the former archdiocesan Office for Development, and it is uniquely different from its predecessor.

First, although archdiocesan programs remain a principal focus, the foundation also assists Catholic programs that are not under the control of the archdiocese.

Second, it is not an advisory board, it is an independent and overwhelmingly lay board — at this time 13 lay men and women who are leaders in their fields and three members of clergy, including Archbishop Charles Chaput.

It operates as an entirely independent 501(c) (3) organization apart from the archdiocese. It is even headquartered across town at 100 N. 20th Street in Philadelphia, not 222 N. 17th Street, site of the Archdiocesan Pastoral Center.

The board chairman for the Catholic Foundation is Richard T. Clark, retired chairman and CEO of pharmaceutical giant Merck. The executive director is Shannon Jordan, formerly with the United States Conference of Catholic Bishops and the former director of development for the Diocese of Trenton.

Staple items for the foundation’s fundraising include, of course, the annual Catholic Charities Appeal and the St. Charles Borromeo Seminary Collection as well as the remains of the Heritage of Faith and Vision of Hope campaign. 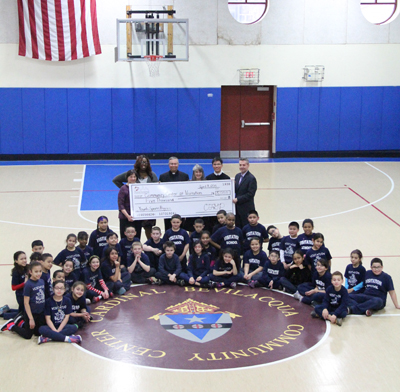 “One of the differences is we have expanded the fundraising,” Jordan said, adding the best way to do this is to “match donors with individual needs.”

In other words, in addition to managing regular appeals, the foundation enables donors to decide just where their donation will be spent. It isn’t just a recipient organization, including the archdiocese, saying, “This is what we want to do, please give us money.”

Some donations may be directed to funds of specific institutions, parishes, or schools operating under the auspices of the archdiocese — for example the St. Gabriel Hall Charitable Fund, the Cardinal Foley Chair Program at St. Charles Seminary, St. Francis de Sales School’s SAILOR (Science and Arts Innovation on the River) Fund and a community impact donation to St. Edmond’s Home for its Summer Program.

CFGP also encourages donors to set up individual trusts that it will manage for them on an ongoing basis. A prime example of this is the Physician’s Charitable Fund, created by Dr. Alexander Vaccaro, president of the Rothman Institute and a founding CFGP Board of Trustees member.

Working through CFPG, the Physicians Charitable Trust recently gave the Little Sisters of the Poor $12,500 toward the purchase of a new heating and cooling system at West Philadelphia’s Holy Family Home, which the sisters run.

“We physicians hope that in the coming year the fund will grow and its impact will be felt by more and more people, such as the Little Sisters of the Poor and Holy Family Home,” Dr. Vaccaro said.

Dr. Mary Laver, a former theology professor, has together with her husband established a family charitable trust through CFGP. She is a member for St. Vincent De Paul Parish in Germantown where social outreach is almost a given.

“My husband is Jewish and I’m Catholic,” she said. “We decided we would like to set up a small family-based fund.” Through CFGP “we were satisfied the fund would be managed well financially and respectful of our values. We liked that approach.”

In her own work, Laver said, “I am especially interested in justice issues as well as charity. I think this is what Pope Francis is inviting us into, as well.” 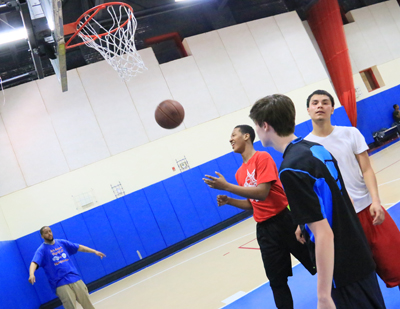 Laver was so taken by what she has seen at CFGP that she offered to work in their grant committee.

“I have come to respect the way the Catholic Foundation invites little-known as well as known organizations in the archdiocese to make their case about their funding needs to be sustainable and live out their Gospel mission,” she said. “It’s getting a match between funders and needs.”

As Laver explained it, many faith-based groups applying for grants may be operating on a shoestring, staffed with volunteers and unfamiliar with the grant process, not really knowing what funders are looking for. At CFGP they will not only tell them yes or no they will advise them on how to write grant proposals, something that will assist them if they apply to other foundations as well.

Typically in the past Catholic institutions and programs that were not run by the archdiocese were on their own in establishing development programs.

Examples of such organizations that have recently received grants or assistance in establishing a development fund through CFGP include the Neumann University Institute for Sport, Spirituality and Character Development, the Community Center at Visitation in Kensington to help reestablish support for its year-round youth sports program; an award of $500 to St. Rose of Lima School in Philadelphia to help pay for text books in the lower grades; a $5,000 grant to Providence Center in North Philadelphia for its youth and adult education programs and a $500 grant to Red Hill Farm, a community supported agricultural initiative established by the Sisters of St. Francis of Philadelphia in Delaware County. 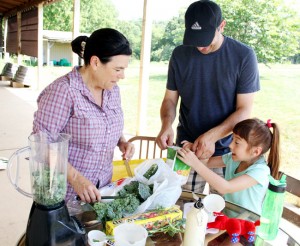 Joanne Rosenbaum, education coordinator, shows Louis Pavone and his daughter Sophia how to make healthy smoothies from things the pick at the farm.

Red Hill Farm, which is its 16th season, grows an abundance of vegetables on a six-acre plot which are distributed weekly to 120 member families between June and mid-November every year. Some of the produce is also given to the sisters for their own use, according to Margaret Lilley, the farm manager.

“Everything is organically grown, and we also grow flowers, which our members can also pick for bouquets,” Lilley said.

Strictly speaking Red Hill Farm is a cooperative – the 120 families all pay an annual fee, and it is not a charity as such and would not be on the radar of most grant providers. However the farm does have a community outreach program, in this case to Drexel-Neumann Academy in Chester, and the CFGP grant will really go toward supporting that effort.

“We work with the third grade and sixth grade classes,” Lilley explained. “Sometimes they come to the farm and sometimes we go to the classrooms. They learn about good nutrition and heathy eating and also cooking. The grant will be used to continue this farm education program.”

For more information on either making a donation or establishing your own fund visit www.catholicfoundationphila.org. 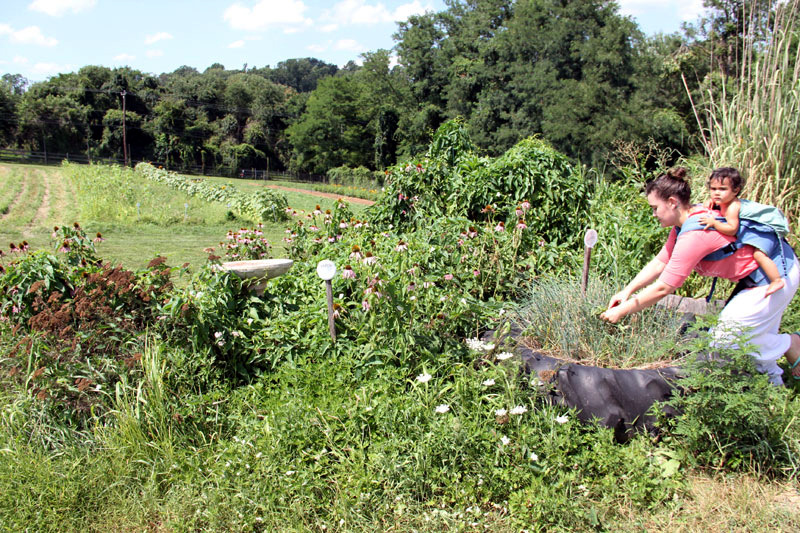 Erin Tanner picks herbs with her daughter Jolene Tanner-Unni on her back.

PREVIOUS: Hundreds rally for life, respect for women in Phila.