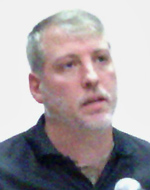 Mark Houck, founder of The King’s Men, a men’s support group, speaks at the Pro-Life Summit July 18 at the Archdiocesan Pastoral Center.

As Philadelphia gears up for the World Meeting of Families in September, the annual Pro-Life Summit last week also took the family as its theme.

The Saturday, July 18 event, which was sponsored by the Archdiocese of Philadelphia’s Office for Life and Family, began with a prayer vigil led by the Pro-Life Union of Greater Philadelphia at a Planned Parenthood clinic at 12th and Locust streets in center city Philadelphia. About 40 pro-lifers from across the region prayed and gave witness to life at the clinic.

Afterward they prayed the rosary before a 9 a.m. Mass a few blocks away at the Cathedral Basilica of SS. Peter and Paul. The rosary included a prayer for families and the singing of “God Bless America.”

Father Kenneth Brabazon, parochial vicar at the cathedral parish, was the main celebrant of the Mass, with Augustinian Father Denis Wilde, in residence at St. Nicholas of Tolentine Parish in Philadelphia, as concelebrant. The Mass was offered for the victims of the West Philadelphia abortion clinic formerly run by Kermit Gosnell.

“We must be take part in the buildup of the culture of life,” said Father Brabazon. “Though there have been many babies and mothers killed by abortion, Christ has won the victory.”

Following the celebration of Mass, everyone gathered at the Archdiocesan Pastoral Center next door to the cathedral for the summit, which included talks and fellowship.

Steven Bozza, director of the archdiocesan Office for Life and Family, described how the summit related to the topic of family.

“With the World Meeting of Families approaching, the topic for the summit will tie in with the family,” he said.

He spoke about the recent U.S. Supreme Court decisions legalizing same-sex marriage and the “disgusting and callous use of human organs” by Planned Parenthood, as shown in recent videos. Bozza advised everyone to “not close your eyes on this issue going forward. The best thing we must do is to be vigilant in the buildup for the culture of life,” he said.

The first topic of the summit was fatherhood, presented by Mark Houck, founder of the local men’s support group The King’s Men.

“Though misunderstood, a man’s role in society is to provide for and protect the family,” Houck said. Due to feminism, “men were disenfranchised,” he said.

The problem for men today is not a lack of priests or good husbands as models, but “a failure to raise good men.” Houck proposed a solution in The King’s Men initiative called “Into the Woods,” which takes participating men to a camping-style retreat set in the mountains where they are surrounded by good men who want to be better.

“The best thing a man can do today is man up and speak up, Houck said. “When a man speaks up, much can change and they are not afraid to stand up for the faith.”

He invited good men to lead by example and to encourage other men to “come and see what they are doing,” he said. “Chances are they might want to pray outside of the abortion facility with you or be active in the parish.”

The second topic of the summit was motherhood, and Marie Raffa Joseph, founder of Legacy of Life, spoke about what it means to be a mother of two children in a complex situation.

Speaking of her firsthand experience with an actively homosexual husband, Joseph said, “Whenever my children go and visit their father, I consecrate the visit to the Immaculate Heart of Mary. Like Mary, who experienced suffering when Jesus was led to death, we too will experience suffering during our lifetime, but Jesus conquered it all on the cross. Teach your children to pray and be there for them because they hold your testimony.”

Joseph reminded her listeners to judge the sin and love the sinner.

A problem facing motherhood, she said, is that it “has been centered more on the physical rather than the spiritual aspect. Spiritual is inside of us. Our job as women is to help men become better fathers and husbands.”

John DiCamillo, an ethicist from the National Catholic Bioethics Center in Overbrook, was the last speaker at the summit and he discussed the wisdom of older people in his talk, “Care for the Elderly.”

He said the rising acceptance of many in society of assisted suicide and euthanasia is sending a message that elderly people are “out of date,” but they are much needed.

Referring to Pope Francis, DiCamillo said the elderly are a witness of the past and a reservoir of wisdom that must be learned by the current generation.