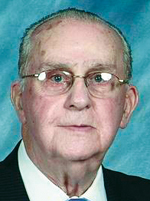 Born in 1927, he was the son of the late James Joseph Burns and Mary McGill Burns. Following service in the U.S. Army in Korea he attended Temple University under the G.I. Bill, earning a Bachelor of Arts degree in psychology in 1952. While at Temple he also joined the ROTC program and subsequently served in the Army Reserve, rising to the rank of captain.

Married to Mary Smith Burns for the past 62 years, he was the father of six children.

“My father was wonderful, a thoughtful man who always thought before he gave advice,” said his eldest son, James. “He was very devoted to the Church. When someone asked my mother what Dad’s hobbies were, she said, ‘basically the Church was his hobby.’”

In his professional life Deacon Burns was in risk management with Rollings Inc., from which he retired in 1990.

He was ordained to the diaconate on June 5, 1994 by Bishop Edward P. Cullen at the Cathedral Basilica of SS. Peter and Paul and assigned to ministry in his home parish, St. Eleanor, where he ministered until his 2003 retirement.

“He was a wonderful man, very involved with RCIA, preaching and Bible study and one of those guys who couldn’t do enough for the Church,” said Permanent Deacon Joseph De Rosa, who was more recently ordained and considered Deacon Burns as a mentor. “He helped everybody in formation and he especially loved the baptisms and would invite me to join with him in them.”

The reception of the body and viewing for Deacon Burns took place at St. Eleanor Church on Friday, July 10, followed by his funeral Mass with Msgr. Michael T. McCulken, parish pastor, as the principal celebrant and homilist.

In addition to his wife Mary and son James, Deacon Burns is survived by his sons Kevin, Shawn and Michael and daughters Sharon and Mary-Meghan; also eight grandchildren and two great-grandchildren.

Interment was at Limerick Garden of Memories.