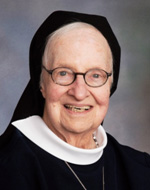 Sister Paul Bernard Blankemeyer, I.H.M., died June 27 in Camilla Hall, Immaculata, in the 71st year of her religious life. She was 95 years old.

Born in Philadelphia, Sister Paul Bernard entered the congregation of the Sisters, Servants of the Immaculate Heart of Mary in 1944 from St. Laurence Parish, Upper Darby, and professed her vows in 1946.

She taught at Villa Maria in Virginia, St. Aloysius Academy in Bryn Mawr and Annunciation B.V.M. School in Philadelphia before her assignment to Camilla Hall in 1979.

NEXT: Deacon who ‘couldn’t do enough for the Church’ dies at 88