Franciscan sister, a teacher and musician, dies at 90 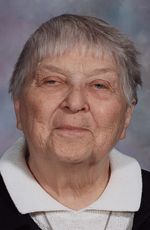 Sister Frances Will, O.S.F. (formerly Sister Emily Leo), 90, died June 20 at Assisi House in Aston. She had been a professed member of the Sisters of St. Francis of Philadelphia for 66 years.

Her funeral Mass was celebrated June 26 at Assisi House.

Sister Frances is survived by her nieces and nephews and by her Franciscan family.

NEXT: Franciscan sister dies at 84, had cared for babies with AIDS