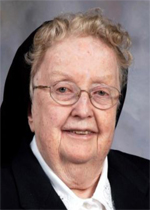 Sister Rosemary Byrne, I.HM., 82, died June 10 at Camilla Hall in Immaculata. She was in the 65th year of her religious life.

Born in Philadelphia, Sister Rosemary entered the Congregation of the Sisters, Servants of the Immaculate Heart of Mary in 1950 from St. Matthew Parish in Philadelphia and professed her vows in 1953.

She taught in the elementary and secondary schools for the Archdiocese of Philadelphia.

Her funeral Mass was celebrated June 16 at Camilla Hall. Msgr. Joseph Logrip was the celebrant, and Msgr. Charles E. McGroarty was the concelebrant.

She was predeceased by her parents Cornelius and Catherine Hughes and her brother, James.

NEXT: Franciscan sister, a teacher and musician, dies at 90