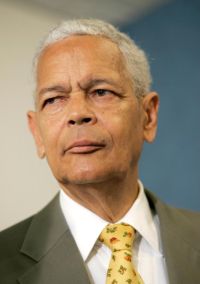 ATLANTA (CNS) — Julian Bond, a leading figure in the civil rights movement and the first African-American in Georgia’s Legislature, died Aug. 16 in a hospital in Walton Beach, Florida, of complications from vascular disease. He was 75.

Born in Nashville, Tennessee, Jan. 15, 1940, Bond moved with his family to Atlanta, where he went to Morehouse College. While at Morehouse, he founded a group called the Committee on Appeal to Human Rights, which desegregated Atlanta’s lunch counters.

The group eventually melded into the Student Nonviolent Coordinating Committee, for which Bond became communications director for six years. That organization pressed the issue of civil rights and voter registration in the Deep South.

Bond won election to the Georgia House of Representatives in 1965 in a new district carved out for blacks, but the House leadership refused to seat him, citing Bond’s support for a Student Nonviolent Coordinating Committee declaring “violation of international law” by U.S. policy in Vietnam and advocating the burning of draft cards. It took a year, but the U.S. Supreme Court ruled Bond’s exclusion from the state House was unconstitutional.

He served eight years in the House, followed by a dozen in the Georgia Senate. Because the Legislature was a part-time job, Bond often augmented his income by public speaking, including remarks at Catholic venues.

At a 1970 talk at Seton Hall University, a Catholic university in South Orange, New Jersey, Bond acknowledged gains among African-Americans, although “some things haven’t changed,” citing an infant mortality rate for blacks twice that of whites, a 30 percent black high school graduation rate and a 40 percent black unemployment rate.

In a 1973 address at the National Black Catholic Convention in New Orleans, Bond said, “The worsening of the black condition coincides almost exactly with the coming of the Nixon administration,” adding, “Government attitudes have changed form a maligned concern to belligerent neglect.”

In a 1973 interview with The Evangelist, newspaper of the Diocese of Albany, New York, Bond said, “Nonviolence is quietly alive” and that it can be “a way of life and a technique,” evident “across the country — picket lines at a grocery store that won’t hire blacks, a march to obtain revenue sharing dollars. But there are no longer the big marches” that marked the civil rights drive of the decade prior.

Speaking in 1979 at a Georgia Interchurch Association meeting on welfare reform, Bond blasted the stereotype of welfare recipients as “21-year-old men who are as strong as anyone, who turn down jobs by the hour, who father a child every nine months and then drive to the welfare office and pick up a huge check in a big Cadillac, cash it at the liquor store, get drunk and wait around until another check comes the next month.”

Bond gave up his Georgia Senate post to run for Congress in 1986 in a race he lost to another veteran of the civil rights era, John Lewis.

Bond’s first marriage, to Alice Clopton, dissolved after 29 years. In 1990, a year after the divorce, he married Pamela Horowitz. He is survived by her and by five children.

PREVIOUS: The great and the small: Film’s tiniest hero has big fun

NEXT: Mary, undoer of the knots we tie in life