Charismatics plan Mass and rally as pope comes to city 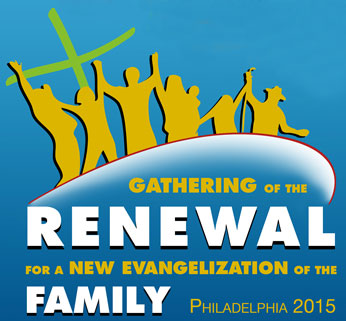 The official logo of the Catholic Charismatic Renewal’s event Sept. 26 at the Wells Fargo Center in South Philadelphia.

One thing for sure, when the World Meeting of Families comes to town at the end of September you may very well come across folks who speak a language you don’t understand.

This could especially happen on Saturday morning, Sept. 26, when one of the groups holding sessions concurrent with the congress will have a Mass and mini-convention at the Wells Fargo Center in South Philadelphia.

That would be the Catholic Charismatics, in which some members through a gift of the Holy Spirit speak in tongues, but not necessarily a tongue anyone else is privy to.

Their event has been in the planning for the past year, according to Gloria Coyne, who is liaison for the Archdiocese of Philadelphia to the Catholic Charismatic Renewal. It’s called “The Gathering of the Renewal for a New Evangelization: The Family is Alive in the Spirit,” and according to Coyne so far 3,000 people have signed up with an expected 5,000 by the time of the event.

The time and date of the rally, from 8 a.m. to 1 p.m. on the 26th, place it at the same time Pope Francis arrives in Philadelphia for his two-day visit.

Speaking on the event’s theme of family, “whatever we do we evangelize, and sometimes we have to do evangelization in our own families,” Coyne said. “We have relationships — spouses, parents, children — and sometimes we are estranged by drugs, pornography alcoholism. We want to recognize the Holy Family as our model and invoke the Blessed Mother, St. Joseph and Jesus to provide healing for our families.”

The cost for the Charismatic Renewal program is $15 per person, but there are discounts for families and young people.

While all of the details of transportation are not fully worked out, Coyne is confident it will be fine in the end.

That’s part of being a Charismatic — place your trust in the Holy Spirit.

PREVIOUS: Maryland group will walk to Philadelphia for papal Mass

NEXT: Prisoners make chair Pope Francis will use in visit