Maryland group will walk to Philadelphia for papal Mass 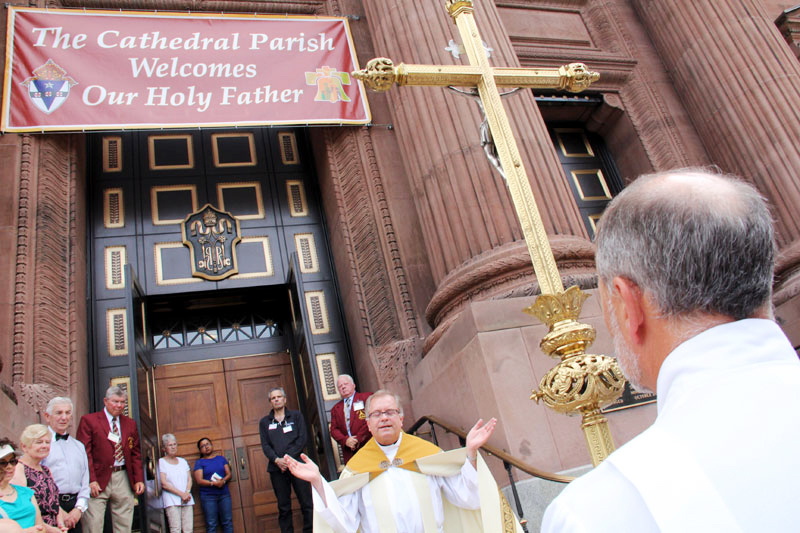 Father Dennis Gill, rector of the Cathedral of SS. Peter and Paul, leads prayers at the unveiling of a large banner welcoming Pope Francis, and the thousands of visitors coming to Philadelphia, Sept. 26-27. (Sarah Webb)

PHILADELPHIA (CNS) — As the Archdiocese of Baltimore and Catholic Review Media finalized preparations in early summer to transport hundreds of pilgrims to the only public Mass Pope Francis will celebrate on his first trip to the U.S., the wheels turned.

Planners thought about the possibility embarking on the ancient concept of pilgrimage, and walk from Baltimore to Philadelphia in September.

Hours after the idea was bounced off Father John J. Lombardi, pastor of St. Peter and St. Patrick parishes in Washington County, Maryland, was on board.

He is a veteran of dozens of such walks, most recently in Ireland, and in 2012 from St. Peter Parish in Hancock to the Basilica of the National Shrine of the Assumption of the Blessed Virgin Mary in Baltimore to promote awareness of the inaugural Fortnight for Freedom.

Father Lombardi and Paul McMullen, managing editor of the Catholic Review, newspaper of the Baltimore Archdiocese, will lead a group of as many as 20 pilgrims, departing from that same Baltimore basilica Sept. 20, through Baltimore City, Baltimore, Harford and Cecil counties, and then into Pennsylvania on the way to the Sept. 27 papal Mass in Philadelphia.

“On one hand, there is the ancient tradition of walking, like the original Camino,” Father Lombardi said, of the Camino de Santiago, the Way of St. James, in France, Spain and Portugal, a portion of which he walked in 2008. “On the other, there is a unique difference, with our fast-paced lives, of getting out of our boxes and walking.

“Remember, our Lord walked to all of his appointments. … That, and we will be heeding Pope Francis’ call to help the poor.”

While few can drop what they are doing and walk 104 miles over the course of a week in what is being called a Pilgrimage of Love and Mercy, named for the upcoming Jubilee Year of Mercy, anyone can join its main outreach, Feet for Francis, a fundraiser being coordinated by Florida-based Funds2Orgs. It partners with nonprofit organizations, collecting unwanted shoes and sending them overseas, where they are needed.

Parishes, schools and Catholic institutions can gather gently worn or new pairs of shoes. Funds2Orgs will supply promotional materials and bags to collect the shoes, and collect them at locations throughout in the Baltimore Archdiocese.

Details were to be posted at www.CatholicReview.org.

Funds2Orgs will ship the shoes to one of its 26 partner nations, among them Haiti, Pakistan and Togo, where they support micro-enterprises which sell the shoes for a profit.

“By repurposing unwanted shoes, people in the Archdiocese of Baltimore will empower those in the developing world,” said Tom Henderson, executive vice president of Funds2Orgs. “This all goes back to teaching a man to fish, as opposed to feeding him one.”

Based on the total weight of the shoes collected in the archdiocese, it will receive a check from Funds2Org. The more shoes collected, the larger the check that will be presented to Baltimore Archbishop William E. Lori in October.

The amount of money contributed will be determined by the weight of the shoes collected.

The pilgrimage itself will require considerable logistical support. The walkers will be accompanied by vans, which will transport pilgrims from each night’s shelter to daily starting points. Participants will spend their overnights at schools, parishes and shelters along the planned route.

“We’ll get tired, face hardships and have to work as a team,” Father Lombardi said. “It will be a mini slice of life.”

NEXT: Charismatics plan Mass and rally as pope comes to city