Knights of Columbus hear of Christian persecution in Middle East 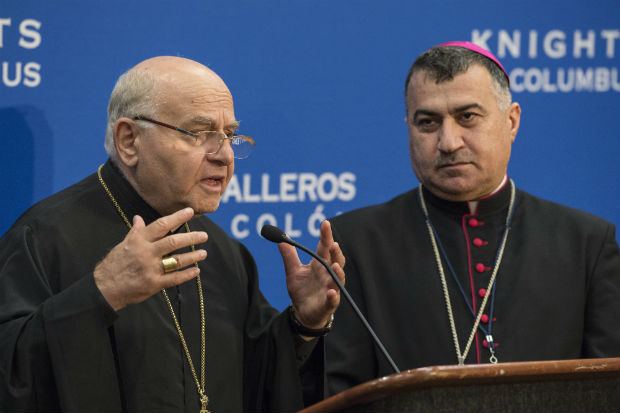 Christianity may be thriving around the world, but it is under severe attack and threatened with extinction in the Middle East, the region of its birth. This was a major theme at the 133rd Supreme Convention of the Knights of Columbus being held Philadelphia Aug. 4-6.

It was stressed at a Sept. 4 news conference with Supreme Knight Carl A. Anderson and two Catholic archbishops of Eastern Catholic Churches with direct experience of the situation. They were Melkite Archbishop Jean-Clement Jeanbart of Aleppo, Syria and Chaldean Archbishop Bashir Matti Warda of Erbil, Iraq. The two archbishops also spoke at a general meeting of the convention.

Anderson quoted figures that said 80 percent of the religious persecution in the world is directed at Christians and a terrible microcosm of this is the persecutions in Syria and Iraq.

Because in many cases it is internal displacement within the country the people have not been designated as refugees and little has been done to help them.

Anderson called to mind another Knights of Columbus Convention in 1926, also in Philadelphia, when then-Supreme Knight James Flaherty announced that the Knights would take up the cause of Catholics in Mexico who were being persecuted during the presidency of Plutarco Calles.

Of the 25 Mexican martyrs of that era who have since been officially canonized saints for their defense of the faith, six were members of the Knights of Columbus.

“Today we are compelled to speak up for our brothers and sisters in the Middle East,” Anderson said. “Pope Francis has called the conditions under which Christian refugees live there intolerable. He has said the situation calls for our prayers and concrete actions to help.”

The section of the congratulatory letter written on behalf of Pope Francis by Vatican Secretary of State Pietro Parolin to Anderson and the convention-goers that pertains to the Middle East situation reads as follows: “His Holiness is profoundly grateful for the efforts of the Knights to raise public attention to this grave humanitarian tragedy. He is likewise grateful for the practical solidarity shown to suffering individuals and families through the Christian Refugee Relief Fund. He appeals once more to your Order for constant prayer, in families, parishes and local Councils for these, our beleaguered brothers and sisters, who strive only to be faithful to Christ.”

To date, Anderson said, the Knights have given $3 million toward humanitarian assistance toward Christian and other minorities for relief in the Middle East and as Pope Francis cited in his letter, it recently established a Christian Refugee Relief Fund which invites K. of C. members and others to support it.

The Knights have pledged an initial $1 million to the fund. All costs for operation will be covered by the Knights of Columbus with 100 percent of donations applied to relief. To assist those who wish to donate, the website www.christiansatrisk.com has been developed.

In his remarks Archbishop Jeanbart placed the blame for the current persecution squarely on the wars in the region. “There was no persecution before the war,” he said. He suggested the backing of revolutionary regimes “is giving money and weapons to the people who are slaughtering us and raping our women.”

For the Knights, he said, “Your concern has made a big difference for me,” and urged them to “do what you can to help us communicate the reality.”

Archbishop Warda, speaking of the situation in Iraq, where many Christians have fled, said, “You have given us help to stay there, to help the people living in tents, in schools and hospitals and churches. Today, thank God we are able to help these families.”