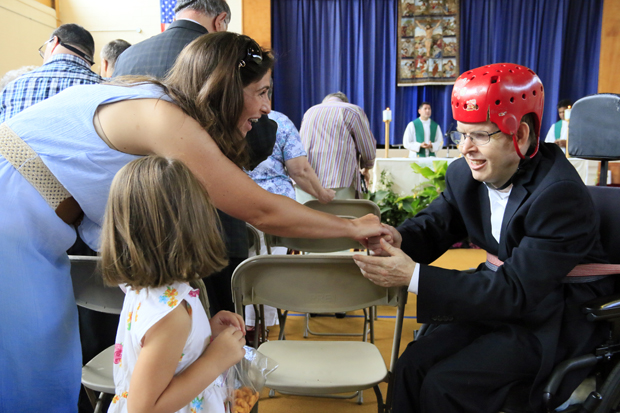 A Don Guanella resident, right, exchanges the sign of peace with a participant in the July 26 Mass at the Cardinal Krol Center in Springfield. It was the final event at the archdiocesan facility for 120 intellectually disabled men before they move into small, cottage-style housing in the fall. (Sarah Webb) 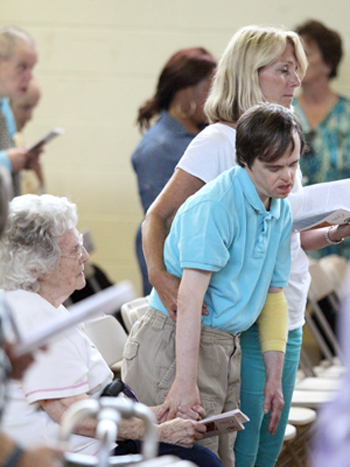 A family prays during the Mass at Cardinal Krol Center. (Sarah Webb)

As Don Guanella Village (DGV) prepares for the departure of its final group of residents from the campus many have called home for years or in some cases decades, a Mass of Thanksgiving was celebrated Sunday, July 26 in the Cardinal Krol Center Gym. (See a photo gallery.)

The event, which included an outdoor social after the Mass, was the culmination of a planned two-year relocation of 120 men intellectual disabilities to a dozen new group homes in Chester and Delaware Counties and Philadelphia, where the men will continue to be served and supported in the spirit of Don Guanella.

The Mass marked 55 years of faith-based service for such persons on the campus, rendered by Servants of Charity priests, Daughters of St. Mary of Providence sisters — both orders were founded by St. Louis Guanella, who was canonized in 2011 — and a multitude of lay staff members and volunteers.

More than 250 current and former residents along with family, friends and staff members past and present attended the Mass that also commemorated the 100th anniversary of the saint’s death.

As the first group of resident students neared graduation, a Parents’ Guild was established to assist the Archdiocese of Philadelphia in raising funds for a new facility to foster lifelong education, growth and development for their adult children. On Oct. 3, 1976 the first 30 young men moved into the new “CK Center,” which was eventually renamed the Cardinal Krol Center after the death of John Cardinal Krol in honor of his essential contribution to its existence while archbishop of Philadelphia.

Father Dennis Weber, SdC., has been associated with the work of Don Guanella Village for over two and a half decades, so it was fitting that he presided at the final Mass on July 26. He gave thanks for Cardinal John O’Hara, another former archbishop of Philadelphia, having called the Servants of Charity from Italy to open Don Guanella School in 1960. 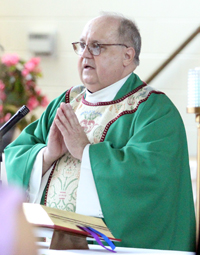 Servant of Charity Father Dennis Weber celebrates the final Mass at Cardinal Krol Center, the facility where he has served as chaplain for more than 20 years. (Sarah Webb)

Father Weber thanked the pioneering priests and sisters and all the families who, he said, “entrusted their sons and brothers to us, and who with them became integral members of a Don Guanella family that continues to support us in a multitude of ways.”

He also recognized the contribution of the many priests, brothers, sisters and lay staff, as well as volunteers, supporters and benefactors “whose love, care and commitment provided a fullness of life” to the residents.

Feeling the emotion of the moment, Father Weber mentioned “our profound gratitude for the blessing of those men we have served, accompanied, and prayed with over these 55 years, our ‘treasures’ and ‘good children’ in the words of Don Guanella, who touched our lives in countless and unforgettable ways.”

Patti Menszak, administrator of Don Guanella Village, noted that with the closing of “this campus steeped in rich and lasting memories, we are left with the core values and profound experiences with which we carry on the mission started here over a half century ago.”

Patricia Kenney called the Mass bittersweet. But on behalf of her family of whom Don Guanella resident Bert is s a member, she expressed “our gratitude and sincere appreciation to each and every person at Don Guanella who has been a part of Bert’s care as he resided in Rome House for 27 years, and now in his new residence,” a community group home in Downingtown.

Rita Marie Ritrovato said her family “has only been a part of the DGV family since February 2010 (but) we have definitely felt the strong sense of community among the residents, staff and family members.  Most importantly, reassuringly and genuinely heartwarming was when Ian called his new residence ’home’ — we couldn’t ask for anything more!”

Rich Leimbach said he anticipated the event “would lean more to the sad and somber.” He was “pleasantly surprised by how warm and cheerful the day was.”

Leimbach said the event was evidence that “this wasn’t an ending to anything, but merely the latest transition for the Don Guanella and Cardinal Krol (Center) families.”

While the campus of Don Guanella Village will close soon, the spirit and care that have been its hallmark will live on in newly established community group homes that comprise the Communities of Don Guanella, with Menszak staying on as administrator.

In addition to nine group homes already open and a cottage at Divine Providence Village occupied by 75 former DGV residents, another three group homes serving a total of 16 men will be opened in the coming months, and a new “mini-campus” is currently under construction on a tract of land adjacent to the former DGV campus and nearby Cardinal O’Hara High School.

The campus will open this fall with a blessing ceremony scheduled for Oct. 23. 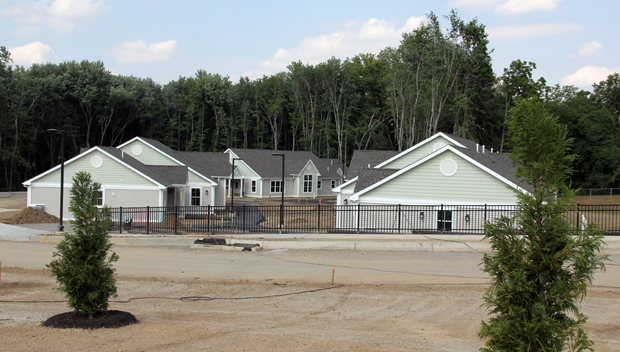 NEXT: Knights of Columbus hear of Christian persecution in Middle East