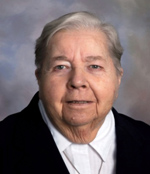 Born in Philadelphia, Sister Emily entered the Congregation of the Sisters, Servants of the Immaculate Heart of Mary in 1947 from St. Bartholomew Parish in Philadelphia and professed her vows in 1950.

She taught in elementary and secondary schools in the Archdiocese of Philadelphia and the Dioceses of Allentown and Harrisburg. Sister Emily was a noted math teacher in many secondary schools for more than 30 years.

Her funeral Mass was celebrated July 22 at Camilla Hall with Father William E. Dean as celebrant and homilist, and Oblate Father Thomas P. Gallagher and Msgr. Joseph Logrip as concelebrants.

Sister Emily is survived by members of her I.H.M. community and her brother-in-law Bud (Anne) Sommers and sister-in-law Helen (Joseph) Wright; she is also survived by many nieces and nephews, grandnieces and grandnephews.