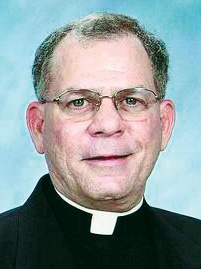 Father Stephen C. White, 62, who served in a number of Philadelphia parishes before retiring for reasons of health, died Aug. 5.

He was ordained May 17, 1986 by Cardinal John Krol at the Cathedral Basilica of SS. Peter and Paul, and his initial assignment was as parochial vicar at St. Bernard Parish, Philadelphia. This was followed by assignments at St. Andrew, Drexel Hill and Holy Innocents, Christ the King, Immaculate Heart of Mary and St. Anne, all in Philadelphia.

He also served as chaplain at St. Hubert Catholic High School for Girls and on the staff of the archdiocesan Office for Legal Services.

“I knew him through his family growing up,” said Deacon Alvin Clay. “He was very intelligent and was conservative, both in his world view and theologically. He was likeable but would never back off from an argument, but he wasn’t mean-spirited. He was very serious about the sacraments.”

Father Robert Feeney, one of his seminary classmates, recalls Father White as “absolutely brilliant.” In retirement he would often help at parishes on Sunday, including Father Feeney’s, Our Lady of Peace in Milmont Park. “He loved Trivia Pursuit and older music, and sometimes would weave the old songs into his homily,” Father Feeney said.

Interment was at St. Peter and Paul Cemetery, Springfield.