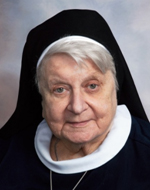 Sister Mary Appolonia Matijasic, I.H.M.,  died Aug. 9 in Camilla Hall, Immaculata,  in the 76th year of her religious life.  She was 93 years old.

Born in Steelton, Pa., Sister Mary entered the Congregation of the Sisters, Servants of the Immaculate Heart of Mary in 1939 from St. Peter Parish, Steelton, and professed her vows in 1942.

Sister Mary taught in elementary and secondary schools in the Archdiocese of Philadelphia and the Diocese of Allentown.  She also taught in Santiago, Chile.

After studying in Madrid, Spain and receiving a Doctor of Philosophy in Romance Languages from Case Western Reserve University, she was assigned to Immaculata University. In addition to nearly 40 years at Immaculata, she also taught Spanish at St. Charles Seminary, Overbrook.  In 2004 she retired to Camilla Hall.

The funeral was celebrated in Camilla Hall on Thursday, Aug. 13. Father Gerald Dennis Gill was the celebrant and homilist.

Sister Mary is survived by members of her I.H.M. community and by her sister-in-law Patricia (Joseph) Matijasic, many loving nieces, nephews, grandnieces, and grand-nephews. She was predeceased  by her parents Stevan and Margaret SpilakMatijasic, her brother Joseph and her sisters Mary (James) Krovich, Anna (Victor) Kowachek, Theresa (Anthony) Sukle and Elizabeth (John) Strangarity.