Families in the city face unique hurdles to holiness

When Rev. Terrence D. Griffith speaks on issues facing urban families at the World Meeting of Families, his words will come from the conviction of sheer experience.

Rev. Griffith comes to the World Meeting with a wealth of experience outside of the Catholic Church. As a renowned Baptist pastor in Philadelphia, he has historically worked to condemn violence in urban areas, particularly when such violence occurs in the context of race and poverty.

During the installation of his second term as president of the Black Clergy of Philadelphia and Vicinity in 2013, Rev. Griffith spoke of the importance of family responsibility in ending violence in urban communities. In his remarks, he said the root of violence does not stem simply from being poor or being black, or coming from a single-parent household. 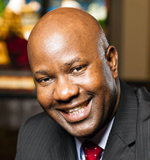 “I grew up poor, and so did lots of successful black men,” he said at the time. “My mom was a single mom and lots of folks grew up in single-parent homes and raised their kids to be successful.”

He also mentioned the duty of churches to keep kids on the right path, as well as the role of family values in the fight against urban violence.

In addition to his leadership role with the clergy, Rev. Griffith is also the author of eight books, and has guest lectured at several colleges in the Philadelphia area. He has also served on boards of several religious and community organizations.

His breakout session on the morning of the first full day of the World Meeting’s adult congress likely will promote discussion of the issues of justice and family life in the inner city.

Another presenter in the Wednesday breakout sessions who hopes to inspire conversation is Terry Polakovic, speaking about the role of women in the Church.

A self-proclaimed feminist, Polakovic is president and co-founder of ENDOW (Educating on the Nature and Dignity of Women) in Denver. She advocates for recognition of “feminine genius,” a phrase coined by St. John Paul II in his 1995 Letter to Women, in promoting equality of and dignity for women nationally and worldwide.

Polakovic and a few of her friends began forming groups for discussion on the role of women, and founded Endow, which is “an educational apostolate that writes study guides for small groups of women that makes the rich wisdom of the Church accessible to the ‘woman in the pew,’” according to the Endow website.

Polakovic is inspired by the teachings of St. John Paul II’s letter to continue spreading this message — that women are valued and respected worldwide, both inside and outside of the Church, and should be recognized as such.

Her session will be structured as a “refreshing and relevant mini-retreat,” in which attendees are invited to reflect on the life of St. Edith Stein, a Carmelite nun who was murdered by the Nazis at the Auschwitz concentration camp.

All the presentations for the Wednesday morning sessions (11:45 a.m. to 12:45 p.m.) are in English except where noted (some with translations), and they include:

Christian and Christine Meert: “Saintly Couples: Models on the Road to Sanctity”

Deacon Harold Burke-Sivers: “Mary of Nazareth: First Disciple and Mother of the Redeemer”

Dr. John S. Grabowski: “The Other Side of Mount Sinai: Growing in Virtue”

Dr. Yves Semen: “Can Society Exist Without the Family?” (in French)

Rev. Terrence D. Griffith: “In the City: Concerns of the Urban Family”

Archbishop Socrates B. Villegas: “One Ring to Rule Them All: The Covenant of Marriage”

Brian Barcaro, Danielle Bean and Robyn Lee: “Where Is This Relationship Going? Dating as Discernment”

Dr. Gregory and Lisa Popcak: “See How They Love One Another: The Family and the Faith” (with American Sign Language simultaneously interpreted)

Teresa Stanton Collett: “Digging Into Dignity: Promoting the Dignity of the Human Person”

Terry Polakovic: “The Special Place of Women in the Family, the Church, and the World”

Father Jean-Baptiste Edart, Jorge Mario Quiceno Nieto, Duber Astrid Zabala Vera and Mary Elizabeth Sperry: “The Bible: A Book for the Family, a Light for the World” (in a mixture of English and Spanish with simultaneous interpretation into Spanish)

PREVIOUS: Let the children come to their own track of the World Meeting

NEXT: Cardinal Peter Turkson to speak here on environment