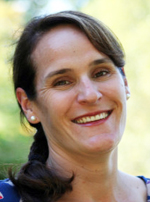 There is something essential for a couple to consider when beginning a romance: integrity and respect for each other’s sexuality.

Erika Bachiochi will discuss this integral component of relationships and more in her Thursday morning breakout session (Sept. 24, 11:45 a.m. to 12:45 p.m.) at the World Meeting of Families, “No Strings Attached? Responding to the ‘Hook-Up’ Culture.”

In our current culture, casual sex seems rampant and lacks respect for a person beyond his or her body. Bachiochi will discuss this cycle of purely physical encounters and how it affects each person.

Particularly among young people, multiple sexual encounters or “hook-ups” can lead to questioning the worth of one’s sexuality and creating a vacuum in relationships. In her session, Bachiochi will present how expressions of sexuality can be more fulfilling than one-night stands, and how navigating through the allures of the hook-up culture can lead to a more satisfying love.

An independent scholar and researcher, Bachiochi focuses on Catholic sexual and social teaching and American constitutional law. She is known for her book “Women, Sex and the Church: A Case for Catholic Teaching,” in which she discusses the merits of Catholic teaching in comparison with secular ideas.

Bachiochi has written for CNN and for several academic journals, including Christian Bioethics (Oxford University) and Harvard Journal of Law & Public Policy. She also is an anti-abortion advocate, and has written extensively upon the “dual realization that abortion both harms women’s well-being and that it is antithetical to a genuine feminism — one that recognizes and celebrates the uniqueness of women as women,” as she wrote in a 2009 article for Crisis magazine.

Bachiochi’s research on how fewer hook-ups can lead to longer-lasting love is evidence enough in another breakout session Thursday morning: “Loving through the Generations: Grandparents and Great-Grandparents.” In it, three grandparents — Catherine Wiley, Phillip Butcher and Michael La Corte — will discuss the importance of inter-generational love and familial support. They especially will touch on how the role of grandparents in a family reflects God’s love for everyone.

Each speaker has significant experience in the topic — not only as parents and grandparents themselves, but also in academic and religious contexts.

Wiley founded the Catholic Grandparents Association (CGA) in 2002, which seeks “to help grandparents pass on the faith and keep prayer in the heart of family life,” particularly through pilgrimages and other organized activities, according to the group’s literature.

Wiley is also a counselor, has done humanitarian work in Romania and Cambodia, and published books on the subject of Catholic grandparenting. She has also given testimony on the role of grandparents to Pope Francis at the Vatican in September 2014.

Butcher is director of international outreach for the Catholic Grandparents Association, a program that seeks to expand the importance of Catholic grandparenthood, particularly in organizing grandparents’ pilgrimages to Catholic sites around the world.

For the past 10 years, he has worked in marriage and family ministry at both the diocesan and the national level in the United Kingdom through the episcopal conferences of England, Wales and Ireland, and has also spoken on the subject at a conference in Rome.

La Corte is the U.S. director of the Catholic Grandparents Association, having served for eight years as the executive director of the World Apostolate of Fatima, dedicated to spreading the message of Our Lady of Fatima. He has spoken extensively on religious topics worldwide, including in Russia, Rome and Portugal.

He also created a six-hour live show on EWTN’s television network, which featured Muslims, Christians and others praying simultaneously according to their faith.

These breakout sessions of the World Meeting, and others, aim to contribute to a greater understanding of how sexuality and committed, respect-filled love can promote Christian values in today’s families.

All the presentations for the Thursday morning sessions (11:45 a.m. to 12:45 p.m.) are in English except where noted (some with translations), and they include:

Dr. Scott Hahn: “Back to the Garden of Eden: Unearthing God’s Covenant with Humankind” (in English with American Sign Language simultaneously interpreted)

Erika Bachiochi: “No Strings Attached? Responding to the ‘Hook-up’ Culture”

Dr. Janet Smith: “Ahead of Its Time: The Prophetic Character of Humanae Vitae”

Lucia Baez Luzondo: “Free to be Faithful? Religious Freedom and the Family”

Dr. Andrew W. Lichtenwalner: “The Holy Family and the Holiness of the Family”

Cardinal Gerald Cyrien Lacroix: “A Celebration of the Kingdom: Married and Celibate Love” (in French)

Sister Sara Butler, M.S.B.T.: “The Complementarity of the Sexes: an Obstacle or a Gift?”

Msgr. Livio Melina: “Father, Forgive Me … Family Forgive Me: The Family and the Sacrament of Reconciliation” (in Italian)