The shadow of Peter fell on America last week 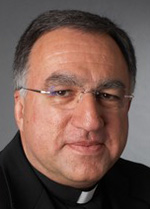 As a student, teacher and university lecturer in the New Testament, I have always been moved by a story told in the Acts of the Apostles (5:15) where we read that the image of the shadow of Peter passing over the sick and disabled who had gathered in Solomon’s portico of Jerusalem’s Temple were healed. The passage speaks of the Spirit-filled apostles who were doing many signs and wonders among the people. The leader in this exciting work was none other than Peter, once so afraid that he even denied knowing Christ. But now, people “carried out the sick into the streets, and laid them on beds and pallets, so that as Peter came by at least his shadow might fall on some of them.”

In reality, it was not Peter’s shadow but God’s power working through Peter. We also learn from that New Testament Acts story that religious authorities witnessing Jesus’ power at work in Peter became jealous of that power and authority, and viewed the apostles as a continued threat and demanded respect for themselves. We know that the apostles weren’t demanding respect for themselves. Their goal was to bring respect and reverence to God. The apostles had acquired the respect of the people, not because they demanded it, but because they deserved it.

An ancient Latin expression, first used by St. Ambrose in the fourth century, came to my mind over the last two weeks as I had the privilege of commentating on Francis’ historic papal visit to Cuba and the U.S.A.: Ubi Petrus ibi ecclesia, which translated means: Wherever Peter is, there is the Church. Peter was in Cuba and the United States over the past two weeks, and his gentle smile and obvious humanity and serenity ignited two nations that had previously been at enmity with one another.

Peter (a.k.a. Francis) ignited a roaring blaze and filled the Cuban Church, the American Church and the universal Church with hope in the midst of cynicism, despair and many who would like to hasten death for a church that is alive and young. Only time, reflection, prayer and decisive action will reveal whether Francis’ tour de force will bear fruit for Cuba, America and the world.

One thing is certain in my mind: the shadow of Peter fell on millions of people in Cuba and America in September 2015 and continues to fall on millions around the world to this day, especially upon those who are wounded and hurting from poverty, injustice, homelessness, hunger, religious persecution and the evil actions of sexual abuse of children. In Pope Francis, the Bishop of Rome, Peter is still among us.

Pope Francis’ first trip to the United States had many people concerned about the impact this elderly, Argentine pontiff would have on a rather beleaguered church in a very divided land: divided by political, social and religious, tribal lines. Many asked if Francis would be able to “connect” with people given that he had never set foot on American soil. After all, Francis arrived in America at age 78 while John Paul was a mere 59 when he visited for the first time in 1979.

Francis did more than connect. He bonded. He moved multitudes. He showed remarkable courage, wisdom and compassion, humanity and normalcy. He proved that he knew much more about us than we know about ourselves. He invited America once again to embrace a consistent ethic of life, from womb to tomb, and he asked us to rethink our stance on the death penalty and the silent death penalty of life imprisonment without any chance of rehabilitation or a new beginning.

Up until last week many people both within and outside the church in North America simply didn’t know Jorge Mario Bergoglio, and some didn’t want to know him. Some knew him through the distorted images of so called “magisterially faithful,” traditional, blogs and websites that do nothing but selectively choose and distort his words without reading his texts in depth.  Others had him all figured him out through the impoverished North American lenses of political categories which do nothing but pigeonhole people and silence them. They knew only half truths about a man wrongly labeled as a “leftist,” “socialist,” “revolutionary,” “non-intellectual,” “country pastor,” etc. etc. etc.

Then the Pope came to America.

The visit included a royal White House welcome, a magnificent, historic address to a special session of the United States Congress, the opening address to the General Assembly of the United Nations and many more stops along the way. There was the profound, heart-wrenching visit to Ground Zero in New York City where the sound of the flowing cascades of water in the striking memorial to September 11 was only rivaled by rivers of tears flowing from the eyes of millions of people who watched that ceremony.

With the backdrop of Independence Hall, the Argentine Pope who knew first-hand about dirty wars, injustice and religious persecution reminded us of our own story of freedom and called us to work hard for religious liberty in our own land and in every land. When he had the pilot fly low over the Statute of Liberty in New York’s harbor, we can only imagine what was going through his mind. Emma Lazarus’ words engraved at the foot of the statue: “Give me your tired, your poor, your huddled masses yearning to be free…” resounded in Francis’ own plea to the American people and the American Church as he invited us to open again our hearts and homes to so many displaced persons wandering across the face of the earth.

There were parades, cheers, throngs of people, Masses, prayers and praise rightly heaped upon women religious of the United States of America. The media did not miss the deep significance of the Holy Father’s private, moving meeting with victims of sex abuse at St. Charles Seminary in Philadelphia, a city and a church that bear the scars of the abuse scandal and long for healing and reconciliation. Francis reminded us that love is always having to say we are deeply sorry for what happened. He let people know he listened and understood and he will continue to act so such a disaster would never repeat itself. Justice will be done.

The grandfatherly pope delivered one of the best, unscripted teachings on marriage and family life before nearly a million people on Benjamin Franklin Parkway in Philadelphia while millions more watched on television. His talk at the World Meeting of Families evoked deeply in my mind and heart the words of his saintly predecessor John Paul II: “The future of humanity passes through the family.”

The New Testament’s Acts of the Apostles tells us “that they even carried the sick out into the streets and laid them on cots and pallets, so that when Peter came by at least his shadow might fall on any one of them.” Francis reached out as a gentle, grandfatherly shepherd and blessed disabled, suffering, homeless, hungry and incarcerated people along the way while their loved ones, caregivers and guards wept nearby.

Pope Francis came to America — to Washington, New York and Philadelphia — last week to bring healing, hope and mercy. Only time, reflection and prayer will reveal if the healing of Americans and especially of U.S. Catholics begun last week will bear fruit for the church in America.

One thing is certain: last week the shadow of Peter fell on millions of people in America and far beyond. And one more thing happened last week: Jorge Mario Bergoglio, the son of immigrants, came into his own. Though elected and installed as pope nearly three years ago, his papacy really began in the minds and hearts of North Americans last week when “Peter was among us.” We have all been touched by his shadow. And many of us, including this writer and priest, have been healed.

Father Thomas Rosica, C.S.B., is CEO of the Salt and Light Catholic Media Foundation in Canada and serves as English language attaché to the Holy See Press Office.

PREVIOUS: ‘A great blessing’ flowing all over city because of pope, says pilgrim

NEXT: Dublin to host next World Meeting of Families — in 2018