‘A great blessing’ flowing all over city because of pope, says pilgrim 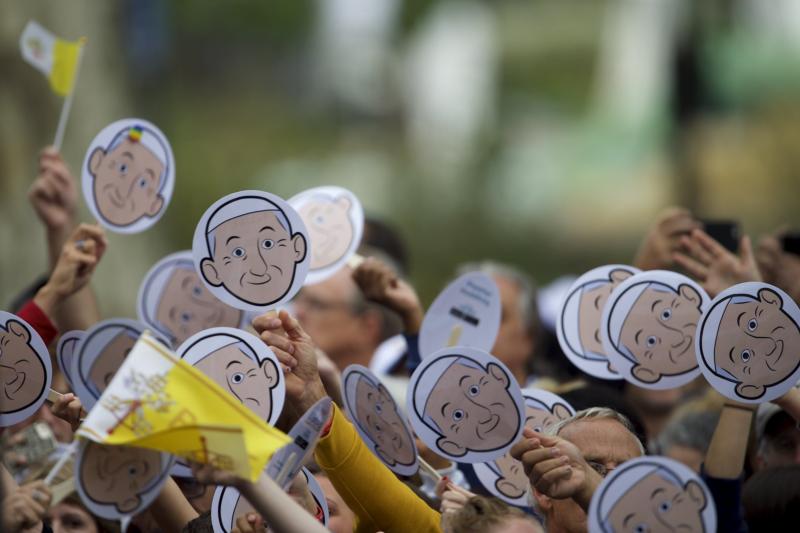 Pilgrims wave cardboard cutouts of Pope Francis as they gather outside the Cathedral Basilica of SS. Peter and Paul to see the pope in Philadelphia Sept. 26. (CNS photo/Mark Makela, Reuters)

WASHINGTON (CNS) — Two members of the Navajo Nation in New Mexico said they were delighted to see St. Kateri Tekakwitha’s name etched onto a wall of John W. Hallahan Catholic Girls’ High School in Philadelphia just outside a security checkpoint at the Benjamin Franklin Parkway Sept. 27.

Joann Crosby, 63, of Gallup and Valentina Benallie, 57, of Tohatchi talked to Catholic News Service as they waited to pass through security and await Pope Francis’ celebration of the Mass to officially close the World Meeting of Families.

Members of the Tekakwitha Conference, Crosby and Benallie were part of a 40-member group making a pilgrimage in conjunction with the papal visit.

They visited the Basilica of the National Shrine of the Immaculate Conception in Washington and St. Patrick’s Cathedral in New York, but were in both places one day after Pope Francis had visited there.

In Washington, the pope celebrated the canonization Mass for St. Junipero Serra Sept. 23 and in New York he led a vespers service Sept. 24.

The papal Mass on the Benjamin Franklin Parkway was the point where they finally could catch up to the pontiff. And they knew the family scheduled to bring the offertory gifts to the altar during Mass: Ruby and Rudy Gonzales.

“They have not missed a Tekakwitha Conference for 20 years,” Crosby said, referring to the annual conference the Tekakwitha organization holds every year.

The Gonzales family was “at the family meeting yesterday with the pope,” Benallie added. “The pope is from the Americas. He figured it was good to have the first Americans recognized.”

Benallie noted that Philadelphia Archbishop Charles J. Chaput is the episcopal moderator of the Tekakwitha Conference. It named for St. Kateri, who is the first Native American saint and is seen as a patron for all Native Americans.

“He’s a Potawatomi,” she said of the archbishop. “When he comes to (the annual conference) he says, ‘I’m family. I get to relax.'”

Before winding up its trip Sept. 29, the Tekakwitha pilgrimage group planned to visit the motherhouse of the Sisters of the Blessed Sacrament, the order founded by St. Katharine Drexel, a Philadelphian, to minister to Native Americans and African-Americans.

Kathy Roggbuck, 57, of Revillo, South Dakota, said the group had been planning the trip for at least a year.

“Most of us had to take time off from our work to get here — and pay our money” — $3,000 per person, she said. It took them two and a half hours to make it to the parkway from their hotel and through security.

“This is such a wonderful experience to be here!” exclaimed Juanita McKeever, 71, of Anoka, Minnesota, her voice rising in excitement. “I just feel a great blessing is flowing out all over this city.”

Maria Desangles, 28, an administrator at Jesuit-run Loyola University Maryland in Baltimore, was part of a delegation of 78 students, staff and graduates who came to Philadelphia.

“I thought this was going to be my only chance” to see Pope Francis, she said, but she had the chance to see him in Washington during his stay there. “I wanted to see what all the fuss was about.”

Desangles works in the university’s service office. “It’s important that students know what service is grounded in, what a Jesuit institution is all about and what the Catholic Church stands for,” she said.

Jenn Ruckel, 22, a 2014 graduate of Loyola recently returned from a year of service working at KNOM, a Catholic-run radio station in Nome, Alaska.

“To see so many people connect to him, it really awes me,” Ruckel she told CNS.

She added that “the most fortunate part of my education is the Jesuit notion of mission and service, the thing Pope Francis speaks very clearly to.”

Ruckel said her hope was to “just possibly peek into the Fiat and see him drive by.”

The Craven family of Hamilton, New Jersey, about 30 miles from Philadelphia, decided only the night before to venture into the crowd at Benjamin Franklin Parkway.

“We were unsure about whether or not we were going to go,” said Karen Craven. She and her husband, Andrew, had gone back and forth for a month over such issues as transportation, parking and security.

“We were given train tickets,” Karen said. “That’s what settled it.”

Andrew and Karen dressed their daughters Ellen, 5, Leah, 3, and Lucy, 1, in identical orange and white striped dresses in hopes they’d “keep track of them,” Andrew said. “We like to dress them up for Mass, and we’re going to a Mass.”

One difficulty they had was in getting the daughters’ strollers past the barriers lining part of the pope’s route. However, security officials lifted the strollers over the barriers to allow them to proceed.

“Evidently I see a pope every 10 years,” Andrew said.

NEXT: The shadow of Peter fell on America last week