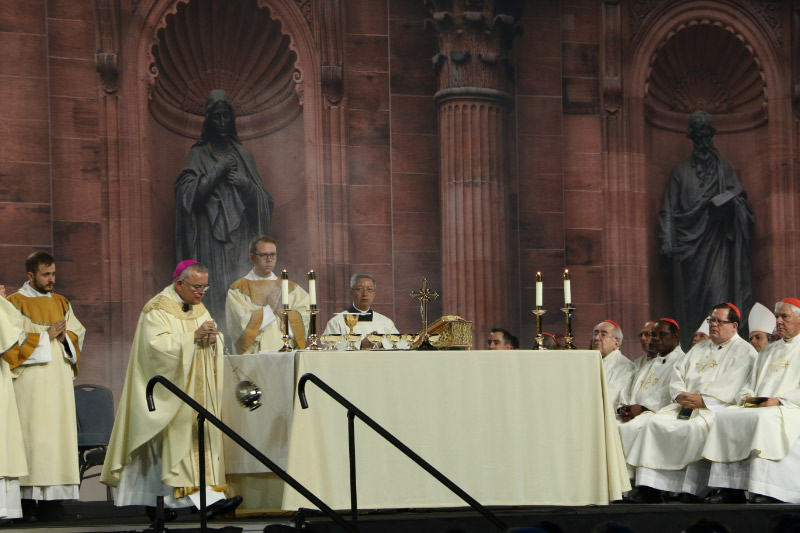 Archbishop Charles J. Chaput incenses the altar at the Pennsylvania Convention Center for the first Mass at the week-long World Meeting of Families in Philadelphia. The backdrop to the altar depicts the mother church of the Philadelphia Archdiocese, the Cathedral Basilica of SS. Peter and Paul. (Mark A. Cordero) 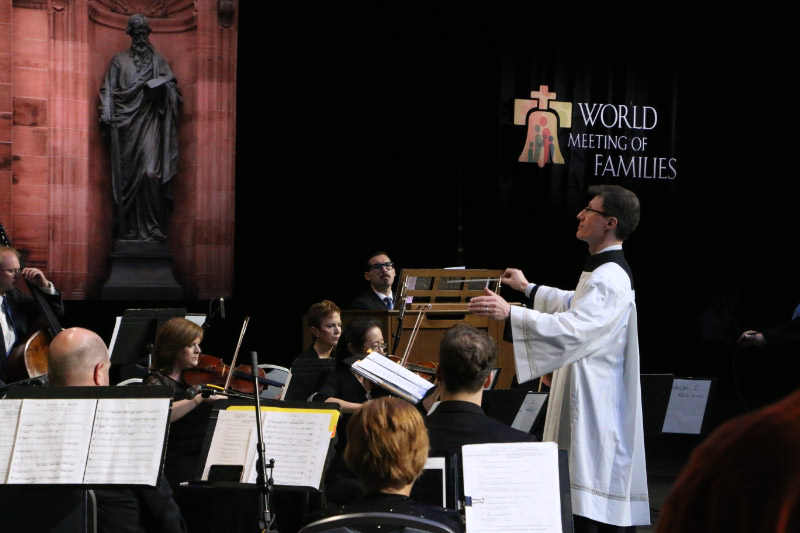 David Kimock leads a 15-piece orchestra and choir during the opening liturgy Sept. 22 at the Pennsylvania Convention Center. (Mark A. Cordero)

For two glorious hours, two halls of the spacious Pennsylvania Convention Center were transformed into an image of the Cathedral Basilica of SS. Peter and Paul, actually located about six blocks away in Philadelphia, for Mass on Sept. 22, the first day of the World Meeting of Families.

Lights were dimmed and an image of Neilson Carlin’s four-by-five-foot oil on canvas image of the Holy Family — the official icon of the World Meeting — was projected onto a backdrop depicting the cathedral, which was flanked by the coat of arms for the Archdiocese of Philadelphia and Pope Francis. The Mass was offered for the intentions of families.

Led by an escort of 20 Knights of Malta and over 60 Knights of Columbus, the entrance procession included over 150 seminarians from the archdiocese’s St. Charles Borromeo Seminary in Wynnewood, followed by 50 deacons.

Archbishop Charles J. Chaput was the main celebrant, and more than 95 bishops and archbishops, plus five cardinals, concelebrated.

According to Msgr. Joseph McLoone, pastor of St. Joseph Parish in Downingtown and coordinator for volunteers at the Mass, more than 600 priests were in attendance and, he estimated, some 10,000 people were present.

They were given a special edition of the devotional magazine “Magnificat,” with the day’s hymns marked and the readings presented in English, Spanish and Vietnamese.

The processional hymn was “Sound the Bell of Holy Freedom,” the World Meeting’s official hymn, and was sung by the Archdiocesan Choir.

A small orchestral group of 15 pieces and the choir were conducted by David Kimock, with organ pieces performed by Sándor Kádár. He is the principal organist St. Andrew Parish in Newtown, where Kimock is also the musical director.

The musical settings were selected from Norman Gouin’s “Mass of SS. Peter and Paul,” and Richard Proulx’s “Community Mass.” Jacqueline Dunleavy led the congregation as the cantor, and Jeff Chapman chanted the responsorial psalm.

According to Kathy Morris, the lay coordinator of Tuesday’s liturgical volunteers, there were over 80 ushers and 20 greeters for the event. All of them were attendees at the World Meeting and came from all over the world, speaking several languages.

Archbishop Chaput’s homily addressed the readings, which were taken from the Mass of the day: Tuesday of the 25th week in Ordinary Time. He began his homily with an explanation.

“When I was a newly ordained priest 45 years ago, many of us often felt free to find readings that matched what we wanted to say for a special occasion,” the archbishop said. “As I got older — and I hope, wiser — I decided that what I did was wrong, and that I should be faithful to the Word of God as the church gives us, and I feel compelled to preach on the Word that God has given us today.“

The readings of the day nonetheless proved quite salient for the meeting of families. Addressing the Old Testament reading from Ezra, Archbishop Chaput noted that it comes at a pivotal moment in the Israelites’ history: “Ezra was written about 420 years before the birth of Christ, at a time when the people of Israel are returning from the Babylonian Exile to the Holy Land. There, they face two dangers — and they’re very much the same dangers that we face today as well.

Emphasizing that the modern world has its own manifestations of these two dangers — of a pagan world that surrounds the church and its temptations to stray from God’s covenant with his people — Archbishop Chaput urged those gathered to “learn from the example of Jesus and how to avoid those temptations.”

Stating also that the church “is first the church of the home — the church of Mom and Dad — and that we are taught how to love one another through the family,” the archbishop reflected that the Gospel reading for the day (Lk. 8:19-21) might seem strange to some.

“It seems here that Jesus is telling us that there (also) is something more important than family life,” he said.

Family ties are important, of course, but in the Kingdom of God, “human ties of affection come secondary to faithfulness to the love of God,” and we should love God and his commandments with “all our minds and all our strength and all we have first,” the archbishop said, adding that all are members of the family of God.

Archbishop Chaput concluded by welcoming everyone once more to Philadelphia, and praying, “May God bring to completion the good things that he brings to us today.”

After Mass, the Most Blessed Sacrament was transferred to a private location at the convention center overnight, and will be brought out for exposition and adoration Wednesday morning, Sept. 23 in Room 108. Mass will be celebrated in the morning at 8:30 a.m. in the same location as the opening Mass (Halls D-E), and confessions will be heard by priests during lunchtime from 1 to 3 p.m. in rooms just inside the center’s foyer. 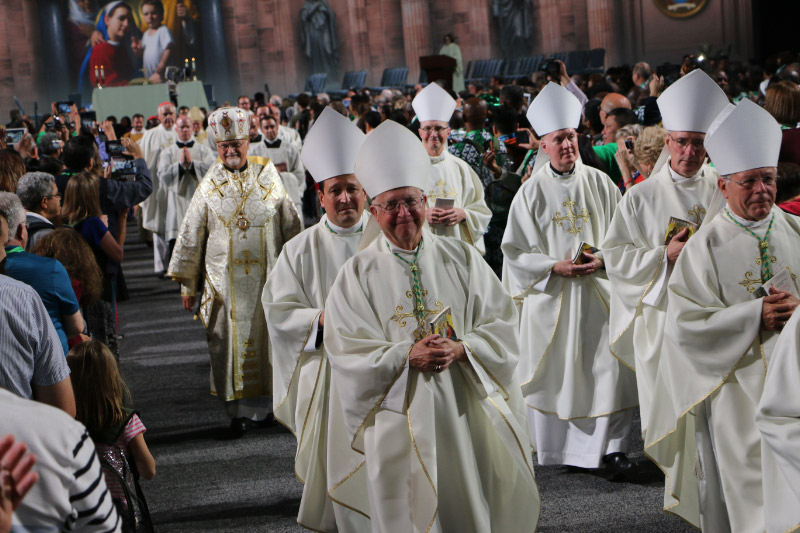 Bishops recess from the Mass at the convention center Sept. 22. (Mark A. Cordero)

NEXT: Church leaders affirm commitment to family as world meeting kicks off