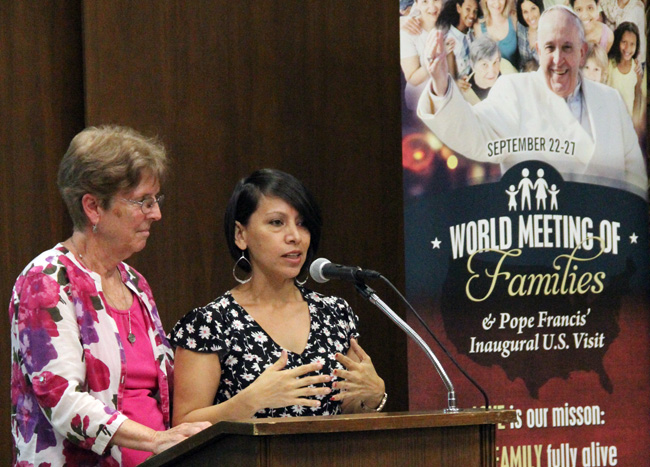 Rosa Murcia-Garcia (right), originally from Guatemala, speaks about her journey to the United States Sept 1 at the Archdiocesan Pastoral Center in Philadelphia. She now helps immigrants in her work on the staff of the Sisters of St. Joseph Welcome Center in the city's Kensington section. At left is Sister of St. Joseph Connie Trainor, director of the center. (Photo by Sarah Webb) 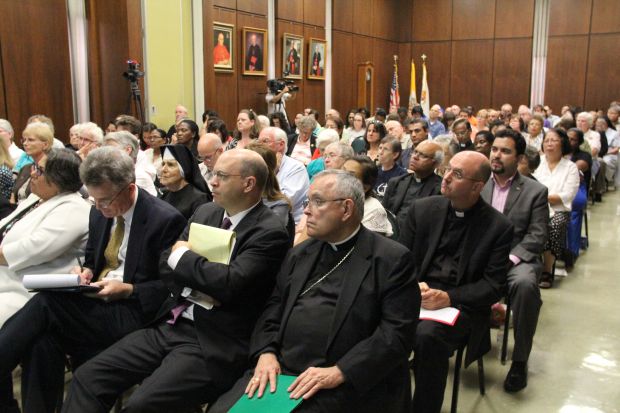 Archbishop Charles Chaput (front right), who delivered the keynote talk at the immigration conference Sept. 1 at the Archdiocesan Pastoral Center in Philadelphia, listens to a speaker along with the audience. (Sarah Webb)

Everywhere you turn today the topic of immigration, the migration crisis in Europe and who is running for president seems to dominate the national news. The Catholic perspectives on those topics were offered Sept. 1 in Philadelphia during a panel discussion titled “At Home Together: The Church and the Immigrant Family.”

It was sponsored by the Archdiocese of Philadelphia in collaboration with the World Meeting of Families, the Center for Migration Studies, Villanova University, United States Conference of Catholic Bishops/Migration and Refugee Services, and the Leadership Conference of Women Religious.

About 200 people attended the event at the Archdiocesan Pastoral Center and others joined in virtually via Livestream.com.

The room was filled with a sense of excitement and a wonderful mixture of priests, religious sisters, members of various media outlets and laity representing many different nationalities such as Africa, Ecuador, Pakistan and the Philippines.

Redemptorist Father Bruce Lewandowski, vicar for the archdiocesan Office for Cultural Ministries, facilitated and organized the evening. He set the tone by sharing the words of Pope Francis on immigration.

The priest said that “migrants, immigrants, refugees call us, they move us and challenge us. Tonight we’re gathered here to look at, reflect on (and) pray about” immigration, and to “listen to each other, dialogue about immigration and families with those words in particular in mind.”

The presentations that followed were given by various pastoral agents who care for immigrants, migrants and refugees as well as personal testimonies, those who serve in the public sector and a keynote address by Archbishop Charles J. Chaput. (Read the full speech here.)

The archbishop offered various “seeds for discussion” as he brought into focus the issue of immigration using the Holy Family as a model.

“With the Holy Family as her ‘model and protector of every migrant, alien, and refugee,’” Archbishop Chaput said, quoting Pope Francis, “the church is committed to helping migrants with the resources needed for their well-being. The duty and the privilege of that commitment apply to all of us equally.”

Attendees were given the opportunity to comment at the end of each presentation or ask questions.

Sister Connie Trainor, S.S.J., director of the Sisters of St. Joseph Welcome Center, said Catholics need to “break down the walls of isolation” offering a sense of solidarity so that immigrants know “they’re not alone in their hardships, (that) they’re finding their intrinsic worth.”

This was demonstrated in a moving moment when Rosa Murcia-Garcia, originally from Guatemala, spoke about her journey to the United States. As she spoke and shared her hardships, it was visible that hearts were being moved. A woman in the room was shedding silent tears as she listened to Rosa speak of the hardships and indifference she endured.

Today she is a naturalized citizen of the United States and currently works as the administrative assistant at the Sisters’ Welcome Center. Her story is living proof that immigrants come to this country not only to have a better life but also to make the lives of those around them better by giving back to their community.

Rosa wants to help others struggling to settle in their new home because “I can help because I know how it feels,” she said. 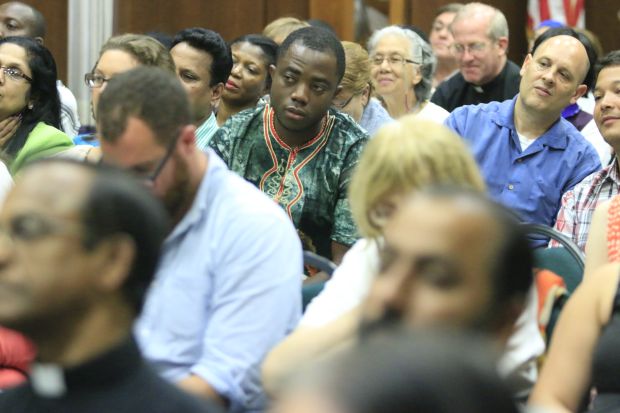 Members of the audience listen to one of the immigration-themed discussions. (Sarah Webb)

Kathia Arango, director of the archdiocesan Office for Hispanic Catholics, called the evening “an enriching experience because of the way the topic was presented with the testimonies of Hispanics who shared how they were helped, with the different congregations and organizations that are led by American citizens,” she said.

“This demonstrates that working together we can make a difference. This is the church that we need to see. It’s not the immigrant fighting for the immigrant; rather the face of the American people saying we need to stand up for those who need help, for those who are just newly arriving to this country,” Arango said.

Jennifer Rodríguez, executive director of the Philadelphia Mayor’s Office of Immigrant and Multicultural Affairs, gave an informative presentation on all the programs the City of Philadelphia offers to ensure the “equal protection of immigrants and that they’re not abused,” she said, ADDING, “immigrants are human, they are people.”

The discussion represented for Matt Davis, director for the office for Pastoral Care of Migrants and Refugees, “the kind of church that I want to be,” he said. “It represents what I deeply believe in and what I want for the world.”

The archdiocese’s only Hispanic personal parish, St. Rocco’s in Avondale, Chester County, is a fast-growing parish with 1,500 children in its Parish Religious Education Program (PREP), and its pastor, Msgr. Francis Depman attended the panel discussion.

“It’s good to see all these different groups working together,” he said. “If people can see that they’re not alone there’s more hope.”

St. Joseph Sister Linda Lukiewski, pastoral minister at Holy Innocents Parish and the St. Joan of Arc Community, gave an inspiring presentation as she spoke about the pastoral challenges, the needs of the community, the “spiritual vacuity” among young people and the characteristics needed to serve the newly arrived.

Those traits include “courage, compassion, openness, humility, a sense of humor, trust and most important of all, love,” she said. “People know you want to be with them; they prefer authentic love over perfect grammar.”

The speakers and guests shared a sense of all in one home and one church. The evening may have been crowned by the words of panelist Donald Kerwin, executive director of the New York-based Center for Migration Studies: “God did not create illegals,” he said, but human beings.

PREVIOUS: That was fast — tickets to Independence Hall address are gone