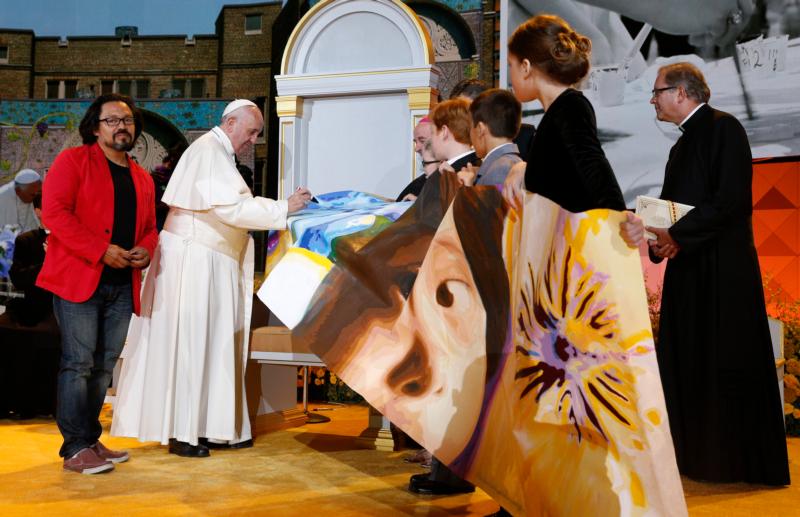 Muralist Cesar Viveros (left) stands by as Pope Francis affixes his signature to the final piece of a mural that would break a world record for the largest number of contributors. The pope signed "Francis" to the piece Sept. 26 during the World Meeting of Families in Philadelphia Sept. 26. (CNS photo/Paul Haring)

PHILADELPHIA (CNS) — As confetti rained down and cheers filled the air on the final day of the World Meeting of Families Sept. 25, a family from Argentina applied brushstrokes to a mural depicting Pope Francis — pushing the number of contributors to the paint-by-numbers mural past 2,263 and into the Guinness Book of World Records.

Catire Walker and Noel Zemborain and their four children had traveled 13,000 miles through 13 countries to attend the World Meeting of Families, joined hundreds of people at the gathering in helping to paint the mural that will eventually be permanently displayed at the future home of St. Malachy School in Philadelphia.

Cesar Viveros, the Philadelphia muralist who designed the artwork, told the Catholic Review, newspaper of the Baltimore Archdiocese, that he was overwhelmed and surprised to see so many people contribute.

“Since this is the city of murals, it made total sense to make a mural as a monument for this special moment in history marking the pope’s visit,” he said. “It’s very rewarding to know that people really care about building things together.” 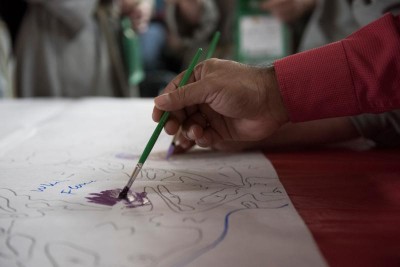 The art was commissioned by the World Meeting of Families and the City of Philadelphia Mural Arts Program. “The Sacred Now: Faith and Family in the 21st Century” was crafted from 153 panels measuring 5 feet by 5 feet.

In a morning news conference, Jane Golden, executive director of the Mural Arts Program, said the project achieved its goal of including people from many cultural backgrounds across the city, throughout the region and around the world.

“When this mural goes up in North Philadelphia, globally people can point to this and say, ‘I helped create that,'” she said. “This work is beautiful, but it also has extraordinary meaning.”

Working on the design, which features Pope Francis and diverse images of children, had a spiritual impact on the artist.

“It really revived me because at some point I was feeling a little bit down because I wasn’t doing any more exciting projects,” he told the Catholic Review, “and to have the chance to participate, I was very excited when I was called.”

According to the Mural Arts Program, 330 gallons of mural paint will be used on the final project and 565 shades of color hand-mixed by the artist. The final mural will have more than 1.6 million brushstrokes applied.

On Sept. 26, during the Festival of Families in front of the Philadelphia Museum of Art, Pope Francis signed the last piece of the mural — writing “Francis” in “nice big letters,” said a news release from the Mural Arts Program.

Matysek is assistant managing editor of the Catholic Review, newspaper of the Archdiocese of Baltimore.

NEXT: Homily of Pope Francis at Mass on Ben Franklin Parkway