Cardinal warns of harm to families due to climate change 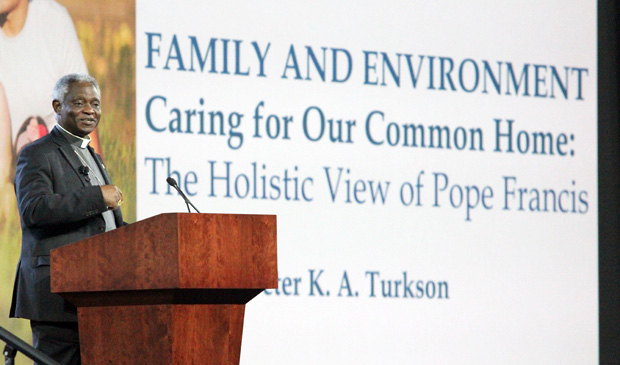 Cardinal Peter Turkson of Ghana speaks on the linkage of family and the environment evident in Pope Francis' encyclical "Laudato Si'," during a session Sept. 23 at the World Meeting of Families in Philadelphia. (Sarah Webb)

Pope Francis’ call for “swift and unified global action” on stewardship of the environment in his major encyclical, “Laudato Si’,” has received much attention and discussion since its release in May.

In a World Meeting of Families session Sept. 23 sponsored by Northeast Philadelphia’s Holy Family University, Cardinal Peter Kodwo Appiah Turkson, the archbishop emeritus of Cape Coast, Ghana discussed the interrelatedness of two kinds of families — our own “immediate” family and the wider human family – and their linkage together toward a common goal.

Cardinal Turkson was in large part responsible for drafting the papal encyclical, which is subtitled “On care for our common home,” and he expounded on the theme in his talk.

The cardinal was presented to the audience in a series of introductions, first by the president of the Holy See’s Pontifical Council for the Family, Archbishop Vincenzo Paglia. He asked audience members to reflect on a portion of “Laudato Si’,” which first and explicitly defines the family’s role in forming a relationship to the wider world.

“‘In the family we first learn how to show love and respect for life; we are taught the proper use of things, order and cleanliness, respect for the local ecosystem and care for all creatures,’” Archbishop Paglia quoted from paragraph 213 of the encyclical. “These lines are few, but our lives can be built from them.”

President Juan Carlos Varela of the Republic of Panama was called to the dais to introduce Cardinal Turkson formally. 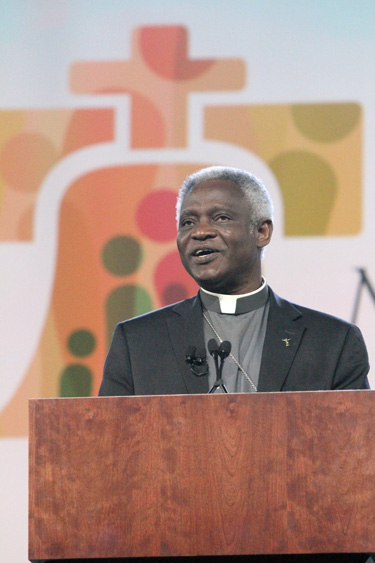 The core of the cardinal’s message was that Pope Francis’ encyclical connects the environment inextricably with humanity. Creation is not a separate background or a mere resource; according to “Laudato Si’,” the environment is as much a part of humanity as humanity is part of the environment. Because of this interdependence, the moral importance of ecology on families is undeniable, according to Cardinal Turkson.

“The family can easily suffer a two-fold or a linked vulnerability from the viewpoint of the economy,” he said, citing such economic factors as lack of decent work resulting in insufficient salary, joblessness, insecurity, or trafficking and slavery, “and from the viewpoint of ecology” including malnutrition resulting from insufficient access to water and food, few housing options and exhausted farm lands or fisheries.

Because humanity and the environment are united — and that an accelerated change and impact is undeniable and linked with human activity – humanity is at risk of succumbing to “grave errors,” Cardinal Turkson said. They include a throwaway culture that does not value resources and “the naïve confidence that technology will eventually solve all our problems with the environment,” he added.

Pope Francis therefore is right to “aggressively chastise … those that luxuriate in unbridled greed and (this) throwaway culture that threatens the whole human family,” the cardinal said. He believes the pope is calling for an examination of the fundamentally ethical nature of the environmental crisis through dialogue among religious groups and the recovery of an authentic spiritual direction.

Cardinal Turkson described the current ecological situation as uniquely “intergenerational” and “intragenerational” in its moral requirements. There is, he said, a distinct need to look toward today’s children and their children’s children. But less talked about — and a point that Pope Francis emphasizes — is the intragenerational challenge to look toward those who are the most vulnerable to climate change and the food shortages and environmental disasters that it engenders.

Quoting Francis again, Cardinal Turkson said, “Let us not only keep the poor of the future in mind, but also today’s poor, whose life on this earth is brief and who cannot keep waiting.”

Wrapping up, Cardinal Turkson emphasized a perhaps hitherto unnoticed aspect of the encyclical. Pope Francis uses language that has traditionally been described as “stewardship” or “custodianship.” Only once, the cardinal noted, is either word used in “Laudato Si’,” particularly with regard to the inspiration of St. Joseph, the chaste spouse of the Blessed Mother; he is the custodian of the Holy Family and as such inspires in us the custody for everything that God has made.

Rather than stewardship, the cardinal said, “The Holy Father prefers to talk about care, and there is a difference.”

Stewardship and custody, said Cardinal Turkson, are impassionate. But if one cares, one is connected. Key to this is one’s conception of relationships, “which are not only based on contracts.” Rather, he said, we have covenants between ourselves and our environment. When these covenants are violated and broken, they must be repaired. Relationships based on covenant require reparation, and when “justified” (rendered “just” again) they allow us once more to be in proper relationship to one another.

Cardinal Turkson waxed poetic at his most fundamental point: “God created two things, and two things only: the human person and the universe as his home. And the Bible refers to this home not as just anything. It is referred to as a garden. God gave us a garden for our home. Let us not bequeath a wilderness to those that come after us.”

PREVIOUS: March into the world in image of God, bishop tells families’ congress

NEXT: Canadian speaker tells of personal experience with divorce, annulment