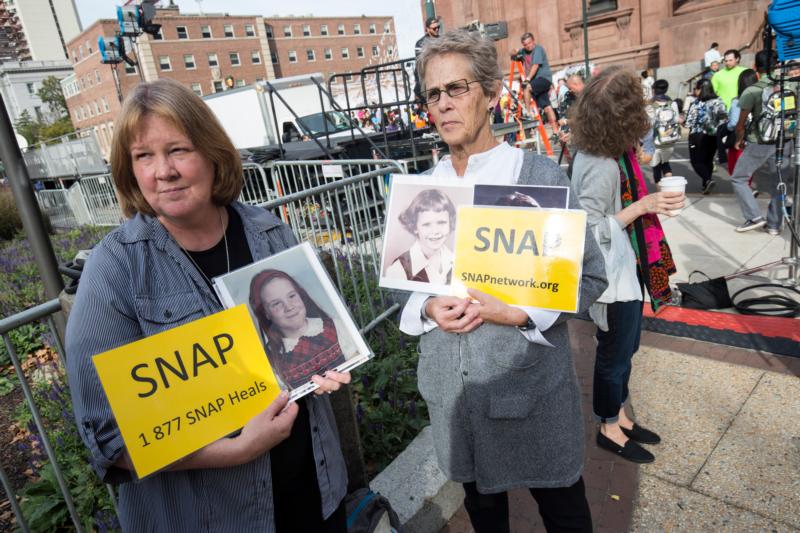 Becky Ianni of Burke, Va., and Barbara Dorris of St. Louis, both members of Survivors Network of those Abused by Priests demonstrate in front of the Cathedral Basilica of SS. Peter and Paul in Philadelphia Sept. 25. The pope met privately with a group of survivors of sexual abuse in Philadelphia Sept. 27. (CNS photo/Joshua Roberts)

PHILADELPHIA (CNS) — Pope Francis met with a group of survivors of sexual abuse Sept. 27 and later told bishops that he was overwhelmed by a sense of embarrassment and was committed to holding accountable those who harmed children.

In a meeting with cardinals, bishops, priests and seminarians in St. Martin’s Chapel at St. Charles Borromeo Seminary, the pope prefaced his address on the importance of the family by saying that he had met with the group as arranged by Philadelphia Archbishop Charles J. Chaput. The Vatican said the 30-minute meeting, with three women and two men abused by members of the clergy or their families or their teachers, was held at the seminary shortly before the pope addressed the bishops.

“It is engraved in my heart, the stories, suffering and pain of the children abused by priests,” the pope said. “I continue to feel an overwhelming sense of embarrassment because of those who had in their care the little ones and caused them great harm.

“I am deeply sorry. God cries,” he said.

He said that “the crimes and sin of sexual abuse of children can no longer remain secret” and that he “committed the close vigilance of the church to protect the children, and I promise that all responsible will be held accountable.”

In his earlier meetings with bishops during his six-day U.S. visit, he told them that he continued to be hurt by news of sexual abuse of children and wanted them to be more vigilant.

For years, the Philadelphia Archdiocese has been rocked by years of sexual abuse by priests and has sold church-owned properties and scaled back ministries to resolve teetering finances, but not specifically to settle lawsuits. Earlier this year, Bishop Robert Finn of Kansas City-St. Joseph, Missouri, resigned after being the first bishop convicted of a misdemeanor for failing to report to authorities the sexual abuse of children by a priest.

In 2014, Pope Francis met in Rome with victims of sexual abuse by clergy. However, many groups, including members of Survivors Network of Those Abused by Priests or SNAP, continue to be critical of the Vatican and claim it has not done enough for the victims.

In his private meeting at the seminary, Pope Francis told the survivors that they were an inspiration and “ministers of mercy.” He also prayed with them and said he shared their pain, suffering and shame.

“We owe each of them and their families a gratitude for their great courage to bring the light of Christ of the sexual abuse of children,” he told the bishops.

In his address on the importance of the family, Pope Francis challenged the bishops to provide more pastoral leadership and guidance in a “consumerism” culture and to encourage young people to opt for marriage and family despite challenges that keep many from the sacrament.

His speech at the seminary came about 12 hours after a star-studded Festival of Families celebration that showcased the importance of the family. In unscripted remarks at the festival, Pope Francis said the institution of marriage, despite its many challenges, should continue to be protected.

“Without the family, not even the church would exist. Nor could she be what she is called to be, namely ‘a sign and instrument of communion with God and of the unity of the entire human race,'” the pope said, quoting “Lumen Gentium,” the Second Vatican Council’s Dogmatic Constitution on the Church.

“Needless to say, our understanding, shaped by the interplay of ecclesial faith and the conjugal experience of sacramental grace, must not lead us to disregard the unprecedented changes taking place in contemporary society, with their social, cultural — and now juridical — effects on family bonds,” the pope said.

As the number of marriages decline and more and more states across the country legalize same-sex marriage, the pope said the consumerism culture allows people to follow the latest trends, and their loneliness discourages establishments of close bonds and the devouring of everything, including religion, until the next fad.

As he had done on several occasions during his U.S. visit to the United States, the pope challenged the bishops to do more to help refortify the family, especially the young people, the future of the church.

“Many young people, in the context of this culture of discouragement, have yielded to a form of unconscious acquiescence,” he said. “Many put off marriage while waiting for ideal conditions, when everything can be perfect. Meanwhile, life goes on, without really being lived to the full.

“We need to invest our energies not so much in rehearsing the problems of the world around us and the merits of Christianity, but in extending a sincere invitation to young people to be brave and to opt for marriage and the family,” he said.

Pope Francis said that priests give up a family to care for a larger one in an effort to bring them closer to God.

“Our ministry needs to deepen the covenant between the church and the family,” he said. “Otherwise it becomes arid, and the human family will grow irremediably distant, by our own fault, from God’s joyful good news.”

Contributing to this story was Laura Ieraci.

PREVIOUS: Text of pope’s Q&A with media on plane to Rome

NEXT: Argentine family on 13,000-mile road trip to Philadelphia to see pope