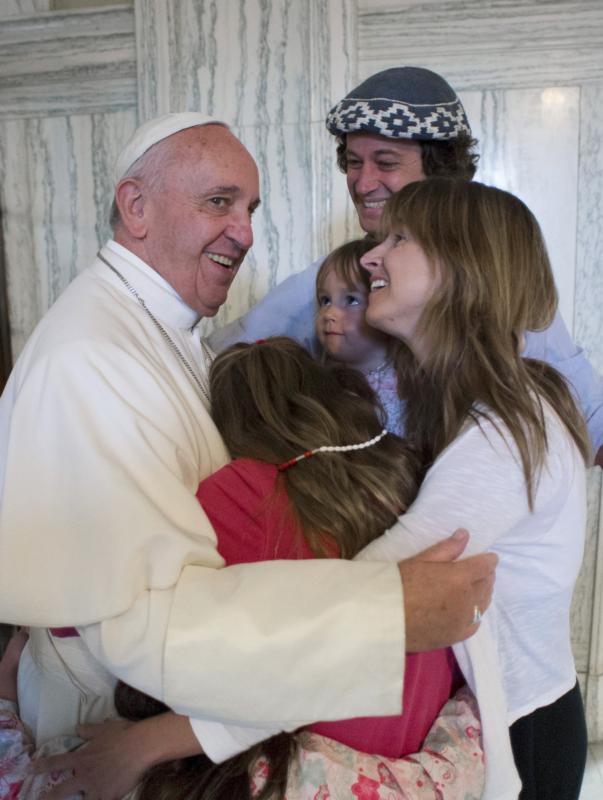 Pope Francis embraces the Walker family of Buenos Aires, Argentina, Sept. 27 in Philadelphia. Catire, Noel and their four children -- Cala, 12, Dimas, 8, Mia, 5, and Carmin, 3 -- traveled 13,000 miles to be with Pope Francis during the World Meeting of Families. (CNS photo/L'Osservatore Romano via Reuters)

RALEIGH, N.C. (CNS) — The Walker family filed through the side entrance of Sacred Heart Cathedral in Raleigh.

A bag on her shoulder and a 3-year-old on her hip, mom Noel Zemborain smiled. A pack at his waist, dad Catire Walker held the door as their three older children passed by.

At least 50 adults from Father Chesco Garcia’s Bible study were awaiting the arrival. They clapped and cheered at the announcement; some of their children twirled in the aisle.

It isn’t every day one meets travelers who’ve logged 13,000 miles in a 1980 Volkswagen Kombi bus.

The Walker family departed Buenos Aires, Argentina, in March. Their goal was to reach Pope Francis and the World Meeting of Families in Philadelphia, which opened Sept. 22 and officially ended with a Mass celebrated by the pope Sept. 27 on the Benjamin Franklin Parkway.

Earlier that day the whole family got their wish — they were granted an audience with the pope.

CBS News reported there were laughs and hugs all around, and the Vatican spokesman, Jesuit Father Federico Lombardi, said meeting the family touched the pope “very, very much.”

For the Walker family, Raleigh, like cities in Chile, Ecuador and Mexico, was simply a stop along the way.

Catire, Noel and their four children — Cala, 12, Dimas, 8, Mia, 5, and Carmin, 3 — spent two nights with host couple William Cardona and Andrea Blanco, who work in diocesan Hispanic ministry and planned to be at the family meeting.

The Argentine family visited St. Michael Church Sept. 15 for a blessing and Sacred Heart Cathedral Sept. 16. They fielded questions from the faithful. Father Garcia asked them how they felt when fellow Argentine Cardinal Jorge Mario Bergoglio was elected pope. They felt happy, they answered, even better than if their country had won the World Cup.

People wanted to know where the idea came from (they really can’t remember, they said), how they chose the vehicle (a friend took a trip in a similar vehicle), where they stayed (bus, tent and strangers’ homes) and how many countries they visited (13).

“We want to celebrate family with this trip. Our message is … family is the best we have,” Catire said.

It’s a dream that seemed crazy, Noel added, but has been the best experience of their lives.

Cathedral parishioner Erlinda Garcia listened to the visitors share their story. She was impressed by how they connected with their children and made the trip without things such as computers and televisions.

“They talked about the people they met … every country had beautiful places and things, but they enjoyed meeting people the most,” she added. “They said, ‘Don’t let anyone tell you that you can’t do something.’ Anything is possible.”

Watson writes for NC Catholic, magazine of the Diocese of Raleigh.

NEXT: Crowd at papal Mass reflected on ‘little things’ in big weekend