Pope’s message on immigrants shows all how to ‘love more, love better’ 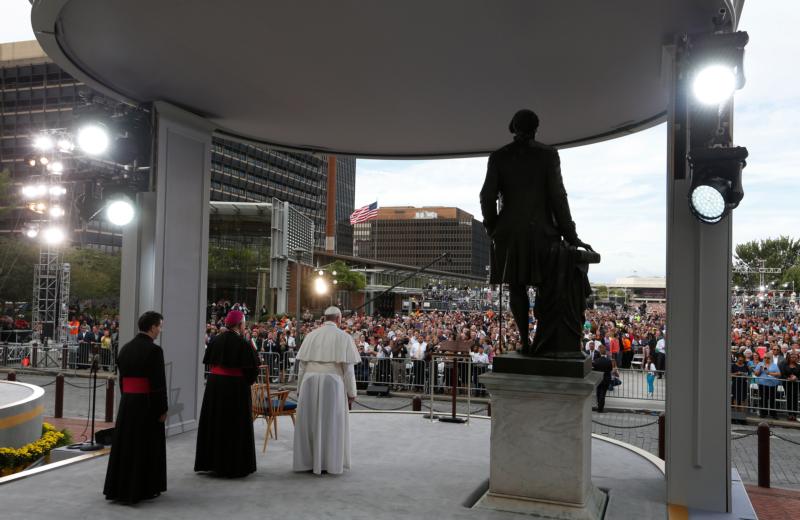 Pope Francis looks out to the crowd as he arrives to give an address from Independence Hall in Philadelphia Sept. 26. (CNS photo/Paul Haring)

PHILADELPHIA (CNS) — San Antonio Archbishop Gustavo Garcia-Siller believes Pope Francis’ call for the church to serve immigrants and people on the move around the world will inspire the church to respond with love and care for people seeking a new home.

Waiting for the pope to arrive at Independence Mall for an afternoon address on immigration Sept. 26, Archbishop Garcia-Siller said it will take people working one-on-one with immigrants to help meet the needs of newcomers.

“He is all about going to the peripheries, helping people to mobilize so they can experience what everyone has experienced: happiness, peace and having their needs met,” Archbishop Garcia-Siller told Catholic News Service.

“The immigrants, yes, want papers, but above all they want to know that somebody cares for them,” he said. “He is showing us we can love more and love better.”

People throughout the audience on the grassy area in front of Independence Hall expressed hope that the pope will inspire more people, especially policymakers, to react with compassion to the needs of immigrants.

They also said they have been inspired by Pope Francis’ concern for immigrants and that his emphasis on mercy and forgiveness has brought people back to the Catholic Church.

Thomasina Kweku-Kennedy, a member of St. Ignatius Church in Philadelphia, who is involved in archdiocese’s Pastoral Care for Migrants and Refugees program, said those who have returned to her parish in particular often say they have been moved by the pope’s compassion. 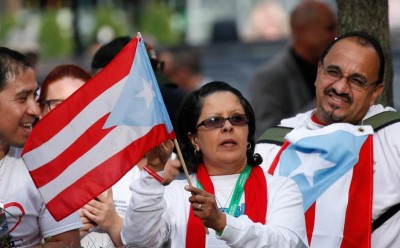 A woman holds the flag of Puerto Rico as Pope Francis addresses a crowd at Independence Hall in Philadelphia Sept. 26. In his talk the pope spoke about religious freedom and immigration. (CNS photo/Paul Haring)

“He shares the love that we don’t always experience,” she said.

At the back of ticket seating area, Thomas Sankarathil, a member of St. Jude Syro-Malankara Catholic Church, Philadelphia, and general secretary of the Ecumenical Fellowship of Indian Churches in Philadelphia told CNS that his parish also has seen people returning to the church because of Pope Francis’ outreach to forgotten people.

The pope is “the universal face of the church,” he said.

“This is an opportunity to be sure that family is the fundamental foundation of the living church for the betterment of humanity,” he told CNS. “This is a time the Christian community all over the world is suffering persecution. He is giving us the confidence to be faithful for the benefit of the church.”

As he waited for the pope to arrive, Archbishop Alexander K. Sample of Portland, Oregon, was updating his followers on Facebook and Twitter.

“I hope to take back the joy and the enthusiasm the Holy Father has brought to the church here in the United States,” he said. “It’s no secret that western Oregon and the Northwest in general is considered one of the unchurched areas of the United States, and yet in such a secular culture so many people you meet on the street who may have no religious background are just very taken with this pope.

Theresa Romanowski, a member of St. Adelbert Parish, in the Port Richmond area of Philadelphia, said: “He is a pope of hope. He feels everyone should be loved and treat equally.”

Pope Francis’ speeches at the United Nations and Congress showed his concern for the people of the world who are being persecuted and those who are leaving their homelands to seek security elsewhere. “He’s getting people to do something positive about it,” she added.

Jerkin Lebron said the pope brings hope to all but especially to the unit that needs it most: the family. “He is an especially great hope for Catholic Hispanics,” she said, because he understands especially how immigration affects them.

“We have a challenge in immigration,” she said because it means separation of family members including parents and their children. Her brother, for example, has a son he hasn’t seen in 10 years. “The only contact they have is by phone,” she said, because he is not able to come into the country.

Sometimes people migrate “seeking a better life but that means separation,” said Maria Rodriguez, who was in line waiting to get a glimpse of the pope near Independence Hall. The separation means disintegration of this important unit in society, she said.

When the family is not together, there is no one to guide children or pass down important values, added Rafael Abreu, who said the most basic challenge for a family these days is to accept Christ in an increasingly secular society. When the family disintegrates, so does society, he said.

Clara Alba said that even when the family migrates together, they still face strong challenges. Because migrant families may struggle financially at the beginning of a new life in a new land “they have to go to work” sometimes including taking multiple jobs, she said. “They begin retreating from God” because there is no time to go to church simply because of work demands, she said. “There is a lack of time” for God, for family “and that’s how values get lost,” Alba said.

But the pope, as the representative of Christ on earth, brings hope, added Rodriguez. “He gives importance to family unity and to the domestic church,” which is the family, she said.

Peter James Alindogan traveled to Philadelphia from Cinnaminson, New Jersey, with his family and friends. He stood with his Filipino colleagues outside Independence Hall holding his native flag before Pope Francis gave his speech on Immigration and religious freedom.

His remarks on immigration “are very timely considering the immigration in Europe,” Alindogan added. “In the past, immigration was set aside. It only comes out during election time.”

“(Donald) Trump made a big splash about it because he would like to deport immigrants,” he told CNS. “But you’re not just talking about deporting them; it also affects a lot of people who rely on these immigrants in terms of work.”

Hispanics’ strong presence was evident during the pope’s visit to Philadelphia. According to the Hispanic Chamber of Commerce, more than 400,000 Hispanics live in the Philadelphia area. Many traveled from different states to catch a glimpse of the pope.

Hector Astudillo, who was born in Ecuador but resides in Folsom, Pennsylvania, said the U.S. “could create a better immigration plan that doesn’t come “with the fear of leaving our families.”

“I believe the pope has a message for the authorities in the U.S,” he said. “Immigrants built this country; we should have the opportunity to work and not have to hide or be afraid.”

That morning, Maynor Cante and his family arrived at Philadelphia’s Cathedral Basilica of SS. Peter and Paul at 1:30 a.m. (EDT) from Rhode Island to see Pope Francis ride in his motorcade to the entrance of the church. Cante emigrated from Guatemala to the U.S. in 1997 with his brother seeking security.

“The pope talks a lot about immigration,” he said. “I feel very happy because he talks about the family and he also considers himself an immigrant. It fills me with happiness because even if the presidential candidates don’t listen to him, the people still will. He’s going to open the hearts of people.”

Watching the pope’s speech at Independence Mall from the front row was Mother Mary of the Sacred Heart, from Washington. She is a member of the Servants of the Lord and the Virgin Matara religious order.

“He’s brought such encouragement to all people in a very special way to Catholics in the both Americas.” she said.