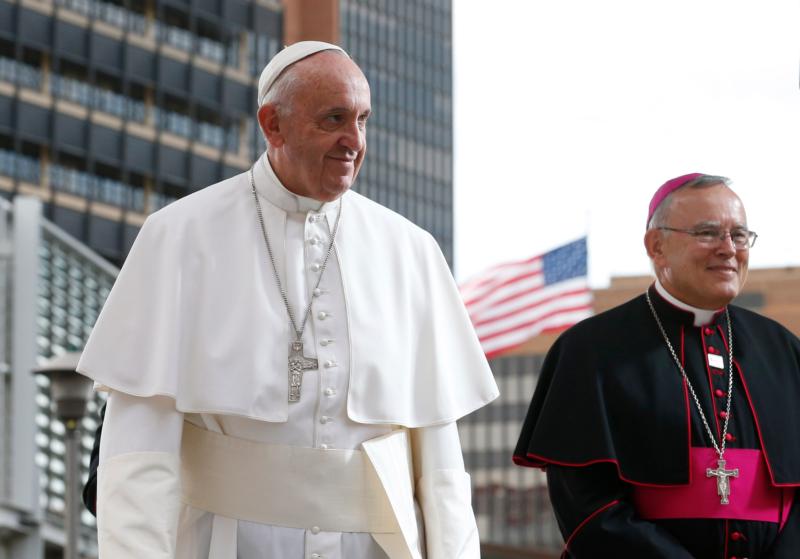 PHILADELPHIA (CNS) — The theme of religious freedom ran through Pope Francis’ remarks at several stops during his historic trip to the United States, not just at Independence Mall in Philadelphia, said Baltimore Archbishop William E. Lori.

“It’s interesting how many times the Holy Father spoke about religious freedom,” the archbishop said, noting he first spoke of it at the White House, then in his address to a joint meeting of Congress and finally in Philadelphia in front of Independence Hall, the iconic symbol of the nation’s principles of freedom.

“He spoke about religious freedom as integral to a transcendent human dignity … as a fundamental good in society,” Archbishop Lori told Catholic News Service in a phone interview Sept. 26 as the Festival of Families that evening was getting underway. “He spoke of it as a universal right that belongs to all people. He also framed it as an immense good.”

The archbishop made the comments as chairman of the U.S. Conference of Catholic Bishops’ Ad Hoc Committee for Religious Liberty.

“Religious freedom enables individuals in church and community to (work) for the common good of society,” the prelate continued, “and he spoke about obligation of government to protect and foster religious liberty as a God-given right. Especially important is the way he linked it to not only worship but also to service to the poor, the needy and the vulnerable.”

At the White House Sept. 23, his first full day in the U.S., Pope Francis noted Americans’ concern that “efforts to build a just and wisely ordered society respect their deepest concerns and their right to religious liberty.”

He told Congress Sept. 24 that “a nation can be considered great when it defends liberty.” In Philadelphia, he said when a government respects the right of its citizens to profess their faith freely and to live it publicly, the whole society benefits.

Following his remarks at Independence Mall, some commentators pointed out Pope Francis made no specific reference to the U.S. Catholic Church’s fight against the Obama administration’s mandate that most employers, including religious ones, provide free contraceptive coverage in employee health plans even if the employer has moral objections to do so. Lawsuits challenging the mandate argue it violates religious freedom.

Archbishop Lori said the U.S. bishops had no expectation Pope Francis would “address directly any specific law or regulation.”

“We expected the Holy Father to express the social teaching of the church, which includes religious freedom, and to do so in his own style,” he told CNS, but added that the pope “did in a way address it” — with his unexpected visit to the Little Sisters of the Poor in Washington after the Serra canonization Sept. 23.

A lawsuit against the mandate led by the Little Sisters has been winding its way through the courts. The latest action in the suit came Aug. 21 when the 10th U.S. Circuit Court of Appeals granted a temporary reprieve to the religious order until the Supreme Court rules on the case, protecting the sisters from having to pay fines for not implementing the mandate.

Asked how he thinks Americans are reacting to Pope Francis, Archbishop Lori said, “First of all the crowds are tremendous. I went from Independence Hall to the Festival of Families and the crowds were thick lining the streets, very deep. As we rode by, they were terrifically enthusiastic, waving at busloads of bishops (even). This is really an enthusiastic crowd. I thought to myself it was really wonderful.”

Besides Philadelphia, Archbishop Lori was in Washington for the papal events there.

“I think people love him because he’s first of all he’s a person who is very human and humane,” the archbishop said. “They understand he cares about them, he wants to link them to God and that he really lives the faith he professes,” the archbishop said. “And I think we’re hungry, starved for leaders on the world stage who are like that and in many ways I think he stands out as unique in today’s world.”

PREVIOUS: Pope’s message on immigrants shows all how to ‘love more, love better’

NEXT: Scenes from the papal visit in Philadelphia