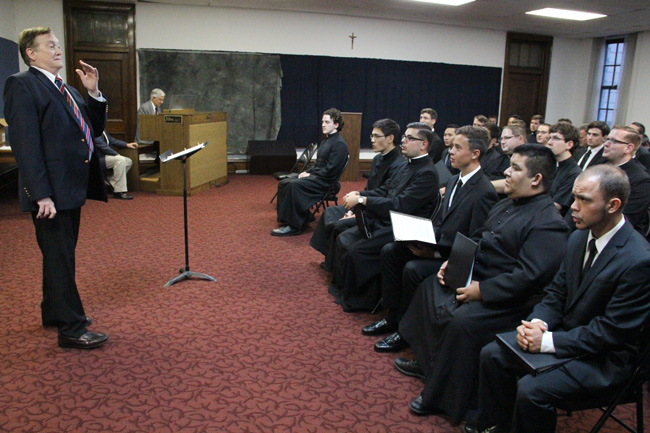 Michael Stairs conducts a rehearsal of the St. Charles Borromeo Seminary choir Sept. 9 at the seminary. Accompanying him on the organ (at rear) is the seminary's director of sacred music, Rudolph A. Lucente. (Photos by Sarah Webb) 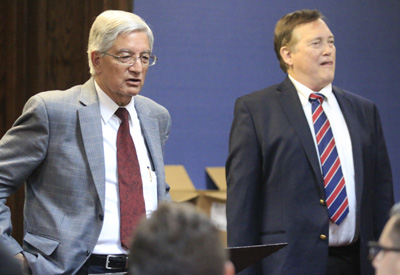 A first-class seminary needs a first-class liturgical music program. St. Charles Borromeo Seminary, which has seen a dramatic increase in the number of new men studying for the priesthood, has also moved its music program up a notch through the appointment of Rudolph A. Lucente as director of sacred music and Michael Stairs in a newly created position of artist in residence.

Both men are recognized in Philadelphia and beyond for their musicianship and especially as organists and choir developers.

“St. Charles Seminary is honored to welcome these talented musicians to our community,” said Bishop Timothy C. Senior, the rector of St. Charles Seminary, who is himself an accomplished pianist in his own right. “We are excited to have them revitalize our music program, support our liturgical life and share their talents with our seminarians and our entire archdiocese, especially as we prepare to welcome Pope Francis to Philadelphia.”

Lucente comes to the seminary with substantial experience in church music as a director, organist, clinician, consultant and concert artist. A long-time consultant at his home parish, St. Rose of Lima in North Wales, he assisted at the organ for 32 years at the Grand Court Organ at John Wanamaker (now Macy’s) for years as well as the Kimmel Center. He is also the dean of the Philadelphia Chapter of the American Guild of Organists.

(Watch a recent rehearsal of the seminary choir below.)

Stairs, who is the organist for the Philadelphia Orchestra, held the Buck Chair of Music for Haverford School and until retirement was director of music at the Church of the Redeemer in Bryn Mawr. Like Lucente, he was an assistant at the Wanamaker Grand Court Organ and concert performer throughout the country. 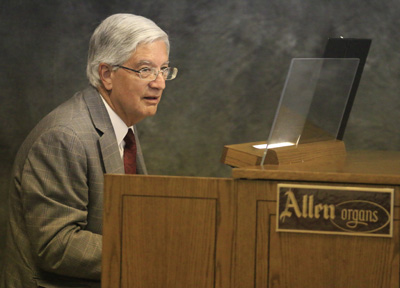 Rudolph Lucente comes to the seminary with substantial experience in church music as a director, organist, clinician, consultant and concert artist. For 32 years he played the Grand Court Organ at John Wanamaker (now Macy’s). He is also the dean of the Philadelphia Chapter of the American Guild of Organists. (Sarah Webb)

Both Lucente and Stairs are members of the Philadelphia Organ Quartet, a unique group that originally formed to play a memorial concert in honor of Keith Chapman, who was the chief organist for the Wanamaker Organ before his death in an accident in 1993. Since then they have played together at a number of venues capable of supporting four organs, including Longwood Gardens, Macy’s and Ocean City Tabernacle.

When Bishop Senior was seeking to fill the vacant post of music director at the seminary he turned to Lucente, whom he had known for many years, beginning with his own school days at St. Rose of Lima.

For his part, Lucente was willing to take on the challenge, which he said will be “assisting the seminarians through music in the worship and prayer life of the seminary as they pursue their vocation to the priesthood. Michael Stairs feels the same way.”

It was Lucente who suggested Stairs be asked to participate in the program because of his special expertise in training male voices, and so far response by the seminarians has been so strong that they have had to move rehearsals to a larger space. 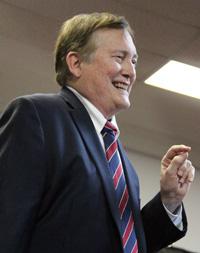 Michael Stairs, who is the organist for the Philadelphia Orchestra, has special expertise in training male voices. (Sarah Webb)

At this point it has not been finalized as exactly what the participation of the newly formed choir will be during the visit of Pope Francis to the seminary, but Lucente is no stranger to papal appearances.

In 1999, when Pope John Paul II visited St. Louis, the archdiocesan music director John Romeri (later named music director for the Philadelphia Archdiocese but who has since moved on) asked Lucente to be organist at the St. Louis papal Mass.