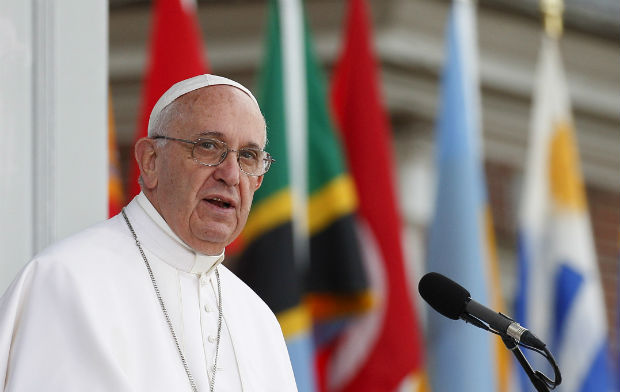 Your Holiness, distinguished guests, and friends,

The United States is an experiment in freedom ordered by law and ordered to basic truths about the human person.  The greatest goods in the American character come from our belief in a merciful God — a God who guarantees the dignity and rights of all his children.

Alexander Hamilton was one of America’s greatest Founding Fathers.  He helped write our Constitution right here at Independence Hall.  He was also one of our greatest immigrants.  Born in the West Indies, Hamilton was a friend to George Washington.  He fought in the Revolution, wrote nearly two-thirds of The Federalist Papers and set the United States on a course to become a world power.

The lesson in his life is simple: This is a nation that no single ethnic group or privileged economic class “owns.”  It’s a country where a person who comes from nowhere can still make a difference.  It’s a nation where a man who never knew his own birthday – Hamilton was born out of wedlock — can take part in the birth of a new order.  He reminds us that immigrants from around the world renew this country in every generation.  They breathe new life into what George Washington called the “bosom of America.”

We live at an odd time in history.  When the Church defends marriage and the family, the unborn child and the purpose of human sexuality, she’s attacked as too harsh.  When she defends immigrant workers and families that are broken up by deportation, she’s attacked as too soft.  And yet she is neither of those things.

Pope John XXIII – now St. John XXIII — described the Church as the “mother and teacher” of humanity — a mother who understands and loves the whole human person; from conception to natural death; always, consistently and everywhere.  When it comes to immigration, the Church reminds us that in the end, all of us are children of the same loving God.  That makes us brothers and sisters, despite the borders that separate us.  And in arguing over borders to keep people out, we need to be vigilant against erecting those same borders in our hearts.

The person who can speak that truth most powerfully is with us today, and I invite the Holy Father to share his thoughts with us now. 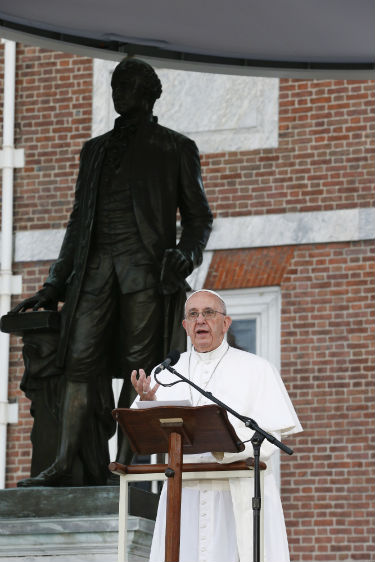 One of the highlights of my visit is to stand here, before Independence Hall, the birthplace of the United States of America.  It was here that the freedoms which define this country were first proclaimed.  The Declaration of Independence stated that all men and women are created equal, that they are endowed by their Creator with certain inalienable rights, and that governments exist to protect and defend those rights.  Those ringing words continue to inspire us today, even as they have inspired peoples throughout the world to fight for the freedom to live in accordance with their dignity.

But history also shows that these or any truths must constantly be reaffirmed, re-appropriated and defended.  The history of this nation is also the tale of a constant effort, lasting to our own day, to embody those lofty principles in social and political life.  We remember the great struggles which led to the abolition of slavery, the extension of voting rights, the growth of the labor movement, and the gradual effort to eliminate every kind of racism and prejudice directed at successive waves of new Americans.  This shows that, when a country is determined to remain true to its founding principles, based on respect for human dignity, it is strengthened and renewed.

All of us benefit from remembering our past.  A people which remembers does not repeat past errors; instead, it looks with confidence to the challenges of the present and the future.  Remembrance saves a people’s soul from whatever or whoever would attempt to dominate it or use it for their interests.  When individuals and communities are guaranteed the effective exercise of their rights, they are not only free to realize their potential, they also contribute to the welfare and enrichment of society.

In this place which is symbolic of the American way, I would like to reflect with you on the right to religious freedom.  It is a fundamental right which shapes the way we interact socially and personally with our neighbors whose religious views differ from our own. Religious freedom certainly means the right to worship God, individually and in community, as our consciences dictate.  But religious liberty, by its nature, transcends places of worship and the private sphere of individuals and families.

Our various religious traditions serve society primarily by the message they proclaim.  They call individuals and communities to worship God, the source of all life, liberty and happiness.  They remind us of the transcendent dimension of human existence and our irreducible freedom in the face of every claim to absolute power.  We need but look at history, especially the history of the last century, to see the atrocities perpetrated by systems which claimed to build one or another “earthly paradise” by dominating peoples, subjecting them to apparently indisputable principles and denying them any kind of rights.  Our rich religious traditions seek to offer meaning and direction, “they have an enduring power to open new horizons, to stimulate thought, to expand the mind and heart” (Evangelii Gaudium, 256).

They call to conversion, reconciliation, concern for the future of society, self-sacrifice in the service of the common good, and compassion for those in need.  At the heart of their spiritual mission is the proclamation of the truth and dignity of the human person and human rights.

Our religious traditions remind us that, as human beings, we are called to acknowledge an Other, who reveals our relational identity in the face of every effort to impose “a uniformity to which the egotism of the powerful, the conformism of the weak, or the ideology of the utopian would seek to impose on us” (M. de Certeau).

In a world where various forms of modern tyranny seek to suppress religious freedom, or try to reduce it to a subculture without right to a voice in the public square, or to use religion as a pretext for hatred and brutality, it is imperative that the followers of the various religions join their voices in calling for peace, tolerance and respect for the dignity and rights of others.

We live in a world subject to the “globalization of the technocratic paradigm” (Laudato Si’, 106), which consciously aims at a one-dimensional uniformity and seeks to eliminate all differences and traditions in a superficial quest for unity.  The religions thus have the right and the duty to make clear that it is possible to build a society where “a healthy pluralism which respects differences and values them as such” (Evangelii Gaudium, 255) is a “precious ally in the commitment to defending human dignity… and a path to peace in our troubled world” (ibid., 257).

The Quakers who founded Philadelphia were inspired by a profound evangelical sense of the dignity of each individual and the ideal of a community united by brotherly love.  This conviction led them to found a colony which would be a haven of religious freedom and tolerance.  That sense of fraternal concern for the dignity of all, especially the weak and the vulnerable, became an essential part of the American spirit.  During his visit to the United States in 1987, Saint John Paul II paid moving homage to this, reminding all Americans that: “The ultimate test of your greatness is the way you treat every human being, but especially the weakest and most defenseless ones” (Farewell Address, 19 September 1987, 3).

I take this opportunity to thank all those, of whatever religion, who have sought to serve the God of peace by building cities of brotherly love, by caring for our neighbors in need, by defending the dignity of God’s gift of life in all its stages, by defending the cause of the poor and the immigrant.  All too often, those most in need of our help are unable to be heard.  You are their voice, and many of you have faithfully made their cry heard.  In this witness, which frequently encounters powerful resistance, you remind American democracy of the ideals for which it was founded, and that society is weakened whenever and wherever injustice prevails.

Among us today are members of America’s large Hispanic population, as well as representatives of recent immigrants to the United States.  I greet all of you with particular affection!  Many of you have emigrated to this country at great personal cost, but in the hope of building a new life.  Do not be discouraged by whatever challenges and hardships you face.  I ask you not to forget that, like those who came here before you, you bring many gifts to your new nation.  You should never be ashamed of your traditions.  Do not forget the lessons you learned from your elders, which are something you can bring to enrich the life of this American land.  I repeat, do not be ashamed of what is part of you, your life blood.

You are also called to be responsible citizens, and to contribute fruitfully to the life of the communities in which you live.  I think in particular of the vibrant faith which so many of you possess, the deep sense of family life and all those other values which you have inherited.  By contributing your gifts, you will not only find your place here, you will help to renew society from within.

Dear friends, I thank you for your warm welcome and for joining me here today.  May this country and each of you be renewed in gratitude for the many blessings and freedoms that you enjoy.  And may you defend these rights, especially your religious freedom, for it has been given to you by God himself.  May he bless you all.  I ask you, please, not to forget to pray for me.

PREVIOUS: Even outside cathedral’s doors, pope’s words sank into hearts

NEXT: Pope encourages immigrants, and their gifts, in Philadelphia speech