Pope encourages immigrants, and their gifts, in Philadelphia speech 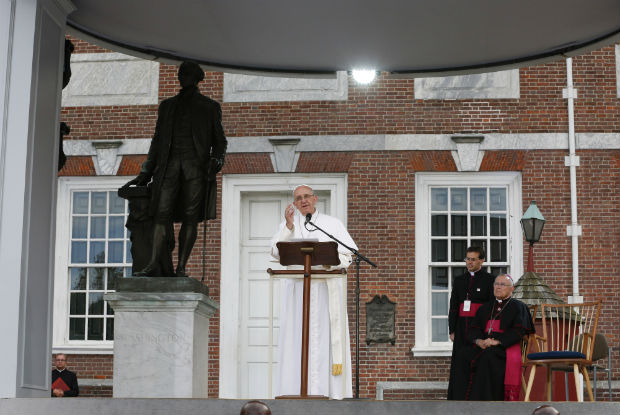 With Pope Francis’ first official visit to the United States, the “Francis Frenzy” continued Saturday afternoon, Sept. 26, at the “birthplace of freedom” — Independence Hall in Philadelphia.

The pope’s remarks concerning religious freedom and immigration underscored his wish to welcome every person into the Church. (Read the text of his speech here.)

In his speech, Pope Francis emphasized the need for every voice to be heard, and for every human life to be respected.

“All too often, those most in need of our help are unable to be heard,” he told the crowd of approximately 40,000 people sprawled on the grassy Independence Mall area, facing the historic hall. “You are their voice, and many of you have faithfully made their cry heard. In this witness, which frequently encounters powerful resistance, you remind American democracy of the ideals for which it was founded, and that society is weakened whenever and wherever injustice prevails.”

Dr. Lesly D’Ambola watched the pontiff’s speech from Franklin Square, where a Jumbotron was set up. She was particularly moved by Pope Francis wanting to speak on these topics, because immigration has touched much of her professional career.

As director of operations at St. Luke’s Catholic Medical Services in Camden, N.J., D’Ambola explained that she “has a lot of undocumented patients, who are definitely not looking for a handout, but they are coming here because they really want a better life.”

In part of his address, Pope Francis spoke directly to immigrants, reassuring them: “Many of you have emigrated to this country at great personal cost, but in the hope of building a new life. Do not be discouraged by whatever challenges and hardships you face. I ask you not to forget that, like those who came here before you, you bring many gifts to your new nation.”

Pope Francis gave his speech in Spanish from the same lectern that Abraham Lincoln used to deliver the Gettysburg Address. Before the address, he blessed the Cross of the Encuentros, a five-foot-tall wooden cross that represents Hispanic and Latino Catholics in the U.S. and their faith journeys — an important gesture, considering that 40 percent of all Catholics in the U.S. are Latino.

Given the recent refugee crisis involving Syria and Europe, and the ongoing demands for immigration reform in the U.S., it was only logical that Pope Francis would speak at length about the human side of these issues at length.

Emilia Otte, a student at Bryn Mawr College attending the papal address, said, “a lot of people make (immigration) seem political because of the upcoming elections, but it’s really pretty simple: feed the poor, work for peace and love. Sometimes people are missing the point.”

College students seem to be drawn to papal visits, present and past. D’Ambola and her friend, Maura Markiewicz D’Arcy, were both students at St. Joseph’s University during the last papal visit to Philadelphia by St. John Paul II in 1979. D’Arcy recalls seeing the pope throwing a frisbee to a dog on the lawn of the cardinal’s residence from her dorm, and shares similar excitement about another pope coming to Philadelphia.

“I was volunteering at the World Meeting of Families conference this week, and people are so happy and energetic” about Pope Francis’ visit, she said. “You can feel it, and it spreads.”

D’Ambola was also particularly enthused about a Jesuit pope visiting Philadelphia, especially since Pope Francis focuses on issues prominent in this country and the world that deal with poverty and injustice.

“As Christians,” she said, “we are called to welcome the poor and the stranger — it’s almost against Christianity not to. People forget that we’re all a country of immigrants.”

Pope Francis ended the address by leading the crowd in praying the “Our Father” in English, and asked that everyone remember to pray for him.

NEXT: Party for thousands fills night with music, words of Pope Francis