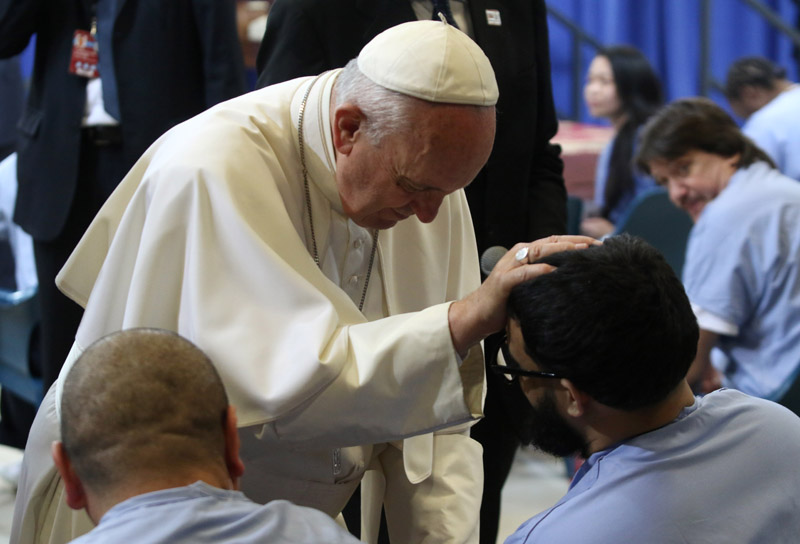 Pope Francis spent about an hour at the Curran-Fromhold Correctional Facility. He entered the gymnasium from behind a blue curtain, walking up on to the small stage and carefully inspecting the large chair the inmates had made for him. He turned, with a big smile across his face, and gave the inmates a sincere Pope Francis thumbs up.

As the U.S. debates the need for penal reform, Pope Francis said prisons must focus on rehabilitation, and he insisted that no one is perfect and without need of forgiveness. While his speech was addressed primarily to the inmates, a small group of their family members, prison officials, state legislators and city officials, including Philadelphia Mayor Michael Nutter, also attended.

About 20 minutes before the pope arrived — ahead of schedule — Nutter greeted each of the inmates, who were wearing dark slacks and light blue scrubs, as they were led into the gym. Michele Farrell, prison warden, later told Catholic News Service that the pope “threw us a curveball by showing up early.” 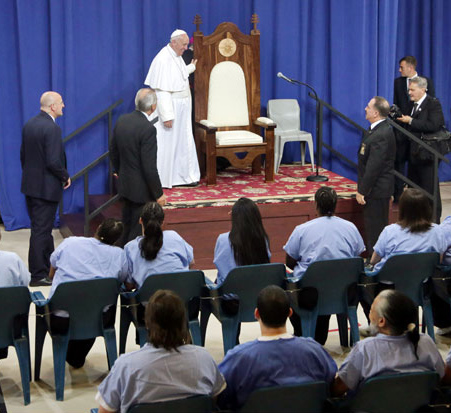 The inmates were told to stay seated, and reporters, who were behind them, were told they could not speak to the inmates until after the pope left.

The prisoners, who were chosen from among those with records for the best behavior, “are as excited as can be,” Deacon Dymek said. “This visit is hopefully inspiration for them to lead better lives.”

Pope Francis addressed the inmates in Spanish, “not English because I do not speak it well.” However, he said, his aide, Msgr. Mark Miles from the Vatican Secretariat of State, “does” speak well.

The pope also told the inmates he was visiting as a pastor, “but mostly as a brother.”

Serving time in prison is a painful time, said the pope, who continues to speak on the telephone with inmates he used to visit in Buenos Aires, Argentina. “Any society, any family, which cannot share or take seriously the pain of its children and views that pain as something normal or to be expected, is a society ‘condemned’ to remain a hostage to itself, prey to the very things which cause that pain.” 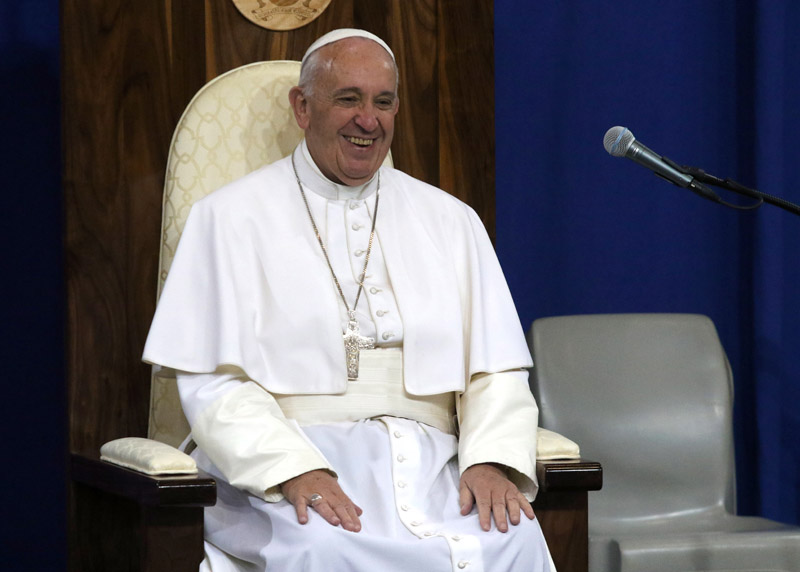 Pope Francis insisted Jesus “teaches us to see the world through his eyes — eyes which are not scandalized by the dust picked up along the way, but want to cleanse, heal and restore. He asks us to create new opportunities: for inmates, for their families, for correctional authorities, and for society as a whole.”

The pope spoke to the inmates about Jesus washing his disciples’ feet, explaining that back in those days, people wore sandals and the roads were dusty. Everyone needed to have his or her feet cleaned. Often there were pebbles and stones, too, which hurt.

“Life is a journey, along different roads, different paths, which leave their mark on us,” the pope said. “We know in faith that Jesus seeks us out. He wants to heal our wounds, to soothe our feet, which hurt from traveling alone, to wash each of us clean of the dust from our journey.”

Jesus, the pope said, “doesn’t ask us where we have been, he doesn’t question us what about we have done.” Instead, Jesus washes peoples’ feet and gives them life. 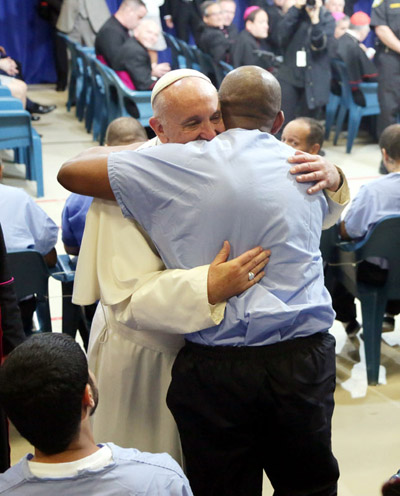 “The Lord goes in search of us; to all of us he stretches out a helping hand,” the pope said. “It is painful when we see prison systems which are not concerned to care for wounds, to soothe pain, to offer new possibilities.

The pope urged the prisoners to dedicate their time in prison to “getting back on the right road” and preparing to rejoin society.

After the pope left, Heriberto Mejia, a prisoner who uses a wheelchair, told CNS he asked the pope to pray for him.

“I feel so good. God has changed my heart,” said Mejia, who is awaiting trial on drug charges. “After this visit, we have to have to do better. … We can’t go back to doing things the same way.”

Dechon Adams, who was charged with a weapons offense, called it “beautiful” that the pope took the time to greet each prisoner — 11 women and close to 60 men — and offer his blessing.

Adams, who identified himself as Christian, agreed with Pope Francis’ explanation of Jesus’ washing the disciples’ feet.

“We all need cleansing,” Adams said.

After 19 months in prison, the 23-year-old said the experience has been tough on both him and his family, though he’s found solace in faith.

“It’s harder for my family than me. It’s hard for them to see me like this,” he said.

“This is the most time that I’ve had to reflect and pray … get close to Jesus,” Adams said. “That’s all you can do.”

PREVIOUS: Scenes from the papal visit in Philadelphia